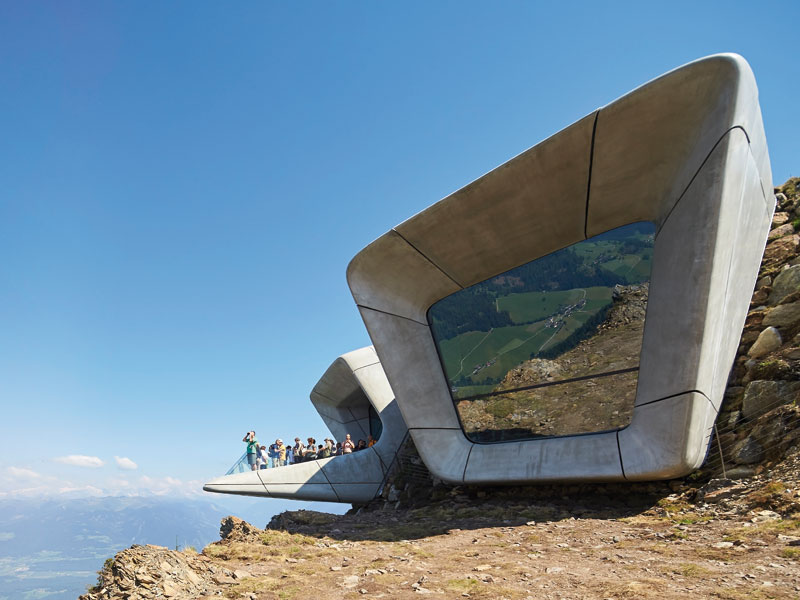 The latest Zaha Hadid project is modest in size and half-invisible from the outside. Situated in an Italian mountainscape, the Messner Mountain Museum bridges one of her earliest designs with her most recent

Enter a Tube station and the only way is down. So it is with mountain tops. Entering the new 1,000 sq m Messner Mountain Museum (MMM), on the edge of the 2275m-altitude Corones mountaintop plateau in Italy's South Tyrol, the recessed light strips in the ceiling plunge forward and down, as if into an escalator shaft.

For a moment, you might think platforms and trains await below. But this sloping shaft leads to space, light and nature on an epic scale. The lines of light arc down over three levels of exhibition display and diverge towards three great windows facing straight out to the mountains opposite, one with a balcony cantilevering 6m into the void. The museum has burrowed through the mountain to emerge on the other side, not once but three times. Beyond the museum's entrance, with its ticket office at the aperture on the left, the museum interior form plunges down

A crowd delivered by cable car was in attendance at the MMM Corones opening in July. The museum's facade and roof were concealed by a blue cloth by local fabric company Moessmer. The cloth was held down by ropes, deliberately referencing Christo and Jean-Claude's wrapped buildings. The angular blue shape suggested a ship emerging from the small peak on the edge of the plateau. Patrik Schumacher, Zaha Hadid's design partner at the practice ZHA, stood on a stage beside it and said that Hadid's idea was 'to make architecture more like landscape'. He continued that this, their latest project, was similar to one of her first designs from 1983: The Peak, an unbuilt leisure club in the exclusive area high above Hong Kong's Central district.

It is similar... but different. Back then Hadid produced paintings that conveyed her visions. They were full of fragmented assemblies of elements, caught in freeze-frame as they rushed across warped landscapes with deliriously tilting horizons. The abstract geometries of Malevich's suprematism were her inspiration. In the deconstructivist architecture emerging at the time, hers was almost literal - blocks and shards in an explosion. Her first built project, the Vitra Fire Station (1993) in Weil am Rhein, Germany, conveys the essence of this in concrete, its angular dynamics breaking out from its site. But her earlier vision for The Peak was part of a wider landscape. She describes the location as having 'a Suprematist geology' into which 'the architecture is like a knife slicing through the site... defying nature and taking care not to destroy it'. The second level below the entrance is an exhibition terrace. Vitrines are integrated into the surfaces, such as the one on the left

Nowadays by contrast ZHA designs express not so much frozen fragmentation as fluidity. Gorgeous curves and flowing space, not sharp angles and solid tectonics, characterise projects such as London's Aquatics Centre (only revealed without its temporary wings in 2013), the tour-de-force folding form of the Heydar Aliyev Centre in Baku and the new St Mary's College Middle East Centre in Oxford (2015). Stairs from the second lower level pass a vitrine integrated into the wall. A ramp continues down, towards the cinema

In these examples, Hadid and Schumacher have drawn inspiration from pioneers of curving shell structures, such as Felix Candela and Heinz Isler, and the tensile structure master Frei Otto, recipient posthumously of this year's Pritzker Prize.

Where does the Messner Mountain Museum lay in this evolving spectrum of ZHA forms? All would be revealed when the blue wrap was pulled off it in July. But first, there were speeches, mainly in German (which is spoken in the Italian South Tyrol) or Italian, although one man spoke in the nearby valleys' regional language Ladin. Schumacher spoke in English, revealing that the project had started (in 2012) as just a platform, but said that Reinhold Messner, the legendary mountaineer and first to climb Everest without oxygen, had wanted 'to carve into the mountain'. Schumacher used a German word to describe the finished result: 'Gesamtkunstwerk', meaning a unitary artwork. Finally, Messner himself spoke, calling the museum a 'Kunstberg' (art mountain) and saying that the project was possible only with Zaha Hadid. This was the sixth and final of his South Tyrol museums, and dedicated to the 'supreme discipline of mountaineering'. He asked: 'Where is mountaineering going when tourists arrive at the peak of the world, Everest? This museum is the answer.'

The blue cloth was released and fell away, and the entrance structure revealed. A great trapezoid of panelled concrete thrusts out, leans forward and tilts sideways, in a classic deconstructivist gesture. But the facade is not just a composition of skewed planes, or Hadid's familiar dynamic of upward-reaching angularity. Corners are rounded, softening the form. A mirrored surface is recessed across the main facade, with a simple entrance from the Corones plateau, at this point at an elevation of 2,260m. A narrower facade and door is to its side. These adjacent portals into the rock are like the air intakes on a scramjet, but there is also a sense of mass that gives them monumentality. The continuous concrete-lined interior begins with the reception, a space sandwiched between a wide-trapezoid bank of lockers and (beyond an iron lion statue) an aperture containing the ticket office. At the back of this, an aperture reveals one of many mountain paintings in the museum, mounted in the fire-escape passage to the side door at the front.

A large, angular, centrally placed, resin-coated steel vitrine reveals its contents upwards through a window - it is the first of a surprising variety of vitrines in the museum, displaying Messner's collection of historic mountaineering equipment. Beyond it and beneath the ceiling light strips lies a small cascade of descending levels, each further forward than the previous. The first is a modest landing with mountain paintings on the walls. A nook housing sparkling minerals is tucked under the stairs, like a small cavern. The second terrace down is larger and has white models of mountains that thrust glacially to eye-level by German sculptor Stephan Huber, and a larger nook housing a golden statue of Buddhist yogi Milarepi from Nepal. Two staircases diverge to the lowest level. Linear vitrines are embedded in their walls and balustrades, and are flush to them. Parallel to the descent through the galleries is the linear fire escape passage of stairs, descending to toilets at the lowest level. There, beneath the gallery terrace, is an exhibition space-cum-lobby for the adjacent 20-capacity cinema/auditorium, which has simple tiers cut for seating and lighting emerging from parallel step-cuts across its side walls and ceilings. Outside it large vitrines embedded into the walls extend and widen out to the sharp corners between the diverging passageway ramps, like jaws opening. Along one passage is a third nook with three stools, a puzzle for children, and a friendly yeti. The three passages radiate away towards the great trapezoid windows. Each frames a particular aspect of the Dolomites - the peaks of the Heligkreuzhofel and Peitlerkofel, and the sweep of the South Tyrol. They bring a flood of light into the sloping chamber in which the entire museum is configured. Two are angled to face slightly downward, while the third is vertical and opens into the balcony terrace - a sharp, streamlined protrusion with glass barriers.

The three openings are best understood from the outside. As with the entrance structure, their edges are rounded and they are clad with concrete-fibre panels mounted over steel substructure, but they are skewed more subtly. The dark glazing, like screens, makes them like giant monitors emerging from the rock. Again, there is a surreal, futuristic monumentality. It is as if the mountain itself had opened eyes to look out across the jagged vista all around.

The MMM is not the only building on the Corones mountain plateau, also called Kronplatz. There is the huge Concordia Peace Bell (2000) in a structure designed by Paul de Doss-Moroder, high-tech cable-car termini, two restaurant buildings, chalets, and even a cluster of teepees. But nothing else burrows into the mountain, like Hadid had wished to do in Hong Kong 33 years ago. Maybe there's a touch of Eero Saarinen's 1962 TWA Terminal interior, but like a Tube station, MMM Corones is more of a hollow than a building. Some 4,000 cu m of rock were excavated for it, and the structure covered over. Most of the architecture is within a concrete shell, between 40cm and 70cm thick, which only reveals its inner surface. (Its coat of insulating rock has helped it gain the local CasaClima environmental certification). ZHA's ROCA Gallery (2011), a chain of fast-flow-eroded caverns in shiny futuristic white, also carves out about the same square metres of internal space as at Corones, albeit below a block of flats rather from solid ground.

The museum has its internal fluidity, but within the timeless geological mass all around it is something conveyed by the grey solidity of its concrete surfaces. The lightness that ZHA found in recent thin-structure volumes is irrelevant inside a mountain, but nevertheless the multilevel flow of surfaces and the use of embedded light strips to suggest movement is shared with works such as the Heydar Aliyev Centre.

Meanwhile, the way the sharp angles - in the emerging elements (entrance and windows) and various corners (corridors, apertures, vitrines) inside - are rounded chimes with the tempered angularity of, say, Hadid's Pierresvivres. Taking into account the distant echo of The Peak concept, MMM Corones relates to the entire span of the ZHA portfolio. ZHA has not had an entirely smooth ride lately. The Tokyo National Stadium, won in competition against the likes of Toyo Ito and SANAA, was cancelled after problems beyond ZHA's control. More generally, suspicion has replaced awe when it comes to grand, iconic designs, especially when they call on public money. MMM Corones is not one of those. It's modest in scale and privately funded. This April, in his statement In Defence of Stars and Icons, Schumacher said starchitects 'became stars for good reasons and they have to perform to remain on top'. On top is where the mountain museum is, and it shows that Hadid and Schumacher are very much performing. ZHA has lost none of its ability to meet and adapt an unusual brief, and produce a result to astonish.