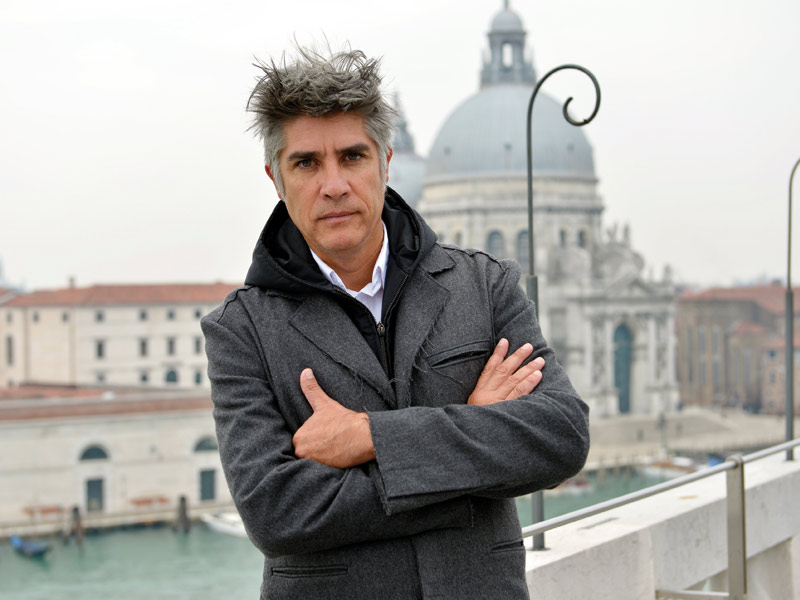 Ahead of our full coverage in the next Blueprint (347), we preview some of the highlights of the 15th Venice Architecture Biennale, curated by this year’s Pritzker Prize winner, Chilean architect Alejandro Aravena. Running until November, the theme Reporting from the Front focuses on frontlines across the world where architects and communities are faced with complex challenges and urban issues

Inspired by an image taken by Bruce Chatwin of German archaeologist Maria Reiche perched on a ladder looking over the Nazca Lines in Peru, Chilean architect Alejandro Aravena's concept for the 15th Venice Architecture Biennale aims to offer new points of view on the social, political and economic issues that architecture responds to.

Entitled Reporting from the Front, the exhibition focuses on the work of people - read not necessarily just that of elite architects - facing issues such as poverty, lack of sanitation, housing shortages, natural disasters, crime and pollution. One of the most political of the architecture biennales so far, it attempts to open up the conversation around architecture to a broader audience, involving individuals, the public and communities in the decisions and actions through which our spaces are created.

It is an agenda that the socially engaged architect Aravena has been developing since he formed his practice and 'Do Tank' Elemental back in 2001. Past projects include his 'half' houses in northern Chile that allowed residents to design their own homes and finish the buildings in their own time, as well as the reconstruction of the city of Constitución following the earthquake that hit Chile in 2010. Believing that the advancement of architecture is not a goal in itself, but a way to improve people's quality of life, Aravena asked practitioners to report from and share stories of positive outcomes where 'architecture did, is and will make a difference'. 'Given the complexity and variety of challenges that architecture has to respond to, Reporting from the Front will be about listening to those that were able to gain some perspective and consequently are in the position to share some knowledge and experiences with those of us standing on the ground,' says 49-year-old Aravena. 'Improving the quality of the built environment is an endeavour that has to tackle many fronts: from guaranteeing very concrete, down-to-earth living standards to interpreting and fulfilling human desires, from respecting the single individual to taking care of the common good, from efficiently hosting daily activities to expanding the frontiers of civilisation.'

Running until the 27 November, the biennale includes 62 national participants responding to Aravena's theme in the Giardini pavilions and Arsenale as well as across Venice. Five countries are taking part for the first time (Nigeria, Kazakhstan, Philippines, Seychelles and Yemen). Aravena's own exhibition, laid out from the Central Pavilion in the Giardini to the Arsenale, involves 88 participants from 37 countries, including 33 architects under the age of 40.

There are three Special Projects to keep an eye out for. These include an exhibition titled A World of Fragile Parts that explores the threats facing the preservation of global heritage sites and the production of copies of cultural artefacts, curated by the V&A and designed by Ordinary Architecture at the Sale d'Armi in the Arsenale. Also representing London, an exhibition led by Ricky Burdett, director of LSE Cities, provides insights on the major trends and conflicts experienced in today's urban realm, including exponential growth, erosion of public space and increasing inequality, while a show curated by architect Stefano Recalcati analyses urban regeneration projects of industrial ports, focusing in particular on Venice's own Porto Marghera. Highlights from the national pavilions includes the British Pavilion's Home Economics exhibition that tackles the frontline of British architecture - the home - by curatorial team Jack Self, Finn Williams and erstwhile Blueprint assistant editor Shumi Bose. They have invited emerging artists, architects and designers to create immersive 1:1 environments that challenge the status quo and propose new futures for the home. Ignoring the sleek high-rises and smart condos that have come to define its cities, the UAE Pavilion looks at a basic Seventies' social housing model called Sha'abi that has been adapted and modified by Emirati residents to become individual homes, bringing to mind Aravena's flexible Chilean half houses.

Australia's pavilion, curated by the all-female Aileen Sage Architects, uses the pool, both natural and manmade, to explore Australian cultural identity. Central to the Dutch pavilion is research into the architecture of the UN's peacekeeping missions and military bases in war zones, while the Finns will analyse housing solutions for asylum seekers.

In choosing Alejandro Aravena as curator, this year's architecture biennale promises to be a very timely debate on the issues and challenges that threaten our built environment, and most importantly, the people occupying them.