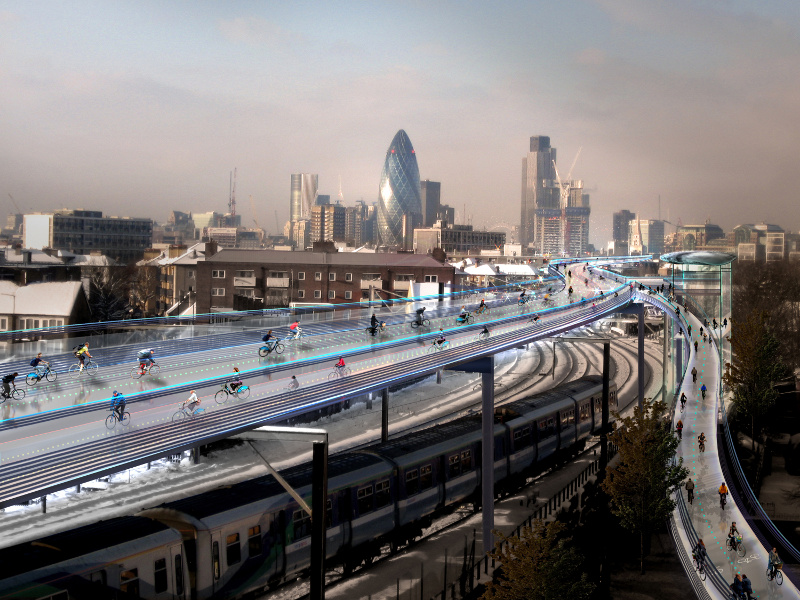 Blueprint editor and cyclist Johnny Tucker on SkyCycle, a new idea by Foster + Partners that could see a network of raised cycle paths across London

Move over New York with your Highline, here's comes London and its even-higher-line - a network of cycle paths over existing railway lines proposed by Norman Foster and friends...

It's a nice, if improbably expensive, thought and there's always room for this kind of thinking outside the yellow-criss-crossed-box.

Called SkyCycle, the idea is to build 200km of cycle-only roads directly above the railway lines in the capital. There would be 200 access points to this network and each of the 10 routes would be able to accommodate up to 12,000 cyclist per hour.

The project is the brainchild of Exterior Architecture, Foster + Partners and Space Syntax.

I've cycled all over this fair city regularly commuting on my bike for more than a decade. I've witnessed cycling conditions grow ever worse as more and more bikes take to the road. Officially, over the last 10 years "on major roads" the number of cyclists has increased by 173 per cent.

It's way more than that in London, take it from me.
While the actual percentage of halfwits on two wheels has probably stayed the same, with increasing numbers come ever-more two-wheeled menaces.

This percentage in turn engenders an increased level of road rage among that not inconsiderable percentage of half-witted, often youthful and male drivers, trolling the streets.

Any positive change to this would be welcome, as it's not currently a recipe for success and this somewhat bitter commuter soup turns sourer every day. (The flavour is also adversely affected by the handful of bus drivers who also seem to take people cycling as a personal affront.)

The reality is that London is not a great city to cycle in and you really have to have your wits about you. It would be nice not to have to ride a bike and your luck every day...

So being extricated from this melee and raised into the sky would be welcome. That said, I can foresee a few issues with this latest scheme. For one it's going to be quite a steep climb up the ramps to some of these raised railway lines. Once you're up there it's going to be damn windy, except on the loveliest of days, which, like cyclist who respect red traffic lights, seem to be few and far between these days.

It will no doubt also need to be segregated as well, to stop cyclist getting on each others nerves now they don't have the cars to swear at. It will need lanes to segregate the Lycra-louts traveling à toute vitesse, from the be-suited Brompton boys and the day-glo framed, white wall-tyred, fixed-wheel freaks.

They in turn will be traveling that little bit faster than the heavily panniered brigade, who will themselves be out-pacing the hipsters on their unfeasibly old and noisy, clapped-out crapcyles.

My final thought is that because they are following railway lines, all these new cycle lanes will be heading into a few major hot spots. It would be nice if we all worked at King's Cross, Liverpool Street, Victoria et al, but we don't. So what happens at these hubs, as thousands of extra riders, tempted by the easy cycle in, now disgorge back onto the streets to fill up the 1m-wide bike lanes? Isn't that just going to make things worse?