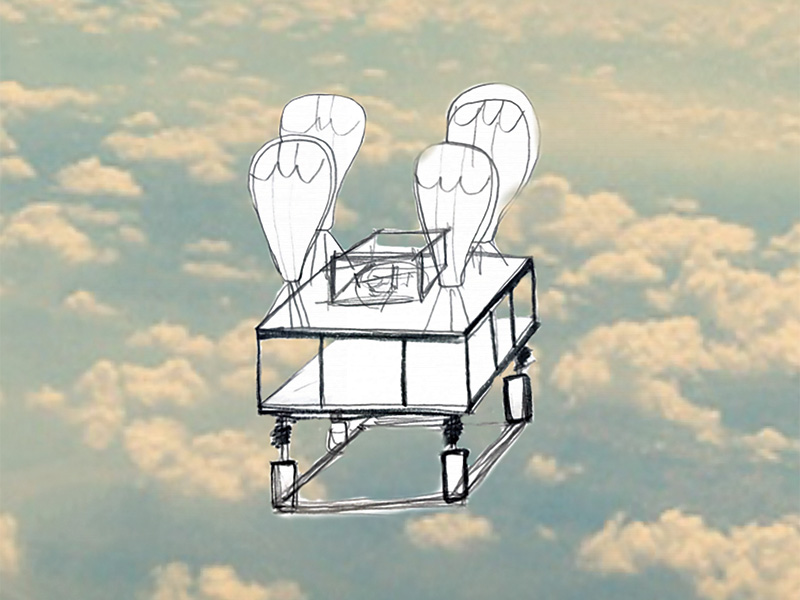 says Rio Kobayashi, inspired by the view out of a plane window

Every time I am in a plane and look out of the small window I can see a beautiful space filled with clouds or a sky holding millions of stars and planets. During these times I always get the idea to create or design a floating house or hotel room. If you have seen the film Castle in the Sky, by Hayao Miyazaki, you might be able to imagine this idea more easily.

Floating in the sky would mean you might see the whole world from a different perspective. And if you are able to get a different perspective, you could get new ideas. You might realise that you are paying attention to the little things. You might instead start to think about bigger things, for example how amazing nature is, or be amazed by the stars above the clouds, or realise that you don’t see the borders between countries and realise there is no point in fighting.

Life is short. Why are we stressed about daily life? Why are we trying to compete with others? It’s better to come to the house in the clouds and enjoy the ride, the birds on the horizon or the view, while reading an exciting book or listening to Bolerish by musician Ryuichi Sakamoto. And then we can watch the sun going down.

If people could spend more time surrounded by peace and beauty the world at large could be peaceful and beautiful. I think everything is possible if you believe in it. Could someone realise this project... Airbnb maybe? Austrian-Japanese designer Rio Kobayashi grew up in Japan. At 18 he left for Austria where he completed an apprenticeship in cabinet making. He worked in design studios, workshops and artist studios in Milan, Berlin, Tokyo and Paris before setting up a studio and his own workshop in London. He was shortlisted for the Milano Design Award 2016.