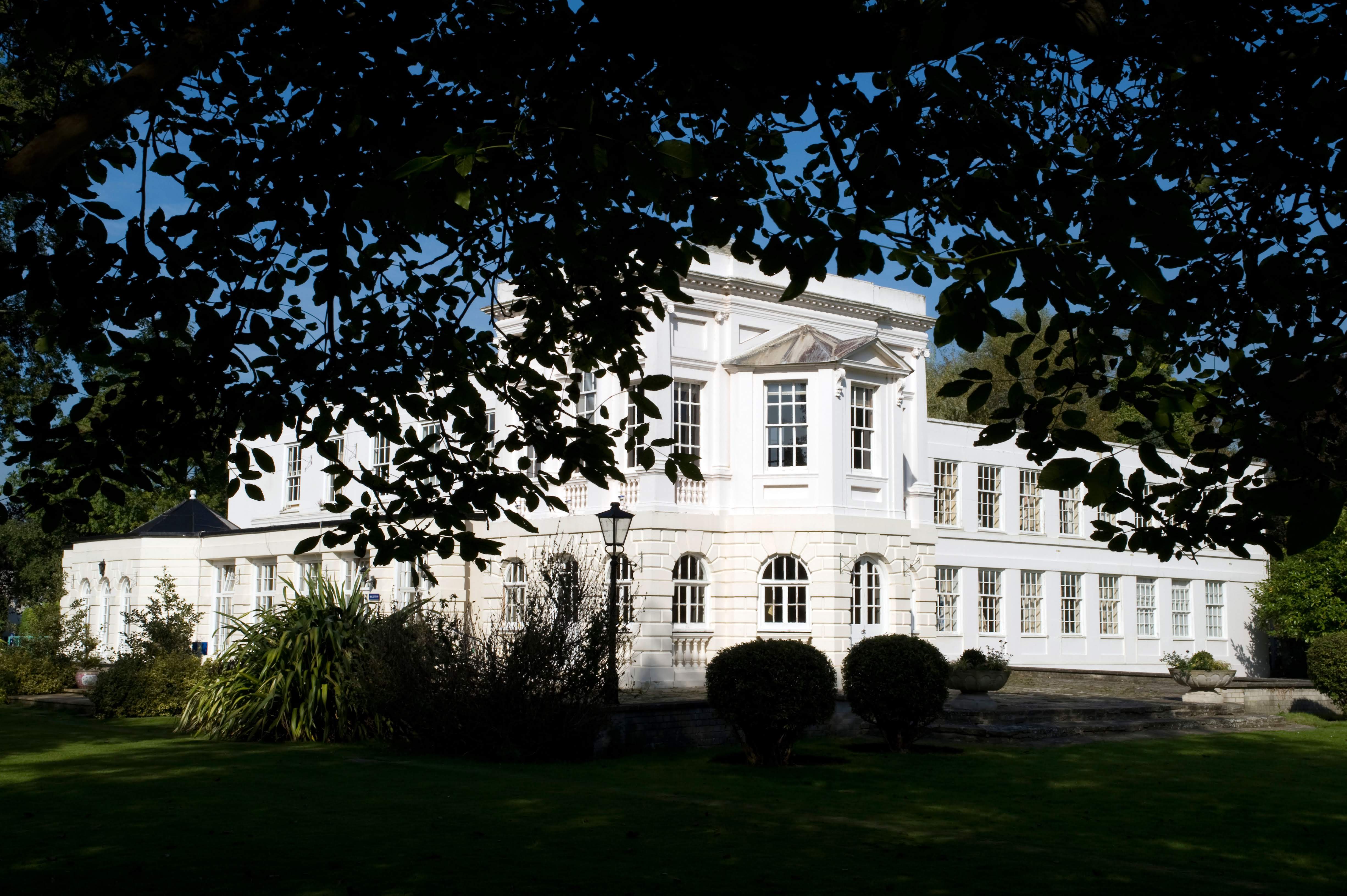 Monkey Island Estate, the latest offering from YTL Hotels’ collection of luxury destinations, has finally opened – and though it might have missed its original launch date, the new hotel was certainly worth the wait. Set on an island moments away from the picturesque, culinary town of Bray, Monkey Island Estate is one of YTL’s more unique projects; it had been a hotel for years but was in need of serious renovation when YTL’s founder, Yeoh Tiong Lay, first visited the property.

After Lay fell in love with the estate, YTL Hotels acquired Monkey Island. The group was intent on reverting it to its former glory, bringing in long-time creative partners, New York-based interior design studio, Champalimaud, to spearhead the refurbishment. Unfortunately, Lay passed away before the project’s completion – though he was never able to see the finished result, in his memory YTL have created a brass statue of his likeness, which looks over the river in pride of place on the island. Having previously worked on many of the YTL Hotel’s other luxury properties, including Bath Spa’s Gainsborough Hotel, Champalimaud were perfectly placed to create the new look for Monkey Island Estate. However, the design team faced a multitude of challenges for the project, including the fact that both buildings on the island are Grade-I listed, with the land itself being part of the Green Belt; Champalimaud employed several art historians and experts to help them bring the island back to its former glory.

Arriving at Monkey Island Estate, guests are first greeted at the Boat House, which is a brand new addition to the hotel on the mainland. Also new is the Barn on the Bray, an 11-bedroom collection of guest rooms for guests who wish to stay at the Estate, but have been unable to book a room on the island itself. Here, Champalimaud has used herringbone style carpets and a design that is reminiscent of the team’s work at The Academy in London. Crossing a footbridge over the calm waters of the Thames, as guests make their way onto the island the eye is immediately drawn to the two extraordinary buildings that house the hotel’s on-island accommodation and public spaces  – both of which date back to the early 1700s. On the right, the white-bricked Temple building holds all guest rooms. There is only one suite on the island, called the Wedgewood; a magnificent room full of history, it features an ornate ceiling, dark wood panelling and enviable views over the estate.

“All of our rooms are quite snug,” says Monkey Island Estate’s general manager, Lee Kelly. “Some are river terrace rooms, which have the advantage of outside space looking over the Thames. They’re all very bright, and have double sash windows.” While designing the guest rooms, Champalimaud were forced to contend with the low ceilings and small floor plans, but the team embraced each space, filling them with sophistication and charm, as well as bringing them up to date with all the amenities a 21st Century guest will need during their stay. Meanwhile, the second building on the island – the Pavilion building – hosts a range of spaces for both guests and locals to enjoy. Kelly explains that, as the Estate is only moments away from the culinary town of Bray, YTL chose to “complement the other dining options in Bray, rather than compete”, when it was creating the hotel’s dining option. Developed as a “great British brasserie”, the Monkey Island Brasserie has been designed to complement the architecture of the room, including the vaulted ceilings and classic French doors, which look out onto the terrace and Thames.

An open plan kitchen sits to one side of the expansive room; Champalimaud have ensured that there’s no bad seat in the house with its placement of the tables and the leather booths for larger parties, which hug the inner wall of the restaurant. Half the space features floor-to-ceiling windows, letting in an abundance of natural light, while the inside walls have been decorated with a statement turquoise wallpaper, matched with a wooden herringbone floor and ceilings painted a bold yellow. Moving through from the restaurant into the hotel’s signature bar, the Monkey Bar, guests will find an elegant space that Champalimaud has filled with plush armchairs, hints of blues and reds, and leather bar stools in front of a sophisticated, black bar counter. If this wasn’t enough, beside the Monkey Bar is one of the most unusual and spectacular rooms on the Monkey Island Estate: the Monkey Room. A Grade-I listed lounge, the Monkey Room is the perfect place to relax – but guests might find themselves staring endlessly at the ceiling, which features several monkey-inspired 17th Century frescos that have been beautifully restored by the design team. “The frescos were so dark – almost black – before the renovation because of the cigar smoke and log fire. One of the sections was found in a bucket,” Kelly mentions. “The team were in here for about eight months, putting everything back to the way it was, bringing the shine back and taking off the grime.”

To complete the look of the historic room, Champalimaud have added velvet armchairs in front of the marble fireplace – which now, instead of an open hearth, features a wood burning stove. The design team also chose light lavender walls for the space, and have polished and renewed the wood finishes, making the room feel cosy and calm. But the Monkey Room isn’t the only secret gem of the Estate. Directly above the frescos lies another room, which guests can access by climbing a by a tight, steep curving staircase. Called the Whiskey Snug, Kelly explains that the small room will open in the coming months as a winter venue. ““There is a speakeasy feeling to it,” he says, “It’s very eclectic now, and it’s even going to get wilder!” Within the Whiskey Snug, Champalimaud used a maximalist style effortlessly, contrasting a bold statement wallpaper with a bright red, patterned carpet, making the two elements seamlessly work together. The room will certainly be a draw for guests looking for somewhere to take their night-cap during the cold winter months.

Other rooms in the Pavilion building include a collection of meeting rooms and two ballrooms, the largest of which, the Marlborough ballroom, YTL hopes will be perfect for weddings. Here, Champalimaud have gone for a more subtle approach, allowing the room’s architecture to take centre stage: the walls have been designed to look like “trellises in a garden” but their mirrored surfaces bounce the light back across the room, to the row of classic French doors. Outside, Monkey Island Estate’s gardens have been created by landscape architects, AV Design, to look like a quintessential English garden, mixing both wild and maintained elements. There are wildflowers in abundance, wide sprawling lawns, various species of trees and hedge rows with different heights, colours and textures. One such botanical garden leads to the Estate’s one-of-a-kind floating spa, which resides in a double-width English canal boat.

“It’s a brand new boat,” says Kelly, “There’s a wheel-house reception area and then you step down into the lovely retail and tincture bar. Further down, there are three treatment rooms and a bathroom/shower room. It’s warm, with hardwood floors, and has a real spa feel – it’s a unique concept that people love.” Part of the reason why the Estate have created the floating spa is down to the difficulty of building a permanent structure on the island itself. However, just as they did with the distinctive spa choice, YTL has found an ingenious way around this challenge with the two other structures on the island, by investing in shepherd’s huts. The first, called ‘Shepherd’s Tipple’, will be used as a bar, so that guests can enjoy drinks on the island’s main lawn. The other, ‘Shepherd’s Delight’, is used to store equipment for another guest activity: stargazing and toasting marshmallows around a warm bonfire.

Though the Estate is less than two hours away from central London, it feels as far from a city as one can get. “You get that sense of being exclusive and away from it all,” says Kelly – and it seems guests agree. Monkey Island Estate may only have opened its doors a few months ago, but it is already seeing huge interest from both local and international guests, as well as being booked for wedding parties. With its beautiful English country gardens, fascinating architecture and history, range of amenities and a relaxed, boutique feel, who couldn’t fall in love with this island on the Thames? Prices at Monkey Island Estate start from £275, per room, per night in a Temple Room.