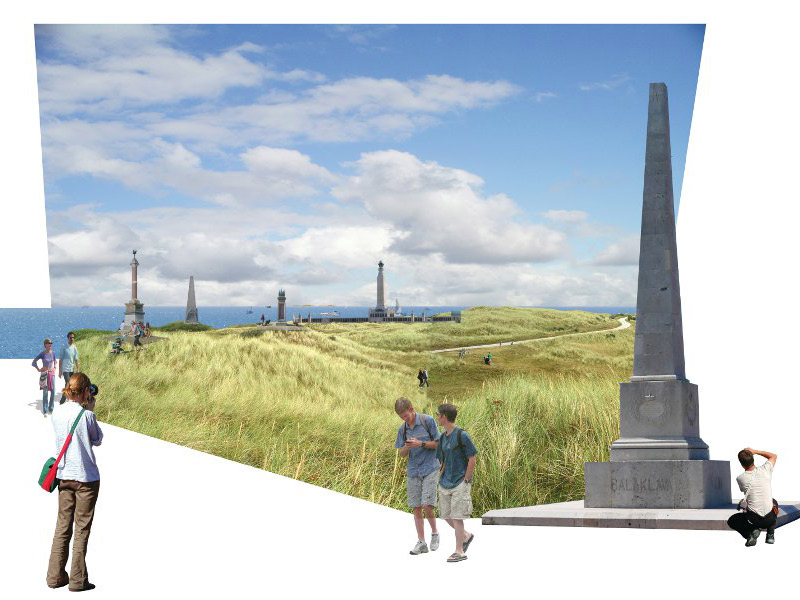 Veronica Simpson is in Portsmouth, looking at good and not-so-good ways of keeping back the sea

Something is rotten in the city of Portsmouth. This strategically and historically significant naval city – Europe’s only island city apart from Venice – is mid-way into an £86.29m sea defence infrastructure project, the major part of which will blight a 4.5km stretch of beach, replacing a sea view that gives pleasure to thousands of residents and visitors with a 3.8m-high concrete stepped barricade. Most likely, it will kill whatever tourist income the businesses at this Southsea end of town currently enjoys.

It may be news to some, but there are better ways to keep the sea at bay these days than this kind of hard engineering. Having recently spent time in Holland, cycling up and down the coast with my family, we saw that this super-smart country – much of it reclaimed from the sea – uses soft landscaping, dunes, dykes and beaches as its primary defence against rising tides, at the same time turning almost the entire coastline into an extended park. Investigating this phenomenon further for FX’s sister title Blueprint, I was told by Bram Bliek, director of Svasek Hydraulics in Rotterdam, that hard infrastructure ‘is not the answer to rising sea levels… We have to work with nature instead of against it’.

One of the innovative projects I featured in my article was a research initiative by architect Walter Menteth, who also lectures at Portsmouth School of Architecture. He brought together 17 young UK and Dutch architecture, engineering and landscape students, mentored by seven international coastal design experts, to investigate a range of enlightened options for providing not just sufficient protection against rising tides but solutions that could add so much more to Portsmouth’s citizens and cityscape. From these ideas, an alternative design strategy was devised, then published and exhibited at Portsmouth Cathedral last summer.

Meetings and discussions were held, gaining support for alternatives to the council’s current sea wall plan. A Southsea Seafront Campaign (SSC) was organised, and a public petition gathered 3,942 signatures requesting that the council rethink its proposal. The council is nontheless sticking with its hard landscaping decision made back in 2012 (though it has agreed to extend the consultation period until the middle of this summer – sceptics think this is purely to mount a more effective PR campaign of its own).

We all have sympathy with the UK’s austerity-afflicted councils. But it is very odd that Portsmouth Council seems reluctant to entertain alternative options, which are not just cheaper but actually bring added benefits for all. Council personnel apparently paid little attention to last summer’s exhibition and proposal. They also turned down invitations to accompany Menteth and his colleagues on their research trip to Holland to see Dutch expertise in action.

They did, however attend one organised by the contractor they have already appointed, Balfour Beatty, to see a similar, hard-engineering, defensive barrier, in Clevelys. This – only two years after it was built – is not performing as intended, and the footings have become exposed through beach erosion. Given the arguments against the current proposal, Portsmouth council's resistance to investigation and exploration has been baffling. As one of the most prominent local campaigners Dr Celia Clark said, when I travelled down to Portsmouth to meet her in April: ‘It’s like fighting a shadow war. We don’t know what we’re fighting.’

Strolling along the seafront with Menteth and Clark (also a specialist in the creative reuse of military sites), the flaws in the council’s proposal became apparent. For the stretch in question, which runs all along Southsea Common, the seafront runs parallel to a wide, parking-lined boulevard which, on this sunny April day, was full of locals and visitors promenading. A large shingle beach runs almost the entire length, and was filled with Easter holiday activity. Portsmouth has very little green or open space, and the beach has become a vital place for the community. It is also a city – like many in the UK – blighted by post-war traffic engineers, who carved up its most scenic parts with major roads. Beyond the lines of parked cars nearest the beach, a significant amount of the low-lying common and marshland is filled with further car parks.

And yet, according to the council’s strategy of ‘holding the line’ via its concrete wall, one of the key aspects of its decisions is to maintain current roads and parking arrangements – even though any sea view will be lost.

The SSC proposal, in contrast, is a layered, soft-engineering strategy that increases the amount of public space, and maximises public enjoyment of the views and setting. The beach forms the first line of defence. Then a large dyke is formed behind it, offering additional ground drainage, with underground car parking helping to form the rear wall of the dyke. The dyke itself – Dutch style – would be a natural, landscaped mound that raises the level of the common (currently prone to swamping) and yet doesn’t deprive the houses, hotels and shops set back from it of their sea view. As Menteth says: ‘The opportunity to make this defensive structure a useful and enjoyable space and one that is less impacted by the traffic is phenomenal.’

As a military town, Portsmouth has many monuments to those who have sacrificed their lives in various battles. These are currently strung randomly along the route. Yet the council has insisted they must stay exactly where they are. Says Menteth: ‘When you look at the monuments, they’re all suffering from coastal erosion, and if you move them slightly further back you can…protect them. If you gather them in some sort of sequence you could make a monumental park that will reveal the narratives to all the visitors and people of Portsmouth.’

It is hard not to feel dispirited by this insistence on pursuing a scheme whose only outcome will be to blight Portsmouth’s economy and landscape. There is evidence of huge disinvestment already visible along the beachfront, including one collapsing wall and evidence of poor procurement in new metal railings, installed two years ago, that are already rusting.

The key difference in the SSC proposal, says Menteth, is that ‘this is a design solution, not an engineering solution. If you’re going to spend this money as an infrastructure investment, you don’t make it do one thing, you make it do 10 things.’ If only the right people were listening…