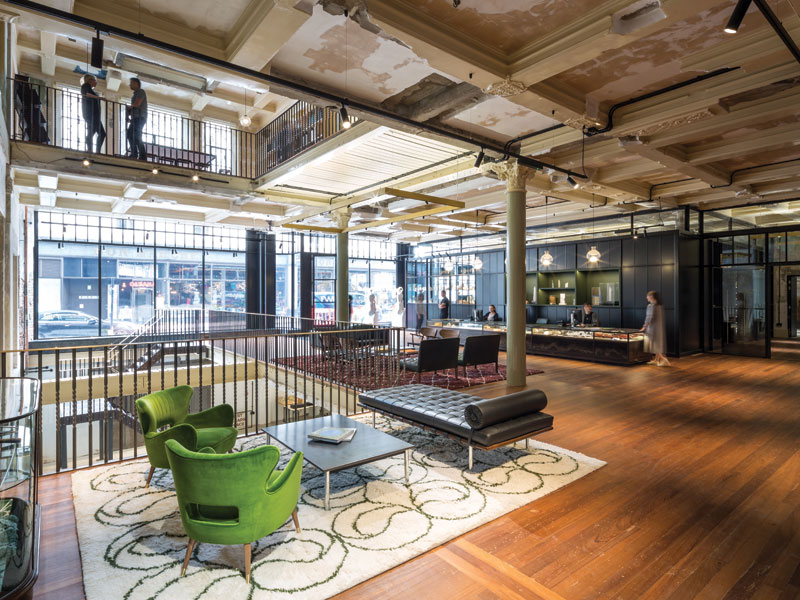 After 16 years at its King’s Cross location, London-based architecture practice Squire and Partners has moved its 220 staff south of the river to a new home in Brixton, called The Department Store. The practice bought a dilapidated Edwardian department store three years ago, formally known as Toplin House, which had formed part of the former Bon Marché department store. It had been a sort of a retail dream realised by local businessman James Smith who, in 1876 – inspired by the opulence of the original Parisian Bon Marché – brought a bit of it to Brixton.

Squire and Partners set about to bring some of it back into the building, which has become its new offices. It turned out to be striking a balance of glamour and edginess, reflecting the story of this particular building. Toplin House was built in 1906 to provide two additional floors of retail, with staff accommodation on the upper levels. It was this building that Squire and Partners purchased for its new London office in 2015. At the time the building was in a derelict condition, as well as forming part of a family of buildings along Ferndale Road, including a former horse-and-cart fire station. Bringing the building from dereliction to dream, the practice has entirely reimagined the Toplin House space, allowing the existing fabric and layers of history to inform the new design.

The design takes cues from its past, with the practice collaborating with craftspeople and furniture makers, but capturing the building’s evolving history, which at one time included being a squat. The interior scheme is not too precious and retains enough edge to make it truly Brixton; a building, the practice says, it was keen to give back to the area. Workspaces, including the model shop, are open to view from the street

‘We viewed the building and the project more as being a gift being given back to the neighbourhood,’ says Tim Gledstone, partner, Squire and Partners. ‘When speaking to local people, many don’t remember it; someone even said that they’ve walked past it for 35 years and had never noticed it before.’ Delivered is a hard-to-miss and hard-to-forget building, with a 21st-century appeal.

The exterior design sees years of neglect reversed, with added shop fronts and layers of paint removed to reveal original brickwork, stone, marble and terracotta. A cafe and record store occupy some of the newly created retail spaces at ground level with Crittall windows restored wherever possible, or replaced to match the original. Entering the practice’s fully glazed ground level reception space, and into the striking reception area, a theme of display and craft features. A 6.5m-long bespoke reception desk conceived as a haberdashery display was created in collaboration with specialist cabinet maker Interior iD and material artist Based Upon, and features a revolving display of works. The reception area is designed to stage changing installations throughout the year, the first being Marble Mannequins from Squire and Partners’ RIBA Shanghai Windows installation in Xintiandi for Maria Luisa in 2015. There are also visual links to the practice’s in-house model shop, from both the reception area and street level, so passers-by can view staff at work in this space from outside.

‘People of all ages stop and look at what’s going on in the model shop,’ says Gledstone. ‘At the King’s Cross location it was in the basement, closed off and with no windows. Now, it’s at the forefront with light and engagement from the local community. This is a semi-open building, and we wanted people to feel like they can walk in and be involved. We have no buzzer on the door for that reason.’

A new triple-height void creates connections between the first-floor workspace, reception area and a downstairs event space. Original Burmese teak flooring dating from 1906 was revealed and restored, complemented by two handmade rugs by Laguna up to 5m in length, which feature patterns designed by Brixton-based design outfit Eley Kishimoto following explorations into motifs found in the original building. The existing fabric of the interior was assessed in the early stages of the project, ensuring that elements such as original 111-year-old mahogany and teak parquet flooring, a grand, tiled, central staircase, a series of cast-iron radiators and a remarkable patina of colours, all documenting the building’s past, could be preserved. A series of voids were cut through the building to create dramatic volumes and provide vistas between levels. But while care was exercised in areas of renovation and restoration, some areas, particularly near the cut-out additions, have been left purposefully rough in appearance.

‘We had to make that decision, due to the building having been badly divided up for retail units, whether to reinstate architectural features that had been damaged or lost during transformation,’ says Gledstone. ‘Some beautiful elements have been revealed in near perfect condition, while others haven’t, or have been completely lost, and I love that we haven’t been too precious about the building in that respect. What we have is a design scheme, which captures a local story.’

The office floors, on the first, second and third floors, use a bespoke furniture system, developed in collaboration with south London joinery company Opus Magnum. Desking is purpose-made in birch-faced ply with an individual drawer and matt-black linoleum top. Above the desks on black steel frames, a series of high-level display boxes allow for personalisation and decoration. Storage includes systems designed to shield printers, plotters and binding equipment, with shelving units for display, books and magazines.

Lighting combines a unique version of the Flos Running Magnet system with a bespoke BTC range of fluted glass spheres used as floor, pendant and wall lights. Additional lighting in meeting and breakout spaces include an exclusive, limited-edition range of Louis Poulson floor and table lights.

Exposed services ensure that original ceilings and floors could be revealed. Black and copper power/data cables travel through the building in suspended nickel mesh trays. Each office floor has a tea point, expressed as a copper-lined box encased within a black ply storage wall.

Informal tables and seating at tea points and In a series of external terraces encourage interaction between staff. Each tea point also provides an entry point to a ‘secret stair’, designed to create a connection between the three office floors.

A new rooftop social space level was then added to create a fourth floor, as well as a crafted glass dome to replace a dilapidated cupola. The bar and restaurant area features a solid green-oak frame, crafted by specialist timber company Carpenter Oak to create a light, bright and airy space with views across Brixton. The bar was created in collaboration with Benchmark as a continuous run of untreated pewter with copper skirting, with staff and guests able to enjoy lunch, evening meals, drinks and parties in this space.

A gentrified building this is not: it’s a community hub for locals as well as artists, designers, craftspeople and the wider architecture and design community. ‘In terms of the local context it has been wonderful to revive a lost landmark and invigorate the street to create an interactive part of Brixton’s creative scene, which encompasses art and design, architecture, music, fashion and food,’ says Gledstone. ‘Having a curated series of uses and functions at The Department Store – including Post Office, shops, cafes and event spaces – has fostered meaningful connections across the community.

‘For the practice, The Department Store represents a confident expression of our true selves and a showcase for our commitment to craft, collaboration and creativity. While celebrating the narrative of the original building throughout its potted history, we have introduced a new chapter that acts as an evolving contemporary showcase of creation in motion.’ 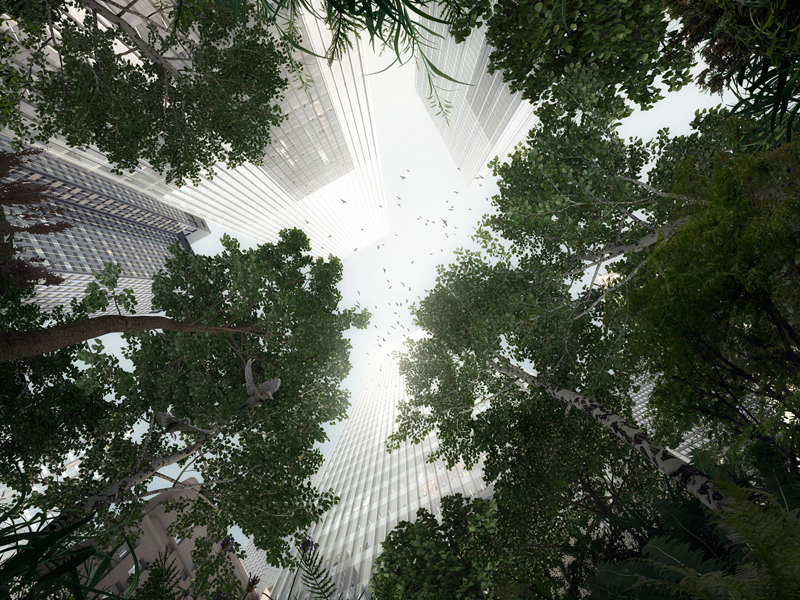