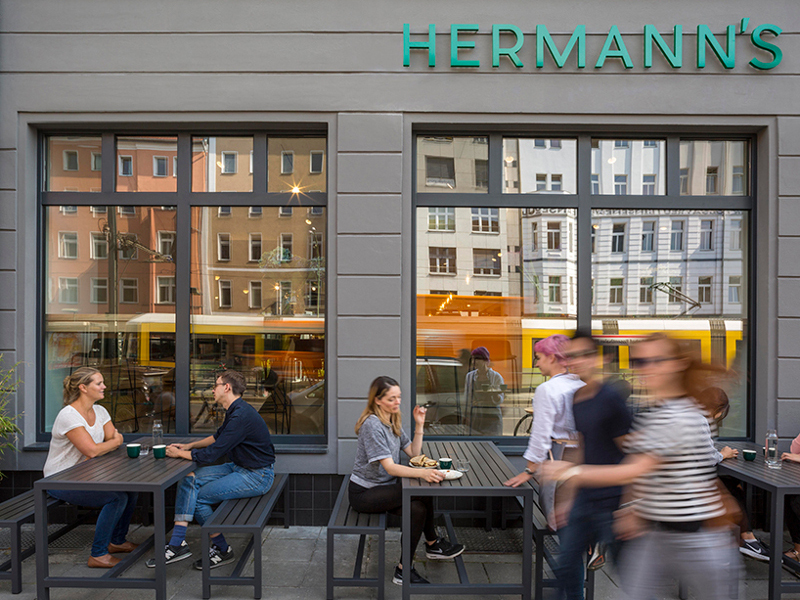 Freehaus designed and led the delivery of a new multi-functional co-working space centered around food innovation in the Mitte district of Berlin. How were you commissioned?:
Working alongside internationally renowned German food company Bahlsen (famous for their Leibniz-Keks biscuits), Freehaus played a key role in developing the strategic brief for this project which was borne out of an initial desire to revisit the ethos of invention and experimentation which has been at the heart of Bahlsen throughout its long and continuing history as a family business. We worked closely with the Hermann's team on all aspects of the project. How did the brief affect the materials and design choices?:
The initial design approach evolved from early explorations through Bahlsen’s extensive 125 year archive and through reflection on the spirit and intellectual curiosities of the organisation’s founder after whom Hermann’s is named. These eclectic interests, ranging from Egyptology and mathematics through to his nurturing of early twentieth century avant-garde artists, provided a key departure point for the initial proposals. How did your previous experience help you with this project?:
Freehaus has been working in the food and beverage sector since its inception, working with clients such as Ottolenghi and Jacob Kennedy on a variety of new restaurant concepts. Can you explain the layout of the project:
“Our design for Hermann’s has subtle references to Bahlsen’s historic headquarters in Hanover, where members of the public were invited to experience the factory floor first-hand amongst lavish displays of biscuits and cakes” says Jonathan Hagos, Freehaus Director. “A key aspect of the brief was to provide a space with similar yet contemporary opportunities for gastronomic demonstrations and interactions with the public and local food & produce communities.” The space is multifaceted, offering a range of artisanal coffee and cuisine to the public whilst acting as an independent venue for co-working, and flexible events. The design language of the interior is deliberately pared back to provide a backdrop to the activity of the individuals within, which is placed centre-stage. Through a combination of niche spaces, reconfigurable furniture and opportunities for display and demonstration, the space is intended to function as an environment for discussion, collaboration and innovation. What problems or challenges did you face?:
We actually set out initially to design a bakery which would serve as an R&D output for the Bahlsen group as a means of testing new ideas. What we identified together during the briefing process was that what was needed was something more sophisticated. The goal quickly developed to capture our client’s wider ambitions, such as how to address contemporary critical food issues, how to foster innovation and alternative ways of working around the subject of the future of food. And so the idea for the space grew into one that would provide a ‘safe space to play’ a place for people to meet, eat together, drink together and moreover innovate together. The major challenge of this project was responding to a brief which changed substantially over it's development. What do you feel were the most unusual design elements of the project?:
The centre piece of space is a 20 metre cast in-situ concrete counter that threads through the columns within the space. Its minimal aesthetic and form references the original conveyor belt machines of Bahlsen’s Hanover-based factory, which were the first of their kind in Germany. Freehaus also designed a 4.5m long communal table, that sits in the centre of the space. The table, made up of five separate tables in solid oak, powder coated steel and pre-patinated copper inlays each combine to form the HERMANN’S logo - a contemporary interpretation of the iconic ‘TET’ logo. With a carefully designed and integrated power supply, the table accommodates contemporary working practices with an ability to adapt to a range of functions including acting as an events reception desk, pop-up stall, meeting table and working bureau. How do you think this project is pushing design forward? What makes it special?:
Hermann's is a multi-functional space that is seeking to test the future of food. It is a co-working environment that offers a range of coffee and cuisine to the public, whilst acting as an independent venue for an ambitious events programme, a test kitchen, and film studio in one.