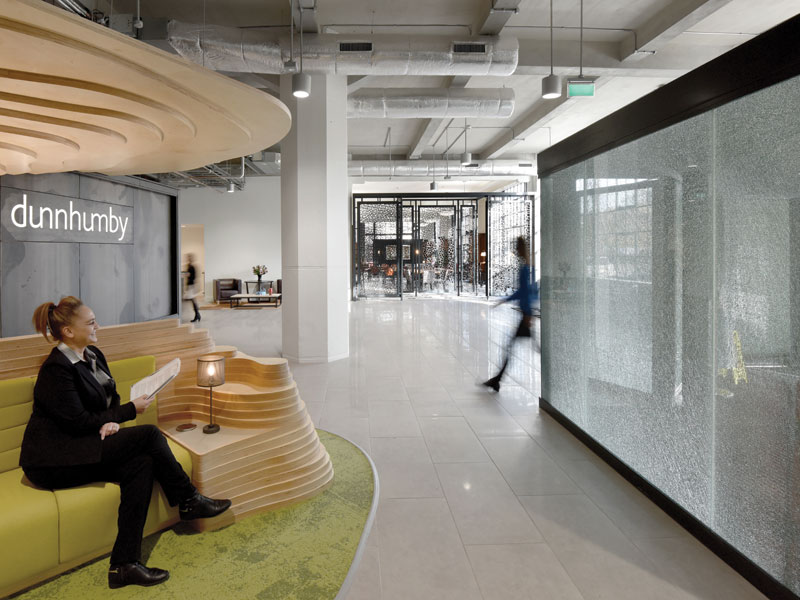 Once a Ford Motors factory and showroom, this landmark 1915 building has been transformed into a contemporary office, with references to the aesthetics of the past along with a striking new glass roof.

Former Ford Motors factory and showroom is the new HQ for customer science company dunnhumby, bringing together 1,250 staff to 184 Shepherds Bush Road. This Grade II listed building built in 1915 has been transformed by architecture practice ColladoCollins into a six-floor office space, with a striking roof dome as designed in collaboration with Seele and Hilson Moran.

The contemporary conversion sensitively maintains the building’s links to its past, such as with the maintained and restored original elements, including the high ceilings, wood panelling and feature mouldings. LOM architecture and design was tasked with delivering the interior spaces, while guided by Gensler’s corporate Playbook, as developed by Gensler’s Chicago office. LOM worked together with Gensler at concept stage, with LOM designing and delivering the project through to completion. Meeting and relaxation spaces are set inside the dome, with interiors by LOM

‘The new UK headquarters for dunnhumby needed to house staff from its two existing Ealing offices under one roof, enhancing collaboration...and satisfying growth projections for the next 15 years,’ says Simon Marett, director at LOM. Inside, a staircase creates a visual and social connection between the six floors, while themed work settings, café, conference facilities and gym also feature. The scheme responds to dunnhumby’s brief to encourage staff movement with no staff ‘wedded to a single workstation’, to celebrate the building’s heritage, and to provide a gym. General working space is located along the perimeter of the building, maximising the use of natural light and views offered by the extensive glazing of the building facades, and curved roof structure of the glass and steel dome addition. Cellular meeting spaces are placed around the central core; social hubs are near the staircases on each level and include informal seating areas. A homely aesthetic is in evidence

‘Franklin Design was appointed towards the end of the project to contribute to the design of a limited number of specific bespoke elements,’ explains Marett. One was a perforated screen, as seen in the ground-floor dining area. This space features a minimal palette of materials and colour, yet its careful restoration and modernisation gives a hotel restaurant feel rather than a work canteen.

‘[Franklin Design also assisted with] the reception desk and the “climbing wall” feature, on the rear face of the central core, as well as assisting in sourcing the furniture for themed areas,’ adds Marett. Looking around the interior space, it has a more homey feel than an office, with a design theme centered on wellbeing and longevity. Instrumental to this aim is the gym, put on the ground floor, which has been designed to let natural light into the gym space and reflects the architectural character of the building. The space includes two treatment rooms, with support therapists offering services ranging from reflexology to osteopathy. Changing rooms and showers support the gym and benefit those who cycle to work, while 100 cycling racks in a purpose-made cycle shelter are located to the rear of the building.

The building was taken over by Citroen in the Twenties, and requisitioned during the Second World War as a depot for the RAF. ‘The design celebrates the building’s history and is a flexible workplace that supports collaboration, creativity and productivity’, says Marett.