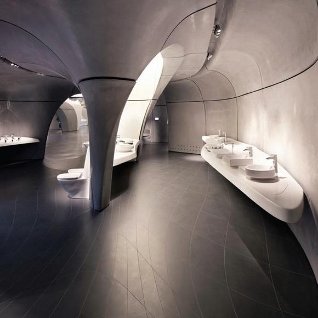 Designed by Stirling Prize-winning architect Zaha Hadid, the latest showroom for Roca is an organically shaped and Fluid space that reflects her signature style while providing an iconic backdrop for Roca products

It’s easy to see why Spanish bathroom brand Roca chose Zaha Hadid Architects to design its newest showroom, its ‘London gallery’. Hadid is well known for the influence of natural forms on her architecture – so who better to capture the nature of water, an element that’s intrinsic to Roca products? And let’s not forget the considerable kudos of having one of architecture’s brightest stars as the designer of your showroom.

It’s been a long time coming – Hadid was commissioned to design the showroom at Chelsea Harbour in London in 2009. But for Roca it’s been worth the wait. This is, after all, only the Sterling Prize-winning architect’s third completed (permanent) project in England.

Roca takes design seriously, and not just of its products. The company runs an annual competition called Jump the Gap, for which it invites young designers and architects to come up with innovative bathroom products. It also has three other ‘gallery’ showrooms – in Lisbon, Madrid and its home-town Barcelona – each of which has been designed by an internationally renowned architect or interior designer.

According to Roca, ‘The concept defining each of the Roca Galleries is to take the visitor far beyond simply researching and choosing products’. It hopes to give prospective customers – architects and interior designers – a real insight into the Roca brand with a designer interior underpinned by interactive technology such as touch-screen consoles, which are placed around the London showroom.

You don’t commission Hadid if you want something understated, and true to form the architect has delivered a bold, sculptural interior that looks like a cross between something natural – a cave carved out by a glacier, perhaps – and something decidedly man-made, futuristic even, like a spaceship.

From the dramatic rippling facade whose windows and doors are shaped like the mouths of caves, to the curving walls and undulating plastic benches, everything in the showroom references water. A central core – an almost completely white corridor of undulating gypsum-panelled walls – snakes through the space. On the ceiling, bulbous plastic light fittings resemble individual drops of water.

As Hadid puts it: ‘Our work imbues architecture with the intricacy and beauty of natural forms. Using a formal language derived from the movement of water, the Roca London Gallery has been eroded and polished by fluidity, generating a sequence of dynamic spaces carved from this fascinating interplay between architecture and nature.’

The gallery is actually just a single room, but Hadid has created sense of intrigue by placing several semi-enclosed areas, such as display spaces with concrete walls and integrated shelves and a glazed meeting room, around the its central corridor. As you move through the space more of these semi-enclosed alcoves reveal themselves while others recede out of view. You might think this would make the space feel smaller, but in reality the opposite is true.

There is very little in the way of off-the-shelf furniture here. A desk and chairs by Vitra in the glass-fronted meeting room are the only pieces not designed by Hadid’s practice. Any more would surely have detracted from the organic effect of the space as a whole, whose bespoke furniture looks as if it may have grown from the walls, ceiling and floor.

The space is unmistakably the work of Hadid or someone hugely influenced by her work, and the products on display – sinks, showers, taps, WCs – could have been overpowered by her signature style. But according to Roca, one of the great successes of this project is the almost symbiotic relationship between the products on display and the architecture surrounding them. ‘Zaha Hadid Architects has created a precisely ordered, intimate and enjoyable sensory design environment which stimulates the visitor through its active and engaged relationship with Roca’s products,’ says Miguel Angel Munar, a senior managing director at Roca.

Like the other galleries in Spain and Portugal, the Roca London Gallery is intended to function as much more than just showroom for the company’s sanitaryware. Aimed at everyone from design-savvy architects to design-thirsty students it will, says Roca, become a ‘London hub hosting a wide range of activities such as exhibitions, produced in-house and externally, meetings, presentations, seminars and debates, the criteria being a celebration of design in keeping with the Roca brand and company values.’ With Hadid’s name attached, it’s already making waves.

This article was first published in fx Magazine.