For the Mextropoli 2017 Architecture Festival, the painter’s bucket - a common sight on the streets of Mexico City - was used to create an interactive installation referencing the use of the city’s public space by the ‘viene viene’ men

A design team of international architects and structural engineers have collaborated to draw attention to the value of public space in Mexico City and beyond. The four-day installation in March, called One Bucket at a Time, as part of Mextrópoli 2017 in Mexico City, was inspired by the hijacking of public space in the shape of car parking spaces and used common painter’s buckets as the building blocks for an interactive pavilion.

In Mexico City’s metropolitan area, with a population of more than 23 million people, 4.5 million daily commuters navigate complex road networks, facing traffic jams, public protests and parking shortages. The street – the prime public space – is the setting for all such friction, but an unorthodox parking solution is often to hand for those pushed to find a space. Men known as ‘viene viene’ claim a stretch of the street and charge hopeful drivers, looking for a parking spot, a fee in exchange for access to their pitch. Each viene viene man can control one or several city blocks, blocking the spaces off with buckets, a common sight on the streets. Canadian architecture practice 5468796 Architecture teamed up with Mexico-based practice Factor Eficiencia and American structural engineer Studio NYL to deliver the bucket-inspired pavilion, in the city’s Parque Central de la Alameda. Each bucket is connected with rope to form a grid, creating a giant carpet-like surface, which the public was invited to freely explore.

‘Once the installation was built the public’s interest and engagement with it only grew – an extremely rewarding aspect of the project,’ says Pablo Batista of 5468796 Architecture.

‘From the beginning we wanted to respond to the brief through a simple approach that could take a quotidian object and use it to create a social reaction through the installation...people from all walks of life were able to grasp the concept of the bucket and its transformation into a pavilion structure.’

The surface of the pavilion adopted similar qualities to a conventional carpet in that it could be rolled, pulled up to a point or along a line, taking on different forms. People sat, ran, played, and climbed on it, all participating in the act of claiming the public realm. Bird’s-eye view of the installation, in the city’s Parque Central de la Alameda

In place for four days, the installation was dismantled gradually, with buckets released from the rope grid and symbolically absorbed by the city. Through the use of the buckets, symbolising the holding of public space as hostage, the pavilion design highlighted and questioned this pervasive condition while also empowering people of Mexico City to reclaim ownership of their public space.

‘Such an open brief, combined with a prominent site in Mexico City’s Parque Central de la Alameda, was defined by the intention to create something that would be thought provoking and visually striking,’ says Batista.

‘As a design team, we searched for inspiration in an everyday object that would produce a reaction in the public, while providing an engaging and exciting pavilion.’ 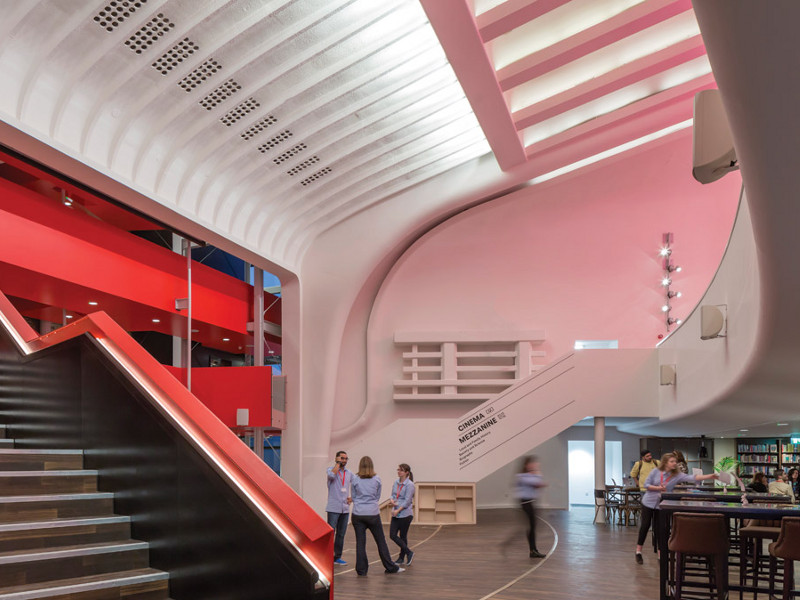