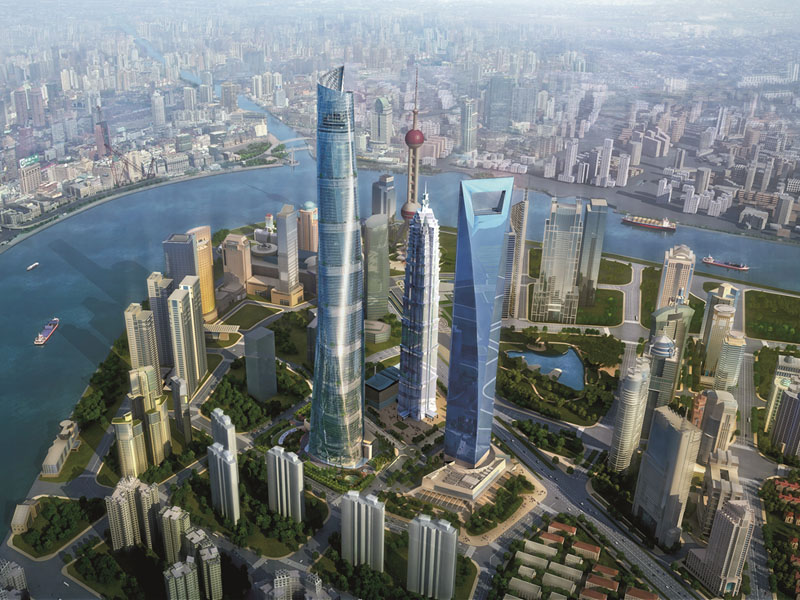 With architects and developers reaching further and further into the sky, the world's current tallest building, the Burj Khalifa, will soon be surpassed. Here's our list of the word's 10 tallest buildings, both complete and under construction.

Designed to reach a full kilometre into the sky above Jeddah in Saudi Arabia, this monser skyscraper, designed by Smith+Gill Architecture occupies a construction area of 530,000 square meters and is expected to cost $1.2 billion. The architects describe the design as 'both highly technological and distinctly organic. With its slender, subtly asymmetrical massing, the tower evokes a bundle of leaves shooting up from the ground -- a burst of new life that heralds more growth all around it.'

With an estimated construction time of just 210 days, Sky City in Changsha in China's Hunan province must take the record for being the world's fastest skyscraper if not quite the tallest.

The key to its speedy construction is that each section will be prefabricated and then fitted together on site. Broad Group expects the building to be complete in 2014.

Occupying the top-spot as the world's tallest building since it was completed in 2010, Dubai's Burj Khalifa (formerly known as the Burj Dubai) stands at 828 metres (2,716.5 feet) with 162 floors and the highest open air viewing platform in the world. Likened to 'a shimmering silver needle' by the New Yorker magazine, the design, by Skidmore, Owings and Merrill, cleverly manipulates air flow to reduce stress and movement cause by high altitude winds.

Designed by American architectural firm Kohn Pedersen Fox Associates, this super-tall skyscraper in Shenzen for the Ping An Insurance Company will contain more than 100 office floors and a large podium containing retail and conference centre. Due for completion in 2016, The tower's four principle façades will be sheathed in chevron-shaped stone verticals which will extend from the building's base. These stone verticals will house perimeter columns and be stitched together at the tower's four corners by eight-storey diagonal braces.

One of four Chinese Skyscrapers on our list, this is also the second one to be designed by Adrian Smith and Gordon Gill of Smith+Gill Architecture (Smith also helped design the Burj Khalifa when he was at Skidmore, Owings and Merrill). The 125-storey skyscraper, due for completion in 2017, will stand at 636m when it tops out. With three corners rising from a tripod-shaped base and tapering upward to culminate culminating in an arched tip above a dome at the top, the tower is designed to reduce wind resistance and the vortex action that builds up around super-tall structures. the corners will be of smooth curved glass, contrasting markedly with the more textured curtain wall cladding the body of the tower.

Currently china's tallest building, this skyscraper designed by Gensler is set to be the second tallest in the world when it is completed in 2014.

The structure will tower some 630m over Shanghai's financial district making it a potent symbol of China's economic ascent. However, the building got off to a bit of a shaky start when cracks appeared in the ground close to construction.

The architects have since given assurances that these initial problems 'will not affect the security of the architecture'.

Towering over the Al-Masjid Al-Haram (the grand Mosque at the Muslim holy city of Mecca), this building, competed in 2012, boasts the world's largest clock face. It is also the world's largest hotel, built accommodate 65,000 people, most of them in town for the Hajj. The building's design hasn't been to everyone's taste, though, and it caused controversy because an 18th century Ottoman citadel was demolished to make way for it.

This 117-storey tower will become the tallest building in the city upon completion, soaring to 600m.

The upper portion will house a luxurious hotel and the lower portion will contain office space. The design is described as resembling a walking stick topped with a sparkling diamond atrium.

Designed by Kohn Pedersen Fox Associates for the Lotte Moolsan Group, this tower of glass and steel tower will taper to a height of 555 metres when it's complete, which they developers expect to happen in 2016. When finished it will contain nine floors of retail space, offices office space and a seven-star luxury hotel.

Conceived as a defiant repose to the terrorist attacks that destroyed the original twin towers of the world Trade Centre, One World Trade Centre will be the tallest building in the western hemisphere, when it is completed in 2014. Designed by Skidmore, Owings, and Merrill to fit into a master-plan by Daniel Libeskind, the tower resembles eight interlinking isosceles triangles with a spire rising from the top. It will contain retail and office space, a luxury hotel and possibly even a museum.