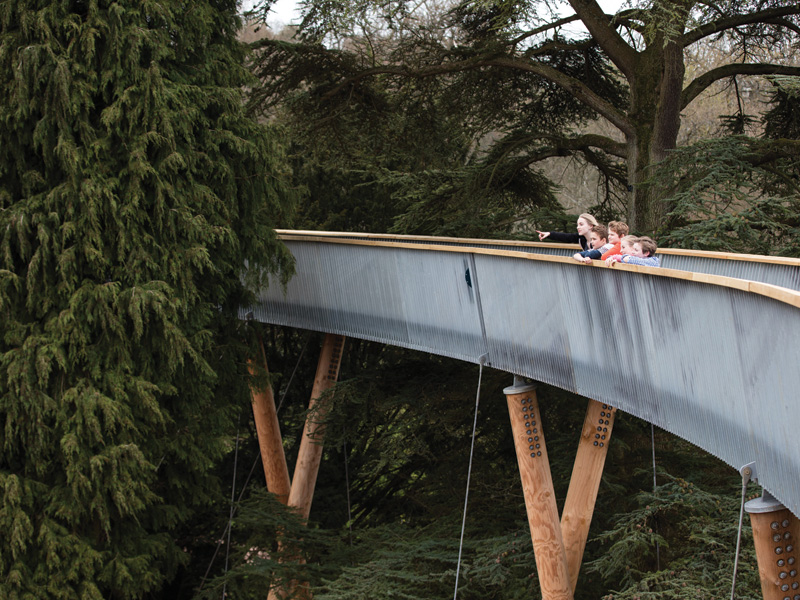 We go to the country for a breath of fresh air and to see what magic design and architecture is weaving to enhance the view.

Wild nature has never been so fashionable – not, perhaps, for more than a century, since art critic and philanthropist John Ruskin exhorted his contemporaneous Victorian artists and art lovers to honour the power of rocks, plants, birds and wild landscapes, lest they forget the importance of ‘truth to nature’.

When the head of the Guggenheim Foundation, Richard Armstrong, declared to me in a 2014 interview that he was tempted to prioritise building a cabin in the woods above Bilbao as the next global Guggenheim destination, rather than press on with plans for the Guggenheim Helsinki, it sent a very clear message about the growing need – even on the part of the privileged cultural cognoscenti – to find respite from the pressures of city life in the quiet contemplation of Mother Earth and her riches. Armstrong was clearly struck by the idea of drawing people to a place of outstanding beauty, to live simply, connect with nature and enjoy a seasonally attuned, slow art, slow food immersion.

Three years ago I was inspired to investigate an emerging lust for immersion in wild and heritage landscapes for FX. But the feeling then was that this call of the wild was largely in response to the pressures of urbanisation – as more and more people crammed themselves into our cities, we were being drawn to reappraise and appreciate the spaces and places that lay beyond them. At that point, the most interesting architectural schemes were dynamic spaces aimed at creating destinations within these landscapes through dramatic and tactile structures, such as the sleek wooden contours of Snøhetta’s Tverrfjelhytta Reindeer Pavilion in Norway, and the rough, sculptural stone edifice of Heneghan Peng’s Giant’s Causeway Visitor Centre, in Ireland. In the short intervening time, that social and cultural shift has been intensified by the increasing penetration of digital information and interaction into every aspect of our lives.

Barely a day goes by without another article cropping up in the media bemoaning the loss of peoples’ real-time, three-dimensional connection with friends, family and our physical localities caused by that fourth dimension, which links us with the endless possibilities of new virtual, social and cultural connections.

As Will Self noted in a recent article in The Guardian: ‘Four-dimensionality seems to queer our flesh-and-blood existence…[so that]…the friend who continually updates their online profiles can seem oddly insubstantial in person’; [or] fleeting, real-life encounters can ‘turn into a persistent virtual presence, hovering around our twittering timelines.’

As Google, the White House, corporations and even a growing roster of UK schools sign employees and pupils up for courses in mindfulness (an abbreviated version of the Buddhist meditation practices, designed to encourage living in the present), an epidemic of articles has made us ever-more anxious about the impact of endless multi-tasking, multiscreen activities on our memories and attention spans. Children’s health specialists agonise over the six or seven hours a day that youngsters aged between five and 16 now spend on screens (often in school time). There’s also a growing body of research that links our teens’ virtual socialising and its inevitable accessory – constant self-evaluation – with the rise of youthful anxiety and depression. Mindfulness books and courses are one of the hottest trends in publishing and the ‘self-improvement’ industry; digital detox holidays are the biggest new luxury-break niche; and allotment-grown vegetables and home-fermented or foraged foods have become the discerning foodies’ favourites. But all of this is – probably – too little, too late: in a recent MIT publication The Rediscovery of the Wild, psychiatrist Ian McCallum says: ‘The human psyche is alive with tokens of the wild. And yes, I think we have been negligent. We dropped these tokens. We have gradually but progressively lost track of our animal nature and what wildness really means.’

So, congratulations to all those custodians of the still wild and spectacular parts of our planet for seizing this moment and commissioning impressive new buildings to draw us frazzled city-folk away from the temptations of smartphones and bingewatching boxsets on iPlayer and Netflix.

Stylistically, the design aesthetic has shifted: the latest wilderness structures seem to have moved away from being overtly iconic. If they are statement buildings, they whisper, rather than scream. The most inspirational of these borrow heavily from the landscape – literally – such as Feilden Fowles’ forthcoming structure for the Yorkshire Sculpture Park that greets the visitor with a large, rammed-earth edifice whose raw materials have been taken from the surrounding site. Feilden Fowles’ design approach was ‘more inspired by land art’, says Edmund Fowles – especially by Robert Morris, Michael Heizer and Andy Goldsworthy, the latter with several pieces in the YSP. ‘The site is a former quarry, now a faint depression in the land. This led us to develop a building very much as landscape, working with topography, boundaries and thresholds, rather than as an object or figure set within the landscape. It serves as a gateway building.’

The rammed earth elevation has a functional as well as aesthetic purpose, says Fowles. ‘We are tying it back into the landscape, and…creating a wall that protects from the motorway and the prevailing conditions. Then, facing towards the sculpture park, a subtly curving elevation wraps into the existing quarry face, a continuation of the land contour and further embedding the building in its landscape,’ he says.

The practice, set up in 2009, was named Young Architect of the Year 2016 by Building Design magazine, and has specialised in subtle buildings whose form and materials complement and embrace their environment. Model of Peter Zumthor’s proposed secular retreat, the next Living Architecture commission, and to be built in the rolling hills of Devon’s South Hams

Says Fergus Feilden: ‘We think there’s a real appetite for buildings that have a provenance and that are more materially engaging and more tactile – buildings that change through time and seasons. Certainly, we find that people are being drawn to our work because of that.’ Feilden senses a growing desire for buildings that will have some longevity in heritage settings – no matter how eyecatching, structures that lean on the industrial aesthetic can end up looking sterile when the fickle wheel of fashion shifts.

A renewed appreciation of craftsmanship is also creeping up. And the practice embraces the idea of working in dialogue with the craftspeople who help to construct their spaces.

This may even, with the YSP building, become educational. ‘When the rammed earth is being constructed, there might be workshops, such as an open day giving people the opportunity to take part in the process,’ says Fowles.

There’s certainly room for innovation – and engineering technology has made possible one of the most spectacular and ‘light’ structures for the appreciation of nature: Glenn Howells’ Walkway in Westonbirt Arboretum. But here too technology has been deployed in the interest of making sure the structure rests lightly on the land. Ever on trend, Living Architecture – an organisation established by philosopher Alain de Boton to promote modern architecture, through offering up a series of architecturally cutting-edge holiday homes – is delivering a double whammy of wild living with its current and next launch. The Life House is John Pawson’s take on a super-stylish retreat. Black Danish handmade bricks on the outside, white on the inside, and not a flash of colour to detract from the stunning Welsh landscape around you, this dwelling is all about peace and tranquility. Next up, in 2017, will be a monumental but monastic structure, the Secular Retreat, from Swiss architect Peter Zumthor, set within the rolling hills of the high-end, second-home haven of Devon’s South Hams.

It claims to be ‘a work of art to touch the soul’. But only the souls of the well-heeled will be saved – Pawson’s The Life House, for example, starts at £3,200 for a week (and sleeps six). Thank heavens nearly every other project on these pages is well within the reach of even the humblest civilian pocket. Wildness is something we can – and should – all benefit from.