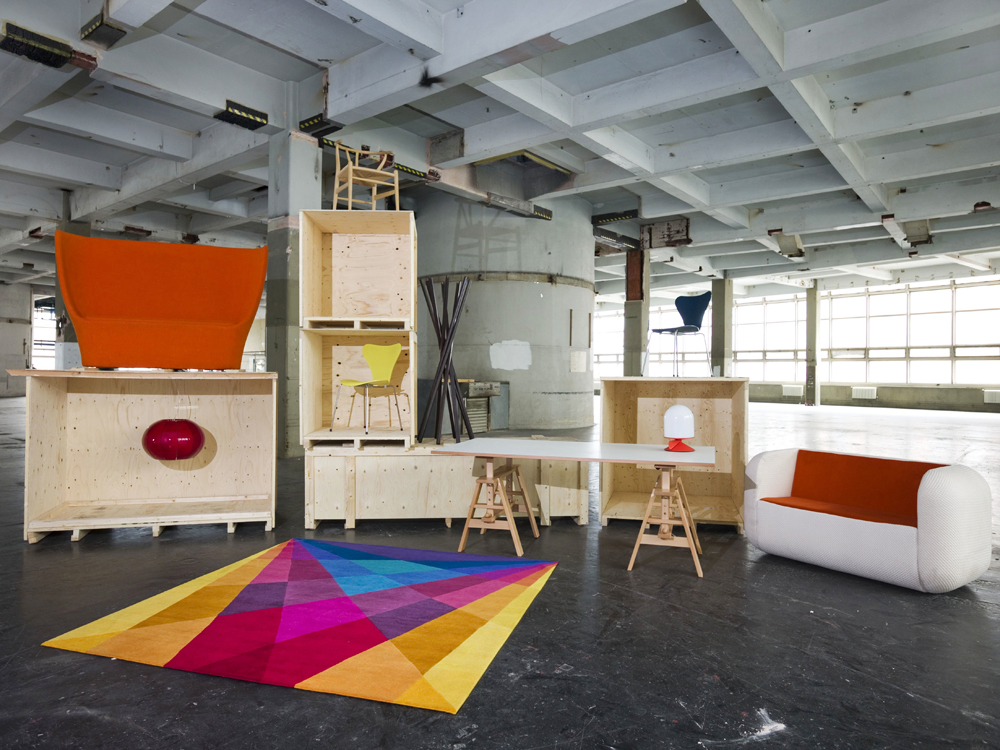 The 11th year of the London Design Festival sees over 300 events flood the capital, from trade fairs and high-profile landmark projects, to small exhibitions, local open studios and workshops.

Split into five design districts, this year the Festival adds the Chelsea and Clerkenwell Design Quarters to those of Brompton Design District, Fitzrovia Now, and Shoreditch Design Triangle. The Southbank Centre is brought into the mix as a new Design Destination, as is Focus/13 at Chelsea Harbour Design Centre.

DesignCurial presents the pick of the Festival, from the prehistoric to the futuristic, from texture to taste.

It's easy to feel overwhelmed by 100% Design, the leviathan trade show of the London Design Festival, where hundreds of contemporary designers present a huge range of products, from furniture and lighting to appliance fittings and accessories.

This year, the regular sections on Interiors, Office, Kitchen & Bathrooms and Eco Design & Build are extended by an area dedicated to international pavilions and a platform for emerging brands. Appropriate to the Festival's oldest and most established trade fair, 100% Design's impressive Talks programme and hub sessions draw appearances from leading figures in the design world.

As the central hub location for The London Design Festival, the V&A Museum plays host to a series of installations, events, talks and workshops. Highlights include God is in the Details - items from the collection chosen by influential designers to be viewed through Swarovski specialist lenses, Scholten & Baijing's 'The Dinner Party' - an abandoned stage set of contemporary tableware set within French-style paneled interiors, the multiplying pages of the Moleskine Sketch Relay, and the results of a competition to design a new chair for the Bodleian Libraries in Oxford, to name but a few.

Blessed by perhaps the best industrial interior space in London - the former Royal Mail Sorting Office on New Oxford Street - designjunction emphasises the international, featuring over 150 brands from across the world. With a varied seminar programme curated by design critic Aidan Walker and an array of eateries including Jamie Oliver's Barbecoa and the omnipresent SodaStream, designjunction is a world on three floors. The programme is expanded by the development of lightjunction, a section on high-end decorative lighting, while more gimmicky additions such as the interactive Flash Factories and tokyobike's design cycle tours around London promise to refresh lagging attention spans.

Clerkenwell furniture and lighting showroom Viaduct hosts an exhibition of designs by Muller Van Severen. In 2011, visual artists Fien Muller and Hannes Van Severen decided to combine their two disciplines of photography and sculpture to create a design process that would maximise materials while maintaining minimal form. A mixture of linear framing devices and colourful, characteristic infills, their designs outline the essence of the material.

The London Design Festival will see the launch of a new collaboration between Danish design brand HAY and London-based designer Sebastian Wrong. Drawing from HAY's dedication to affordable innovation, Wrong acts as creative director and curator for a range of lighting, ceramics, textiles, glassware and furniture, by designers including Alexander Taylor, Stefan Diez and Bernhard Wilhelm. Located in Georgian grandeur of the former St Stephen's Club, don't miss the opportunity to dine in the magnificent terrace overlooking by St James's Park, with a menu by the creators of the Peckam Refreshment Rooms.

Newly appropriated as a Design Destination for the Festival, the Southbank Centre hosts LDF regular Designersblock - a showcase of the work of talented young designers, while the International Design Pavilions present the work of the most cutting-edge international designers, including radical talent from Mexico and India. In the Royal Festival Hall, a permanent exhibition curated by Wayne and Geraldine Hemingway explores the icons of the 1951 Festival of Britain, while a simultaneous exhibition investigates the role of science and technology as 'designtists' and 'futurologists' push the boundaries of experimental design. Save time for the short walk along the river to the Tate Modern to climb the Escher-inspired Endless Stair - an LDF Landmark Project designed by Alex de Rijke, Co-Founder of dRMM Architects. Consisting of 15 interlocking timber staircases, a climb to the top provides panoramic views along the Thames.

The Paris fashion designer applies his dark and minimalist aesthetic to furniture design with a focus on monumental immutability and megalithic forms. Using rare and luxurious materials, from 500,000 year old fossilised wood to translucent alabaster, the designs reconcile light and darkness through nuanced form and material. Prominent pieces in the collection include the ceremonial chair Curial, the Trident chair and the Roman Daybed, with re-interpretations of archetypal forms such as the Plug Table.

Food and Art Through the Ages: Talk/Seminar, 4-5pm, 16 September

Food historian and director of AVM Curiosities, Tasha Marks, presents Food and Art Through the Ages, an entertaining survey of food through time, from the decadent delights of the ancients to 3D printed desserts and other technological inventions redefining modern taste.

If your indigestion has settled by the following day, you might want try Playing With Your Food, an interactive masterclass exploring food as an artistic medium - Tasha Marks unlocks the ludic secrets of gastronomic design. Not a fish-finger in sight.