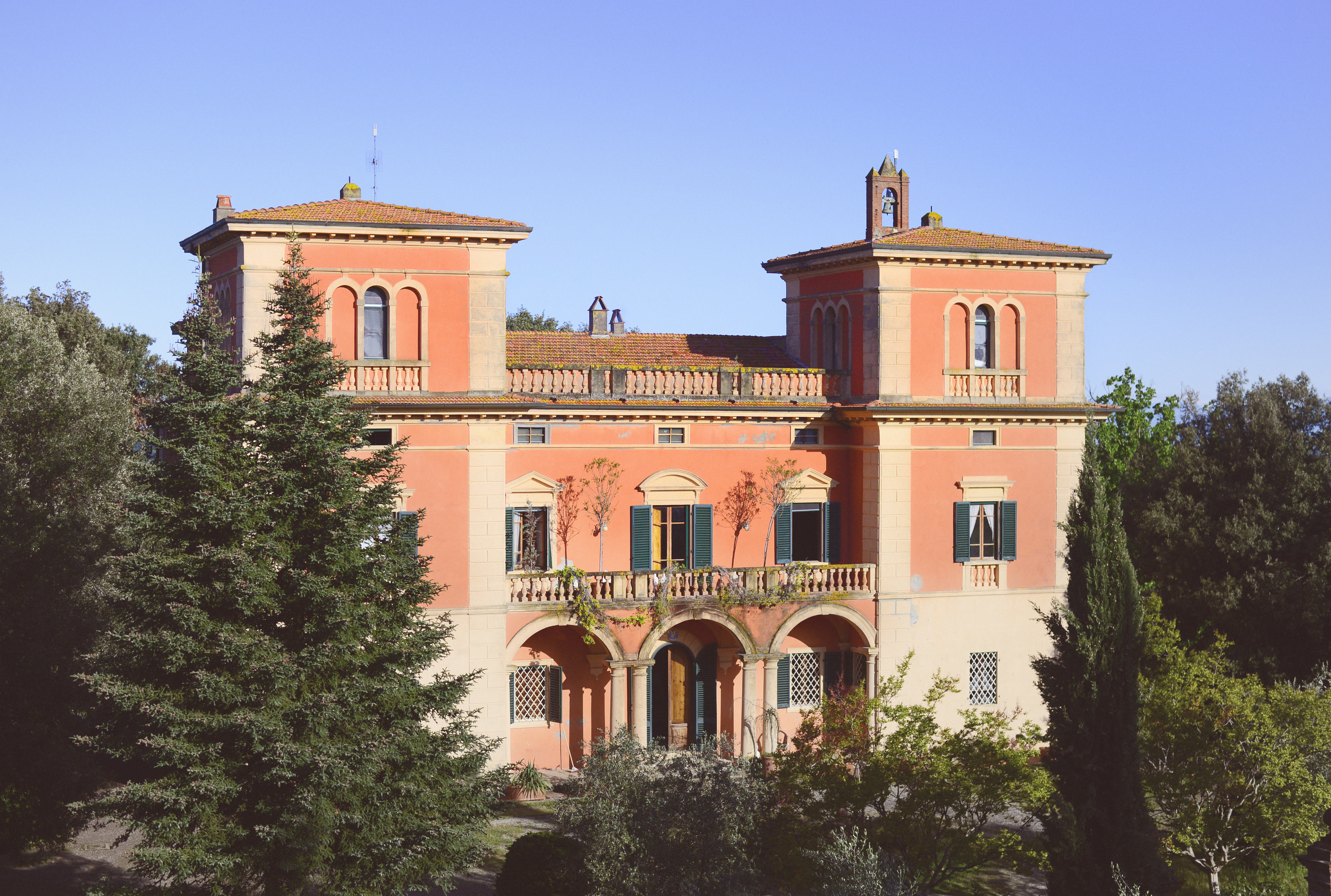 Ahead of the opening of the Villa Lena’s season for 2018, we sat down with co-founder, Lena Evastafieva, to hear more about what to expect from the artist retreat that’s nestled in the heart of Tuscany.

Set in 500 hectares of glorious Tuscan countryside, including woodlands, olive groves and vineyards, Villa Lena is a popular artist retreat offering a unique creative community. Their season, which runs from April to October, is about to begin for 2018; as of April 19th, the Villa Lena will be opening the doors to its first 8 occupants, out of 56 new multi-disciplinary artists that will be in residency this year.

As the weather gets warmer, Villa Lena prepares to welcome its first guests and artists of the season. To discover more about this one-of-a-kind hotel, and find out what we can look forward to in 2018, we spoke to one of the Villa’s founders, Lena Evastafieva. The first question that springs to mind is, where did the idea for such a unique concept come from? Lena explains that her family were the owners of the Tuscan estate before it became Villa Lena. “[The estate] was moving towards a state of disrepair because nothing really was happening there,” she says. “It was very difficult for them to manage because they were not in the country, so I kind of suggested that we get involved - without really understanding how much work it was going to be – and this is how we took over”. With both the logistics and legality to contend with, there was a lot for Lena and her husband, Jerome Hadey, to figure out. Luckily, they had good friend and successful entrepreneur Lionel Bensenoun on board as a fellow co-founder to help. “We didn’t know the processes and procedures of how to set it up, but it was a blessing in the way; we managed to create something that was very different to a typical hospitality project,” Lena explains. “My background is in contemporary art and my husband’s is in music, so we wanted to bring that aspect with us – that’s how the artists residencies came about”.

“It’s been showing a really positive dynamic,” continues Lena, discussing the fact that after their soft opening in 2018, Villa Lena has continued to grow. “Word of mouth was really powerful for us - which I think testifies to people being interested in, and liking, our product. We were really lucky that the press interest was quite high [because] we didn’t do much advertising”.

As the Villa is situated on an ancient estate, the buildings and surrounding woodlands often require maintenance. “There’s always something to renovate and construct,” says Lena. “Every time we close, we renovate something, so each year it actually becomes better. It’s a constant evolution and I think that’s what makes people want to come back – is that we’re never actually the same.”

Another reason visitors return to the Villa Lena could be the unique hotel’s ethos of openness and community. “People who come feel really comfortable at our place,” Lena says with a smile. “We have incredible nature surrounding us, and we want people to connect with nature – whether that is through the cooking workshops or with the residents over dinner. We have artist debate dinners once a week; we create different points of interaction, a few things which testify to the great atmosphere”.

The best thing about these interactions, Lena says, is that “the crowd is so varied. The artists are one thing, but we also attract really different clients – from average income to high spenders. It allows us to have a great cross section of people.” In contrast to Villa Lena’s range of holiday makers, Lena gives an example of a hotel she stayed in in Porto Ercole, Il Pelicano. “It was beautiful,” she mentions, “but the crowd there was all the same because only certain people could afford it”.

One of the other major elements that keeps Villa Lena so diverse is the resident artists. “They are such a different cross section of people; they come from different places, and they’re at different stages of their careers,” Lena begins. “We’ve been really lucky to get some established artists - they just apply, which is great – and we obviously get a lot of young artist applications. We always try to mix up each slot with established and aspiring artists”.

“From our experience, the aspiring artists benefit a lot from the established ones, but actually the established ones really benefit from the younger crowd too”. So, with 56 new residents this year, is 2018 the biggest season yet? Lena ponders the question for a moment. “I guess this is the biggest year so far,” she muses, “because it took us some time to figure out what the perfect length of residency [is]”.

Lena explains that for the first few years, the Villa Lena offered residencies of two months – and this then changed to giving the artist the option of one-to-two months; “I think now we agree that, actually, one month is the most efficient way [forwards],” says Lena. “[Artists] come, and they feel like they only have one month - so they really make the most of it. They work in the studio, or they interact with each other; when there [were] two month [residencies], they would take day trips or two day trips away, and the dynamic wasn’t the same”.

After all, as Lena mentions, “the primary goal for the residency program [is for] it to support the artists. It is there for them to evolve creatively” – and so artists in residence spend a lot of their time working in their own projects. However, as part of their time at the Villa, artists can lead workshops and talks for their fellow residents and for the holiday makers staying in the hotel.

“We want people to interact with each other – we never wanted it to be just residency, and we never wanted it to be just hotel,” Lena says, before explaining the various workshops available. “We have workshops that are constantly available like our cooking workshops… That is constant but the [chefs] who [lead] it will change,” she lists. “Then we have other things like the artist aperitivo, which [is a constant workshop] but the group will change, and then we have one-off artist talks with those who are in residence”.

When it comes to asking the artists to take part in the workshops, Lena says it’s all down to the individual. “Sometimes we look at [an artist’s] application and think, ‘this is going to be a great creative contributor’; so we talk to them about doing workshops two or times a week for the clients, and we have a separate deal with them. Some artists – like conceptual artists – we would just ask to do a talk once in their stay”. But it’s not only the artists leading workshops and talks that have an impact on Villa Lena. Ex-residents often return – either for their own holidays, or to help with the Villa’s constant evolution. “I usually think, ‘we need to get a design for this, or we need to get photography for that; who can I ask?’ I usually go back to our ex-residents,” says Lena proudly. “I ask them if they would be willing to do something for us”.

“We have an ex-resident designing the main pool,” she reveals. “I asked another ex-resident to landscape and design our medieval park. I asked another to design the look and label for our new sparkling rose. It’s on-going. Of course, I pay them for their work - but it’s also important because they know the place, they’ve been there, felt the vibe and atmosphere; they know the look. Although it’s very distinct in [the artist’s] aesthetic, it’s consistent with what we are… the shared experience of the space makes it coherent”.

With only weeks left until the first eight artists arrive for their residencies at the Villa, what is Lena looking forward to from the 2018 season? Firstly, it’s the Villa Lena’s new sparkling rosé – “we trial tested it last season and that was a great success,” she mentions, explaining that the wine is produced locally. Lena is also looking forward to meeting all the artists, but there are a few stand-out artists worth mentioning.

“We have great musician, Lewis Hakeem, coming in July,” she says. “We have a really exceptional artist, Mai-Thu Perret [arriving in May]; she is a rising star in the contemporary art scene. We also have [Tulsi Badrinath,] an Indian writer who is also a meditation dancer [arriving in June]. Super excited about her! It’s a really broad spectrum - I’m excited about everybody, they’re all so different”.

The Villa Lena’s programme of events will begin when the first residents arrive, on the 19th of April. For more information on the Villa, the artist residency, or to book a holiday at this magnificent, creative hotel, please visit their website here.