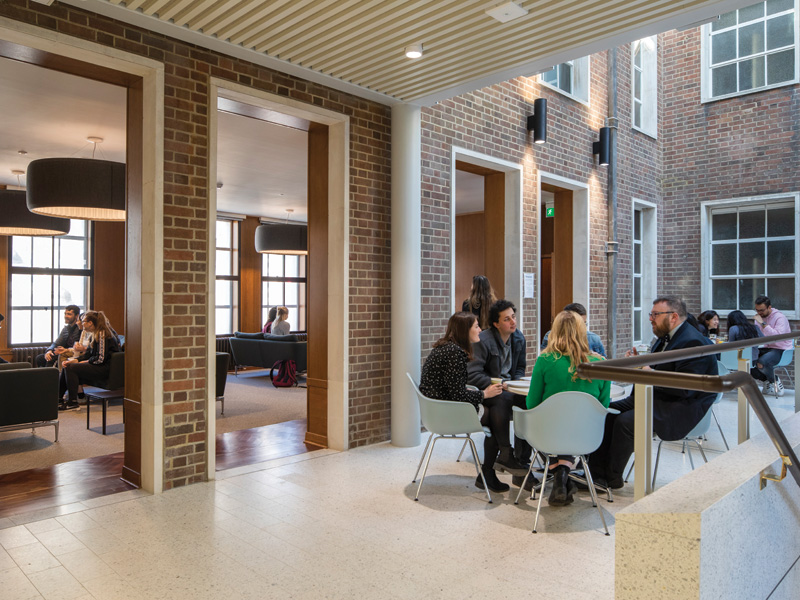 Due to a major redevelopment scheme at UCL Faculty of Laws by architecture practice Levitt Bernstein, the separate buildings of Bentham House and the Gideon Schreier wing now form a cohesive and contemporary complex for the law department of University College London

Purpose built for the National Union of General and Municipal Workers in 1953-7, Bentham House only served as its headquarters for six years. Although fleeting, Bentham House is a rare example of an architecturally considered, purpose-built union headquarters, in part due to it being built at the peak of union membership and power.

Clustered around London train stations serving the North and Midlands, there are numerous other union buildings in the vicinity of Euston Road that, while they could have been put to the same use, are considerably more modest architecturally. Designed by H and H Martin Lidbetter, the UCL Faculty of Laws moved into the Grade II listed Bentham House in 1965. It expanded into the neighbouring Hillel House in 2001 to form the Gideon Schreier wing, creating further teaching space for the expanding faculty. By 2013, with parts of the estate nearly 50 years old, it became apparent that the space could not accommodate the needs of the faculty. With the buildings never having been conducive of the collaborative, open environment that an educational facility necessitates, UCL Estates took the view that in order to keep UCL Faculty of Laws in Bentham House, its already fragmented campus must be united and expanded. Architecture practice Levitt Bernstein has taken these two disparate, non-educational buildings and created a unified campus with state-of-the-art facilities to nurture research, teaching, learning and a sense of community. This has been achieved by reworking the existing spaces and adding a bold new five-storey atrium, to unite the separate wings and in the process becoming the heart of the faculty.

The new atrium space sits in what was previously the Bentham House courtyard, with the original external facade and its windows fully retained as a nod to the building’s previous form. This new atrium space connects Bentham House, the Gideon Schreier wing and new teaching and research spaces located behind the Gideon Schreier wing. The atrium is central to the scheme in both location and function, simultaneously rationalising the space, providing enhanced teaching space, and improving accessibility, wayfinding and acoustics across the campus. Perhaps most central to Levitt Bernstein’s interventions is a drastically improved wayfinding strategy, owing to the rationalisation of the previously divergent buildings. The two buildings, previously only linked at first-floor level, are now inextricably intertwined, resulting in a much more accessible, easy-to-navigate layout. New circulation spaces display a highly rigorous design, necessary to bring together two standalone spaces.

Yet these circulation spaces are not just that – the areas are generous, allowing spaces to meet and gather, facilitating chance interactions. This blurring of the circulation and the communal necessitated an additional layer of complexity on top an already intricate design. But the environment it creates is integral to creating this collaborative educational community. Levitt Bernstein’s MD, Matthew Goulcher, believes this new space is integral to the scheme, commenting ‘the building now not only houses state-of-the-art facilities, flexible teaching and learning space of all scales, but also has a new identifiable heart – a hub space for everyone, that brings staff and students together and architecturally celebrates the melding of the old and the new with style.’

Now, as well as being infinitely more accessible from the main building, the Gideon Schreier wing has been reclad in Portland stone to create a unified street facade. In this careful intervention, the faculty is able to give something back to the landscape it is such a significant part of, with an improved and consistent architectural language on Endsleigh Street and establishing the Gideon Schreier wing as a visible part of the Faculty of Laws campus.

The rear extension features the same brick and stone used throughout, but this time in a distinctly modern fashion. The glazed atrium links the two buildings with slender precast concrete mullions, creating a sense of transparency in the key circulation area.

The teaching and circulation spaces have been rationalised by completely disregarding the original floor plans – looking instead at what can be done within the current structure and foundations. By overhauling the outdated and not-fit-for-purpose spatial organisation, Levitt Bernstein has created much more usable, open and inviting spaces, while eliminating dead space and unnecessary circulation and storage space. This has resulted in the rebuilt teaching spaces on the lower floors being just as high quality and functional as the new teaching space on the additional floors, with all now having space for wheelchair users. Levitt Bernstein has integrated numerous sustainability measures in the redevelopment. A photovoltaic array of 78 sq m will generate 5.05kWh/sqm for the campus, providing payback in 11 years. An integrated natural ventilation and airflow strategy in the building’s core design forms the foundation of the development’s heating and cooling strategy.

This, combined with the use of LED lighting, water-efficient bathroom fittings and green roofs, contributes to Bentham House’s carbon emissions being 25 per cent lower than building regulations require and achieving a BREEAM Very Good rating.

UCL Laws is consistently a high-ranking institution, but its facilities definitely did not reflect this. Through carefully considered spatial planning and sensitive interventions, Levitt Bernstein has created an educational facility that like its occupier does not need to be boastful. In its renewed street presence and additional teaching spaces, the UCL Faculty of Laws building is highly functional and successful thanks to the Levitt Bernstein scheme, but it is the renewed sense of community brought by the transformed communal spaces that allow this project to sing.