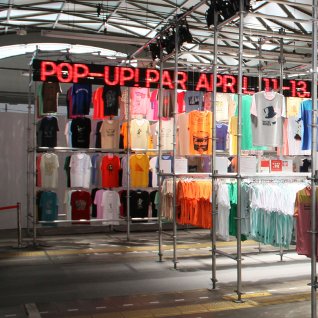 The 660 square meters store offers more than 12,000 UT t-shirts in over 1,000 different designs and types. In addition, Uniqlo has launched 100 new types of T-shirts to mark the launch of store.

The UT Camera, a new smartphone video app, on site at the new store allows visitors to take part in a shoot that is then projected onto a venue wall through projection mapping so that participants appear in a campaign visual. The footage may also be used in future UT TV advertisements.

Visitors can also download UT Camera that turns one second personal looped video portraits into animation. The footage can then be uploaded to the official UT website for those sporting UT apparel, and linked to Facebook, Twitter, and other social media platforms.

Uniqlo is also planning to replicate the experience at other UT POP-UP! stores worldwide. This is the first new marketing concept Uniqlo have employed in the company’s 10-year history of selling UT’s. The initiative, builds on the traditional pop-up shop concept, and is aimed to expand Uniqlo’s reach to customers.

The shop is located on the site of the recently relocated platforms for the Toyoko Line at Shibuya Station, in Tokyo.