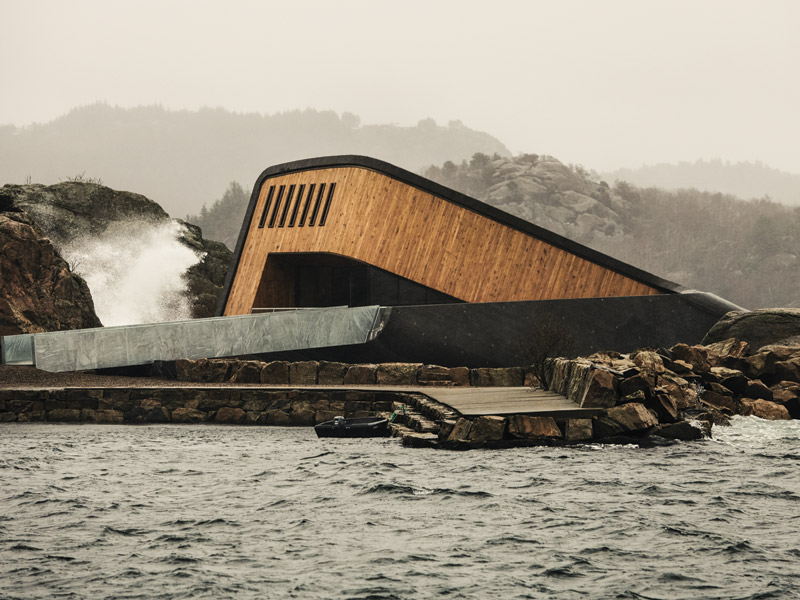 In a remote spot of Norway’s coast, Snøhetta has designed Under — a project that is as surreal, elegant and surprising as a half-submerged concrete tube can get

The words ‘underwater restaurant’ at first may conjure in the imagination some flashy seven-star hotel development in Dubai, dripping in artificiality. For such an establishment to in fact be found on an unassuming, quiet and remote part of the Norwegian coast, then, comes as somewhat of a surprise. In the sparse village of Båly, in Lindesnes — a rocky landscape on Norway’s southern tip, dotted with red hut houses and boat sheds — the two sibling owners of the one local hotel decided to create ‘something spectacular and of international interest’, says Stig Ubostad, one of the brothers.

Their first thought was a fine-dining underwater restaurant attached to the hotel. And — once they had approached Oslo’s own Snøhetta for design ideas — the brothers commissioned the practice to bring their idea to life. Despite the concrete almost blending in with the rocky shore, on first glance the project looks as if a building has fallen into the sea. Credit: Ivar Kvaal

That was four years ago, and now the subaquatic restaurant — Europe’s first, and an Instagram mecca if there ever was one — is open, housed in a surprising, unique and wholly delightful building. The aspiration to attach it to the hotel, Lindesnes Havhotell, didn’t quite work out, so it stands on its own, a three-minute walk round the bay. A surreal sight, with simply a slanted block of concrete and wooden cladding visible above the water’s surface, it somehow blends into the landscape — its shape and materiality largely subtle against the surrounding rocky shoreline — but also has an intriguingly unnerving appearance, as if a building has tipped sideways and fallen into the water.

It is, in essence, a concrete tube — a relatively simple solution arrived at, as project director Rune Grasdal says, after a great many models and drawings that depicted complicated shapes: ‘In the end, we realised the easiest way was a straight line, a tube.’ At an angle of 20 degrees, this 34m-long concrete tube, with 50cm-thick walls, is given a wide, level base to form the restaurant and kitchen floor, 5m underwater, with a huge pane of glass forming a window out on to the seabed. Despite the concrete almost blending in with the rocky shore, on first glance the project looks as if a building has fallen into the sea. Credit: Inger Marie Grini / Bo Bedre Norge

Were it not for eight ‘anchor’ bolts, the structure would actually float, despite its 1600-tonne weight. ‘It really is a vessel. It is floating,’ comments Snøhetta founding partner Kjetil Trædal Thorsen. He explains that the building was constructed on a barge next to the hotel, between November 2017 and July 2018, sealed at one end with the pane of glass, and then floated across the water into place. It was then — brilliantly — filled up with water so that it would sink into position, with 10m of the structure height above the water and 5m below it. Then the building was bolted to a concrete slab anchored to the bedrock beneath the seabed, and fully drained of water. Once drained, the interior fit-out could begin.

The 495 sq m interior consists of an entrance space at the top, a mezzanine halfway down with a bar, and then the restaurant and kitchen at the bottom, all connected by a generous oak staircase lined with dark, raw steel railings. When you stand inside the glazed entrance space, accessed via a galvanised steel walkway and ship-like wooden deck, you can see uninterrupted straight down to the bottom and through the large window into the entrancing turquoise sea.

It is like standing at the very top of a theatre auditorium and looking down at the lit-up stage. Equally, down on the restaurant floor, you can look all the way up to the entrance. This design successfully limits any potential claustrophobia created by being in what I originally imagined would resemble a submarine, but in fact is a surprisingly spacious and elegant interior. ‘We had to address the potential for claustrophobia very carefully,’ admits senior interior architect Heidi Pettersvold Nygaard, who comments that the aim of the interior was to create a ‘warm, soft, secure’ environment that contrasts with the rough and resilient exterior.

The unified space inside the building allows daylight to infiltrate down from the entrance, enhanced lower down by a vertical strip window on the structure’s side that starts 1m above water level and descends across floors to 1m above seabed. As well as bringing light into the mezzanine and restaurant (in daytime, at least), this window provides a delightful view of the waterline on the mezzanine level, creating a playful sense of submersion. Under’s long side window spans two floors, both under and above the waterline. Credit: Ivar Kvaal

The materiality in this upper half of the building is intensely warm, created by the hues of the oak floor wrapping up around the walls and the coral-coloured, synthetic textile-panelled ceiling, as well as the similarly coloured, wool-fabric seating system that defines the entire nook-like mezzanine bar area. Kvadrat worked with Snøhetta on both the seating system and the ceiling textile panels, the latter of which have vital sound-absorbent and fire-retardant qualities. These woven ceiling panels continue along the entire length of the building, descending all the way to the large underwater window. They are dotted with 380 subtle LED fixtures that carefully control the interior lighting.

As you descend into the lower half of the building, and thus move further towards the seabed, the colour palette becomes cooler; the hues of the ceiling panels subtly transform to green and then to intense blue. As Nygaard explains, this both reflects the journey of the visitor moving slowly underwater and echoes the colours of the surrounding Nordic sea and sky, from red sunset to deep blue sea. In fact, as you finally arrive at the lowest level, the seabed and the restaurant, this blue textile panelling wraps down across the walls, replacing the oak, reaching the terrazzo concrete floor underfoot. Having the panels cover the walls both envelops the visitor (‘It hugs you a little bit,’ comments Nygaard) and crucially ramps up the acoustics management in the restaurant space. The view from the mezzanine down to the huge window looking out on to the seabed. Credit: Ivar Kvaal

But it might take a while for you to notice this blue panelling, as the restaurant level is where the showstopper is: the 10.8m by 3.4m pane of glass looking out into the theatre stage of the seabed. When we visit on a bright March day, the rays of sunshine powerfully penetrate the water, illuminating it bright turquoise. We may not be immersed in the water ourselves, but we have certainly arrived in an underwater world, where everything is bathed in a cool, turquoise, dream-like light. Here, there is space to seat 40 diners around tables and chairs all specially designed by Snøhetta for the restaurant, and all made of oak, sourced — like all the wood used in the project — from a forest 2km away, in collaboration with local carpentry workshop Hamran. There are only three dining tables next to the large showstopper window — so you might be a bit miffed if you get seated further back, without the direct view of the seabed and its thriving marine life.

Once down on the restaurant level, everything is bathed in a cool turquoise light (in daytime, at least). Credit: Ivar Kvaal

This is no carefully curated aquarium scene, though. Fish have not been plucked from their habitat and made to perform for the visitor. The window simply looks on to the natural seabed — fish come and go as they please, weather changes the lighting and current, seasons alter the clarity of the water. The scene is always in flux. As Thorsen says: ‘It’s not an aquarium, it’s not controlled. You can think of it as an inverted aquarium, where the fish come down to look in at the people.’ What the fish might think of those people eating, in turn, locally sourced fish — there is an emphasis on sustainability in the kitchen as well as in the construction — is of course another matter. The view up to the top of the building from the bottom, showing the transition from the cooler colours up to the warmer tones . Credit: Inger Marie Grini / Bo Bedre Norge

As for the impact of the building on this natural marine environment, this is actually a leading line of research for the project, led by resident marine biologist Trond Rafoss. The building is referred to as ‘Norway’s first shallow-water coastal observatory’, and cameras attached to the exterior underwater record constantly, creating a wealth of data about the marine environment and fish behaviour for the researchers. At night, the seabed is lit up by lights attached to the building exterior, attracting fish (and providing night-time underwater views for diners). What’s more, over time the building will function as an artificial reef on the seabed. Already the concrete shell underwater is coated in dark green algae. There are also plans for an offsite marine research visitor centre, in one of the small huts dotting the walk from the hotel to the restaurant, so that you can get a slice of knowledge to go with your haute cuisine. ‘You can think of it as an inverted aquarium, where the fish come down to look in at the people,’ says Snøhetta founding partner Kjetil Trædal Thorsen. Credit: Ivar Kvaal

But algae and fish are not the only aspects of the environment that the building needs to adapt to. Here, at the southernmost tip of Norway’s coast, North Sea storms rage, high winds blow and powerful waves crash. Under has to be resilient to all of this, including the oft-cited ‘hundred-year wave’ that all designers in marine contexts are told to consider. Indeed, Snøhetta worked with engineers experienced in these contexts, at firms Submar and CoreMarine — engineers who are more used to constructing oil rigs than luxury restaurants. All effort has been made to ensure that Under’s structure — including the large subaquatic window, which is 27cm thick — is stable and safe enough for whatever stormy, watery conditions might battle it. At night the interior light glows out on to the seabed through the windows. Credit: Ivar Kvaal

At NOK700m (£6.2m), Under has been a significant investment for the owners, who, as well as the adjacent hotel, own another hotel in the region. But Båly is a good 80-minute drive from the closest airport and 60-minute drive from the nearest train station. What’s more, apart from the landscape, there’s not a great deal for people to see and do in the area. Almost immediately I worry that one of the most exciting restaurants, and buildings, has been built in an unfortunately inaccessible place. Just another part of the rocky coastline: Under from above. Credit: André Martinsen

But fears of empty seats and scarce visitors are unfounded: apparently, the restaurant is booked up for half a year already, with 7000 seats sold (likely much more now that the project has officially launched). Perhaps the same success in such a remote location could not occur were it not for the age of Instagram and internet, but that’s cynicism for you.

Under is both a sensitive and surprising building, which offers a magical experience at the same time as serving as a helpful marine biology tool. It’s just a long way to go for dinner.

This article was originally published in Blueprint issue 364. Buy the issue here, or subscribe to Blueprint