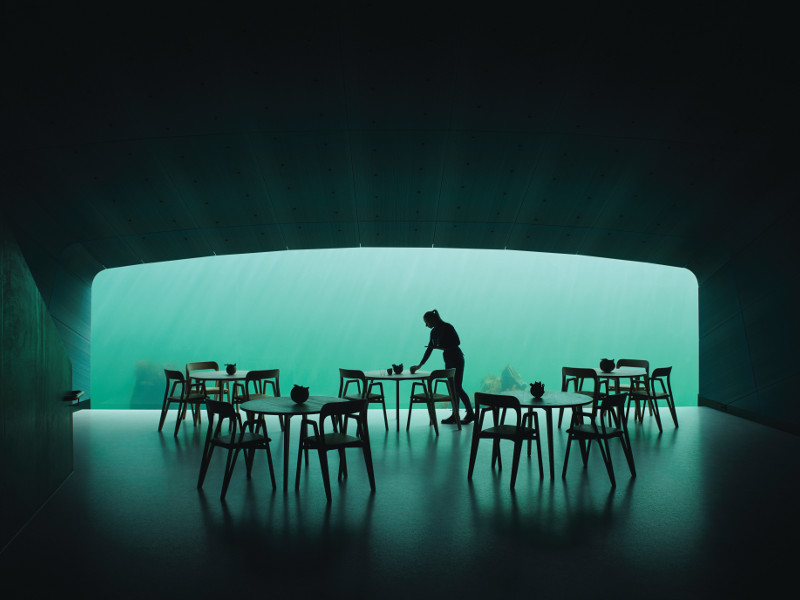 Bar + Leisure Focus: Semi-submerged in the icy waters off the Norwegian coastline, Under is Europe’s first restaurant below the sea

Dramatically semi-submerged in the swirling icy waters off the Norwegian coastline, Under is Europe’s first restaurant below the sea. It resembles a shipping container, albeit a high-spec one, that has drifted through the North Sea and crashed into the rocky coastline at a 20° incline. Thick concrete walls enable the structure to withstand whatever the sea can throw at it.

The recently opened, unique Snøhetta-designed 495 sq m restaurant in Lindesnes also functions as a research centre to explore the natural abundance of marine species found in the waters at this location.

‘In Norwegian, “under” has the dual meaning of “below” and “wonder”,’ says Rune Grasdal, project manager and architect at Snøhetta. ‘Half-sunken into the sea, the building’s 34m-long monolithic form breaks the surface of the water to rest directly on the seabed 5m below. The structure is designed to fully integrate into its marine environment over time, as the roughness of the concrete shell will function as an artificial reef, welcoming limpets and kelp to inhabit it.’

The experience at the 40-seat restaurant is like no other. Diners pass from a changeable external environment into a hushed Norwegian oak-clad foyer. An oak staircase with raw steel railings and brass tube handrails descends into the warm and welcoming restaurant. Here, the ceiling surface shifts from oak to bespoke woven textile stretched over custom acoustic panels, creating a rich interior. The deeper the diner descends, the darker the textile colour becomes, changing from a neutral colour to sunset pink, intense coral, sea green and culminating in a midnight blue in the dining area. At the mezzanine or bar level, where the building touches the sea, a vertical window extends from above sea level down to the seabed, providing a glimpse under the water. Meanwhile, at the deepest level, in the dining space, a spectacular 11m-wide, 3.4m-tall expanse of glass allows diners to take in an incredible view of marine life. The restaurant’s concrete shell was built on a barge 20m away from the site. According to Grasdal, Under is the most unconventional project he has ever worked on, and the greatest challenge was submerging the structure in the ocean.

‘During submersion the structure floated on its own and was delicately moved to its final location by a separate crane and tugboats,’ he says. ‘This was the riskiest phase, but thankfully it went well!’

After being submerged, the structural work was completed and the building was bolted to a concrete slab anchored to the bedrock and the interior fitted out. With its thick concrete walls the structure is built to withstand pressure and shock from the rugged sea conditions.

All the furniture in the restaurant is bespoke, employing traditional hand-crafted methods, with the chair as the focus. The furniture represents the philosophy of the project, which is to build solid structures without compromising the inherent natural beauty of raw materials.