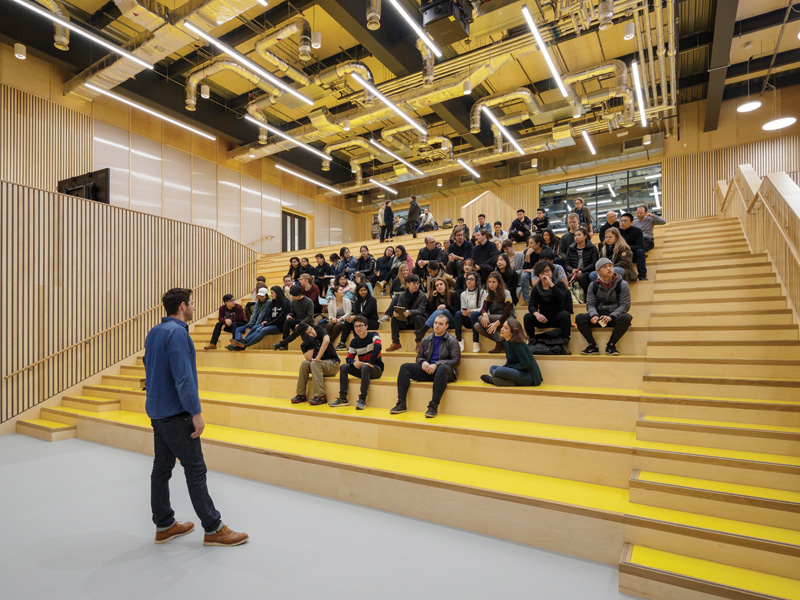 UCL’s new outpost at Here East in Stratford has been designed by Hawkins\Brown to facilitate innovation and cross-disciplinarity, with a 2,000 sq m prototyping laboratory

The Queen Elizabeth Olympic Park remains a strange place for many Londoners. Squeezed between the characterless megamall of Westfield Stratford and the fast-gentrifying Hackney Wick, the park is home to popular playgrounds, West Ham FC and state-of-the-art sports facilities, but it hasn’t yet shaken off that all-enveloping surreal gloss of a new place bursting into existence — and it’s still just a bit inaccessible and navigationally perplexing.

In the north-west corner of the park, overlooking the River Lee, lies a very big box, once used as the Broadcast Centre for the 2012 Olympics: Here East. At 76,180 sq m, this main box space — part of a complex of buildings — is large enough to house six Boeing 747s. ‘You wouldn’t be able to build this space anywhere else in London,’ comments Here East CEO Gavin Poole.

The post-Olympics transformation of the site — overseen by developer Delancey, with design work from Hawkins\Brown — focused on turning it into a centre of innovation and making, bringing research arms of global corporations together with startups, creative industries and academic institutions. ‘I wanted to take the gift from the Games and do something unique with it,’ says Poole. ‘The ambition was to create a new economic footprint in London.’

Hawkins\Brown’s approach has been to essentially split the 100m-long space in two, with one half dominated by an enormous, 2,000 sq m fabrication and prototyping laboratory; the other half is dedicated to social and learning spaces, including a 330-capacity auditorium, studio space and a Cat A office fit-out with two Harvard-style lecture theatres for The Bartlett’s new Real Estate Institute. There are separate small labs for practices such as nano robotics, and controlled environmental chambers for testing. ‘The challenge was finding ways to accommodate a broad array of uses,’ comments Hawkins\Brown project architect Tim Noonan as we walk around the complex.

Yet simply having a large, adaptable space was one of the key things UCL desired. ‘Our starting idea was: what could we do if we had a big shed?’ says Alan Penn, dean of The Bartlett. ‘This sort of scale was in no way possible in Bloomsbury. Here we can manufacture and prototype at a 1:1 scale.’ Hawkins\Brown was well aware of the inherent limitations of the Bartlett’s Bloomsbury HQ, 22 Gordon Street, having worked on its renovation and extension (it reopened in 2016). UCL Here East is the final phase of a six-year partnership to rework the faculty’s educational estate, including a third site on Hampstead Road. ‘It made a lot of sense for us to have the same architects for all three projects,’ says Bob Shiel, Bartlett director.

As well as creating ‘the ultimate makerspace’ at UCL Here East, as Noonan refers to the lab, Hawkins\Brown has designed a showstopper of an auditorium, which — with its bleacher seating design and mezzanine section — can accommodate a range of lectures, presentations, meetings or even social gatherings, from 10 people to more than 300 people. The material palette is dominated by birch-based ply in vertical slats, soft lighting behind polycarbonate sheets and bright yellow detailing.

With such open-plan and adaptable designs, the lab and auditorium express a collaborative ethos that lay at the heart of UCL’s ambitions for the project. ‘The lack of divisions or demarcations by department allows us to break down boundaries between disciplines’, says Penn. The built environment and engineering sciences faculties had never before collaborated; at this new outpost, they have the spatial — and academic — means to do just that. UCL Here East will host a brand new undergraduate degree combining engineering and architectural design, as well as five masters degrees in design.

There is a belief that innovation will emerge from this collaboration in itself. ‘This is a big experiment in creating a space for a new kind of cross-disciplinarity,’ says Penn; ‘we are doing it to stay ahead.’ Shiel adds: ‘Architecture as a profession is itself evolving — here we are challenging what architecture could be, as a discipline.’

‘Hawkins\Brown has created an environment that will help us achieve our social aims,’ says Penn. With aims like radical academic innovation and collaboration, it is exciting to see what this new home produces. What’s more, UCL has yet more local plans: next to Stratford station, a whole new campus for the university is underway. Designed by Stanton Williams and Lifschutz Davidson Sandilands, UCL East is due to open in phases from 2020 to 2024. By that point, perhaps the local area will be the connected, coherent community it so aims to be.