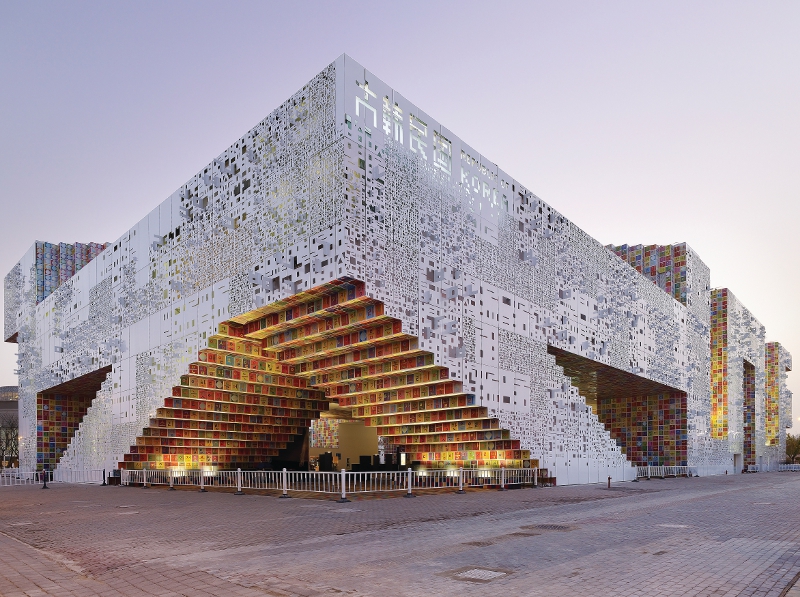 A new book by Brooklyn-based illustrators and designers Mirko Ilić Corp brings together some of the best projects involving typography in architecture, design and art

We might not often think of typography and architecture as having a close relationship, but as soon as you start looking, you see that words, letters and numbers appear surprisingly often in buildings, whether their shapes form part of the structure, give information as to the building's function or simply provide decoration.

Now, New York-based illustrators and designers Mirko Ilic Corp have created a new book which collects some of the most amazing and inspiring projects in which typography comes together with architecture, interior design and art.The authors are Steven Heller and Mirko Ilic, and design is by Mirko Ilic Corp. Called Lettering Large, the book is split into several sections, examining type used in various ways, including 'Monumental Outdoor Type', 'Big and Better: Type as Object', and 'A-R-T in T-Y-P-E'.

Here are some of our favourite projects from the book (text and images courtesy of Mirko Ilic Corp): Centro de Ciência Viva (Science Alive), a science museum in Lisbon, started with design of the foyer to create a perforated wall with acoustic and lighting. The theme of the project is ASCII (American Standard Code for Information Interchange), representing a means of sharing information. The design involves different pattern densities "with bigger or smaller cuts, acoustic percentages and the openings in the window areas of the rear rooms were managed," note the designers in their brief. LED white lighting between the wall and the SKIN was balanced with natural light and the enormous signage is repeated on the floor and on the walls. The type used, OCR-A, is the natural choice because it is a typeface used by computers. This temporary structure to welcome the Olympic visitors was designed and fabricated in just sixteen days. The colorfully playful typography designed by Morag Myerscough reproduced a Twitter post by the poet Lemn Sissay. Myerscough turned a hole in the ground left by demolition into a welcome space that hosted a series poetry readings, musical performances, and a films. In 2008 it was likely that the Lithuanian currency, the Litas, would be superseded by the Euro, and a monument to the Litas wasproposed. The office building showing a 1,000 litu banknote (dating from 1925, during the period of Lithuania independence betweenthe two world wars) serves as memorial for Lithuanian currency. The facade is covered from top to bottom in a striking illustration consisting of 4,500 different types of glass made in the Netherlands. Rob Borgman, a specialist in the screen-printing technique,chosen to paint the image on the glass. Boa Mistura's Participative Urban Art Interventions aims to improve rundown communities, using art as a tool
for change and inspiration. The group had the chance to live in Vila Brasilandia, hosted by a local family, which
gave them direct contact with the community. The project uses the narrow and winding streets that connect
the vielas (alleys). Residents selected words -- BELEZA, FIRMEZA, AMOR, DOCURA, and ORGULHO -- as the
concepts for the intervention, an optical illusion in which the words appear to hang in air The eleven-meter-high cylinder next to the entrance of the Atocha train station is a monument in homage to the victims of the bombings of March 11, 2004, created on the occasion of the third anniversary. The design of the sculpture was "the expression and the sense of Spanish society after the attacks," says Gil-Fournier, as well as an attempt to convey the "immateriality" of those feelings and "make them eternal." The Korea Pavilion was an amalgamation of "sign" (or symbol) and "space." Han-geul, the Korean alphabet, is the prime element of the signs within the pavilion. The exterior surfaces of the pavilion are covered in two kinds of typographic pixels: "Han-geul Pixels" and "Art Pixels." Han-geul Pixels are white panels with a relief of letters in four different sizes whose combination forms the majority of the exterior. Most of the nonperipheral surfaces are composed of Art Pixels, which are aluminum panels created by the Korean artist Ik-Joong Kang. About forty thousand of these bright colored panels are on the facade, and they symbolizen hope and unity. EGO took hubris; it was made of wood and framed with plaster casts of pans, trophies, and religious relics as depictions of ego. The sculpture was set aglow at Burning Man 2012. The idea, Laura Krimpton noted on her blog, was to burn down the EGO and see what remains: "The thinking was that not all of the artifacts would burn, and there would be tokens to take home from the playa when the embers cooled." Type: Twenty fonts that match the timeframe of each text. On this long floor is a ribbon made up of thousands of variously sized, overprinted thoughts (literature, poetry, philosophy) about the Palais Royal in Paris. These texts are phrases from Voltaire, Rousseau, Beckford, Diderot, Dickens, Balzac, Flaubert, Baudelaire, Nerval, Celine, Aragon, Lautreamont, Cocteau, Colette andr Breton, but also from unknown Parisians and occasional travelers who were inspired by the place.