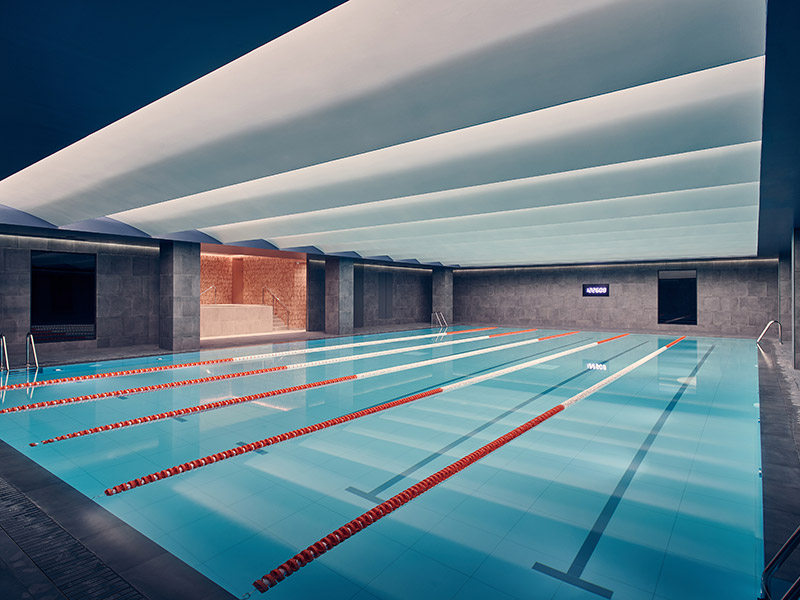 Third Space already has established a recognisable look and feel to its gyms: inviting its customers to ‘be extraordinary’, the gym floors are hard core, while the changing rooms are spa-worthy. It’s a formula it has tried and tested across its branches, now numbering six in London, yet when it came to designing the Islington branch, Third Space wanted something a bit different and enlisted the help of Universal Design Studio, a London-based architecture and interior design practice set up by Barber Osgerby.

Carly Sweeney, project architect and associate director at Universal Design Studio, explains that a lot of time was spent working out the offer for this particular club, because it is so different to Third Space’s other locations. The job started as far back as June 2016 with a thorough research period. This included a trip to the US to see equivalent fitness clubs, as well as extensive focus groups with locals to establish their particular needs in comparison to Third Space’s existing clientele. The biggest difference is that this was the first time Third Space had targeted families, creating its first ever ‘Little Space’. Adjacent to the main gym but accessed via its own entrance within the reception, it has separate facilities including a crèche, a play area and children’s classes. Another point of difference was in the overall colour and material palette, influenced both by the demographic and the local Georgian architecture.

The resulting design is a softer, more natural take on the Third Space brand. Although the differences are minimal they still represented a noticeable shift for the client. Sweeney explains: ‘From our angle it was like, how do we dial it down a notch – like five per cent?’ She continues: ‘You can see it in the colour of the soffit, you can see it in the graphic kind of lighting, and in some of the tones we used in the floor.’ From the reception you can get an idea of the gym’s offer: the natural kitchen, a large lounge area, the entrance to Little Space, and beyond these the pool – designed as the focal point of the whole gym. Wanting everything to draw towards and revolve around this space, Universal Design Studio decided to move it to the centre so you can always catch a glimpse.

Somewhat unusually, it is designed as a ‘moody, monolithic volume’ – an effect achieved by the dark walls and tinted glass surrounding the pool, which helps to reduce the ‘fish bowl’ effect for those inside it. Yet this deep, dark centre might seem more fitting when you realise the club is actually situated several floors underground. That is if you do realise it – superfast lifts conceal the depth to which you descend and artificial light wells across the space are programmed to change temperature with the time of day. For these, and the lighting across the space, Universal Design Studio worked with lighting designers Illuminationworks. The space is large, coming in at 47 000 sq ft. Although there are lots of different zones to the club, the designers didn’t want to create too much variety in the palette. Three large terrazzo desks help unify the key areas, with one in the main reception, one forming the kitchen bar, and one for Little Space’s equivalent family kitchen and lounge.

The walls throughout are coloured with a concrete render called Mortex, a tactile upgrade from simply painting a wall. In addition to Ketley bricks in the reception, inspired by Islington courtyards, the desks feature dark and glossy handmade tiles by Teamwork. The large lounge area, designed to be similar to a hotel lobby in which gym users can either work or relax with a coffee, introduces warmer touches of wooden flooring and soft seating. Various facilities double up for Little Space; not every gymming Islingtonite is a mother of a small child. There is a separate kids’ pool, lounge area, kitchen and changing areas. The same high-end palette of materials and colours is kept for the ‘family-friendly’ areas too. Through focus groups, Universal Design Studio found that even for the kids’ areas ‘a lot of it was to do with performance led fitness’, so as Sweeney explains, the company didn’t do something that was primary colours-led ‘or a bit “chi-chi”, or … condescending almost. So, actually, the look of Little Space is very similar to the main club. The material palette is almost the same, so it feels quite sophisticated for a kids’ club, but it also had to be quite robust.’

There are a few points of difference: for instance, in the family change area there is blue grouting between the tiles and smaller blue towels for children. Practical touches include lower shower fittings and a lowered hair and make-up style area for more independent children. Even the soft-play area, designed by Playzest, feels very in keeping with the overall ethos and aesthetic. Reaching the pool, you enter the heart of this subterranean experience. This, says Sweeney, is the part of which they are most proud. In this calming hideaway, Third Space’s clients can relax post-gym, moving between a red cedar sauna, a hydrotherapy pool surrounded by some invitingly tactile 3D tiles from Teamwork, and the main pool, above which a sweeping suspended ceiling is there for you to gaze at and switch off before you return to your life – whether that be to pick up your kids, or head back to work.

May 2017
Universal handover to executive architects for technical & construction