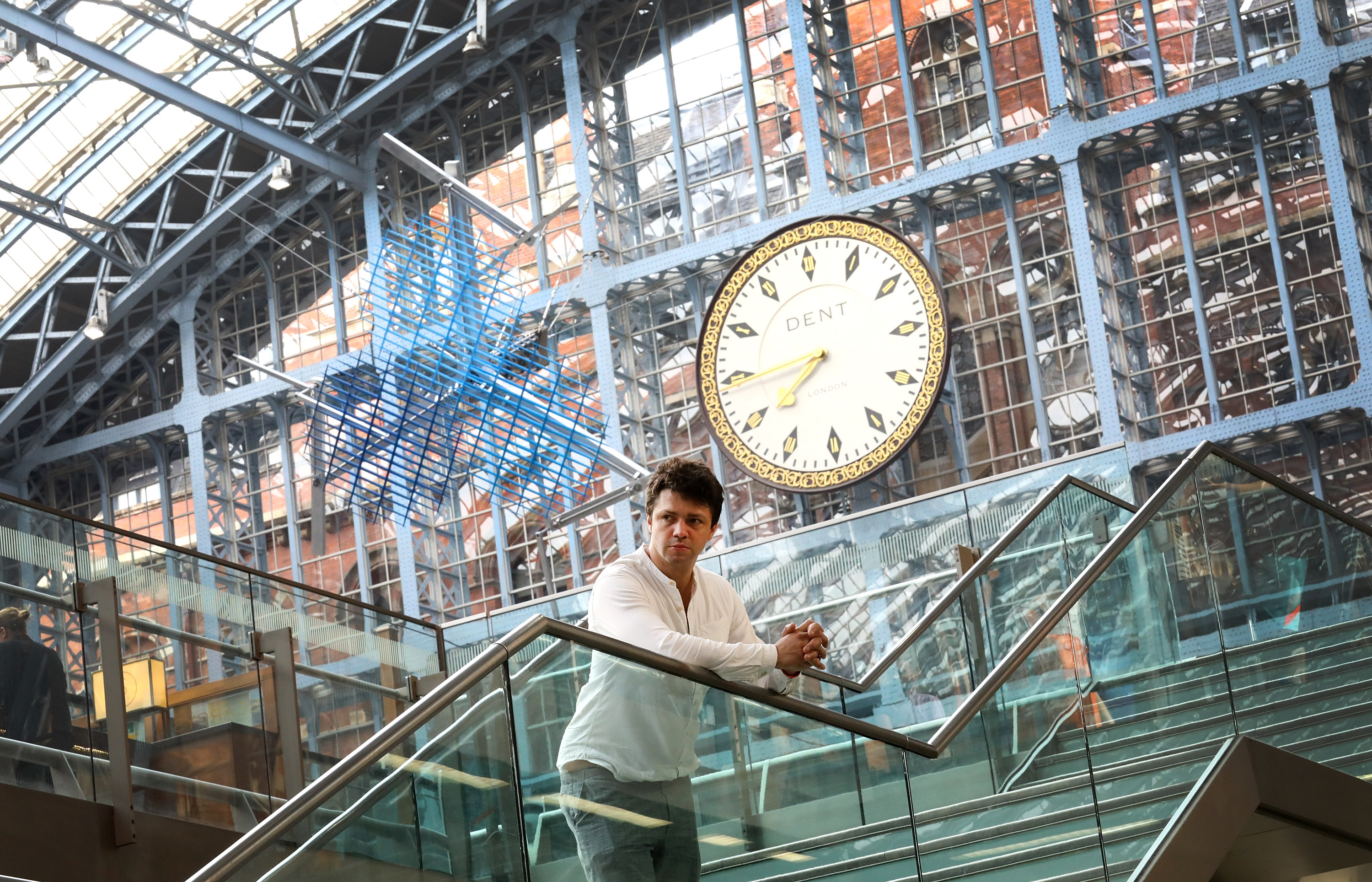 The newest public art installation in St Pancras International station has been unveiled and DesignCurial went to meet Conrad Shawcross - the artist behind the project.

As it eclipses the large clock, the almost ethereal, ostinato movements of the structure are mesmerising.

Until December 2017 the 16 metre structure will dominate the skyline above the station concourse as The Terrace Wires public art installation space plays host to the project named Interpretation of Movement (a 9:8 in blue).

Conrad Shawcross on seeing the installation finally up:

Yes I’m so happy and I’m relieved. It’s so good to have it up finally! It’s been a big labour of love to get to this point. For the last three nights I’ve been working very tough hours.  I’ve been literally sleeping in my car in the car park of Kings Cross, because it’s been easier to drive here at Six and sleep for a few hours until midnight. I’ve been a bit of a hobo in Kings Cross. It’s been good, quite a practical solution.

On the installation process:

It has taken three nights because we’ve only got a 3 hour window, its taken eight hours or so.  We have to get through passport control even if you’re just a worker,  there is a lot of security that you have to do, like when you are boarding a plane, just to go to the other side of this glass wall. It’s very time consuming to do the safety checks, then to get back out you have to go through customs again. It’s one of the things about the commission that wasn’t conceived this way at all, because it was conceived before the referendum.

But actually, what’s happened is that the piece has become quite interesting, by coincidence it’s in quite a pertinent position. This glass wall is essentially the barrier to the free passport zone of Europe and the control zone of England. This is the future boarder of the EU. This has become almost political. It wasn’t conceived in this way, but you can’t help but see it in a political context. I’m really interested in that aspect of an abstract mechanical machine having this political potential. I’m not intending it, but it’s so interesting that it has that potential.

On his vision for the piece:

Well it’s called ‘The Interpretation of Movement’ and I’ve many machines over the last couple of decades now that take specific ratios within music and this one has a 9:8 ratio. So for every nine rotations of the primary arm – the rotation of the whole thing - it moves in and out eight times. It takes 81 rotations for it to repeat itself, for the common denominator of the 9:8 to come back to the same point. It has these Wheels within Wheels and Decelerations and expansions and contraption of these overlapping elliptical parts.

It’s built like a satellite or something, even though it’s way too heavy to be a satellite, it weighs nearly 3 tonnes! But the sails at the end are made of carbon fibre and the body is made of steel and aluminium – lots of very appropriate materials. It’s all very balanced and it feels weightless so it could be a satellite. When it was a bit slower actually it reminded me of a Stanley Kubrick spacecraft or something from Space Odyssey because it had a sort of gyroscopic feel to it.

I find that I’m constantly trying to find meaning within it, but I don’t know what it means. I think that’s what is nice about it. There is movement and there is meaning within the movement but it’s so personal, so particular to the persons own experience and genetics, their upbringing, their nature or nurture and all that, so you can’t really claim ownership of what it means. I definitely don’t want to dictate a meaning.

Usually when I create a piece I attach lights to the ends of the arms which indicated a pathway of light. But because St Pancras Station is so filled with light it wasn’t ever going to work to have lights at the end of it, so it forced me to think in a different way. So I used these optic sails, which came out of experimenting with another thing at the end that is visually arresting. Then to get the parts in front of each other is a real engineering challenge to stack them. They actually come incredibly close to each other; they are like 25mm apart. So it’s quite scary as it wouldn’t be good if they hit. Everything has to be really synchronised and engineered so it can’t slip or move at all.

‘Terrace Wires is a highly visible programme for public art, suspended from St Pancras International’s iconic Barlow Shed roof. It offers 48 million travellers each year the chance to experience the latest contemporary art as they pass through the station. This partnership between HS1 Ltd. and the Royal Academy of Arts builds on the shared belief in the values of bringing art to the community whilst celebrating the approach in 2018 of both the Royal Academy’s 250th anniversary and the 150th anniversary of St Pancras station. The commission is the Royal Academy’s only external public sculpture series in London and is free to view.’