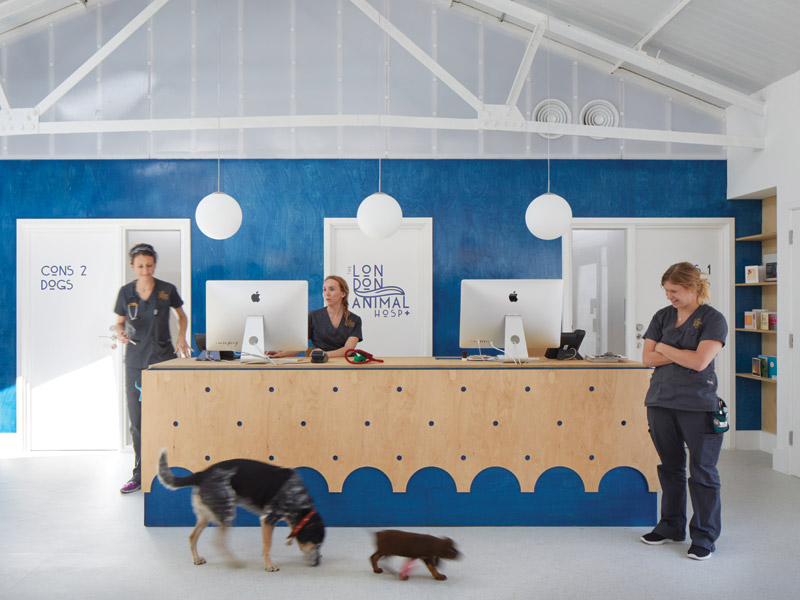 In 2015 the former industrial printworks at Kenbury Street, Camberwell, was left deserted, clouded in an air of mystery. Having been home to Camila Batmanghelidjh’s Kids Company, the once useful and necessary building, in August 2015, only held the abandoned toys and echoes of previously lively play areas, after the charity’s sudden, contentious closure. Until 2017, the building still stood in the shadow of its former life; a reminder of the cracks left in the community by the loss of the charity.

Alma-nac has taken this former printworks and given it a new sense of purpose. With a renewed use, image and reputation, it is now home to the only 24-hour animal hospital in central London. Plywood was selected to create bespoke joinery, including seating, desking and shelving

The building fabric was in disrepair. Set down an inconspicuous alleyway among the back streets of Camberwell, the simple rectangular warehouse is surrounded by thin linear extensions to fill the irregular-shaped site. These proportions made for a complicated spatial configuration within an ever-decaying structure. With the help of engineering firm Constant_sd, alma-nac was able to retain the existing exterior walls, slab and steel trusses and reconfigure the warehouse space with partitions that don’t touch the roof – putting on display the renewed structure and aiding wayfinding.

In what could be a fundamentally clinical environment, alma-nac has ensured a sense of calm permeates, informed by the notion that calm owners and works make for calm pets, aiding their response to treatment. The reception area is generous in space and light; alma-nac has produced a space in which one would want to spend time. Appropriately insulated walls throughout also provide an essential acoustic barrier to support this peacefulness. Dominating the visual appeal of the animal hospital is the striking blue colour scheme. While the base palette is predominately dictated by the colour of necessary medical equipment and furniture, all other interventions are custom built of plywood. It has been used to create interest with playful patterns stained in the signature deep blue. The existing brick structure has been repainted, while new plywood architraves reference the fitted furniture and are left unfinished.

This bespoke approach to furniture and fittings provided the practice freedom in its limited choice of materials suitable for medical use. Chris Bryant, director of alma-nac, says of the specification: ‘At the detail level materials were specified that provided ease of cleanliness or natural anti-bacterial properties. Building materials were checked for latent health impacts, including any off-gassing, leading to the use of ecological paints and varnishes, and the avoidance of any MDF, ensuring a space that was as focused as possible on the holistic wellbeing of the patients.’

In a design that centres the animal as the client, predicting behaviour and spatial use is complex. Even as a hospital predominately for small animals, these creatures are still bound to their natural instincts. In its spatial reworking alma-nac has taken every measure to lessen the unpredictability of their behaviours. Central to this is the strategy to keep nature’s antagonists separate: the cat and dog. While distinct dog and cat kennels and consultation rooms are a given, alma-nac goes a step further. The reception and waiting area is divided in two by a duo of custom-made, plywood furniture clusters. One cluster reads ‘cats only please’, the other ‘dogs and friends’. Whether a necessary doctrine of the animal kingdom or an uplifting detail to a traditionally sanitary typology, alma-nac has woven lightheartedness through the scheme. Large glass doors offer the entrance/exit to the animal hospital. A smaller private exit for grieving owners is set back slightly to the left

Alma-nac has celebrated the uplifting influence of animals with what on the surface is a light-hearted scheme. The unambiguous care for the animals is obvious, yet in quiet details the design is thoughtful right through to the end of pet’s lives. The terminal care aspect of the practice is completely separate, where a bedroom is provided should owners wish to stay overnight. Adjoining this is a separate exit, for distressed owners to leave quietly.

When Camberwell lost the Kids Company, it lost a part of its community. An organisation that it gave its trust was not just taken from it, but was shrouded in discontent. What was left was the echo of a building, as a reminder of what had been lost. In The London Animal Hospital, it seems that alma-nac has begun to reinstate the animation back into the community with an uplifting and cheerful design with the care of animals of its heart.