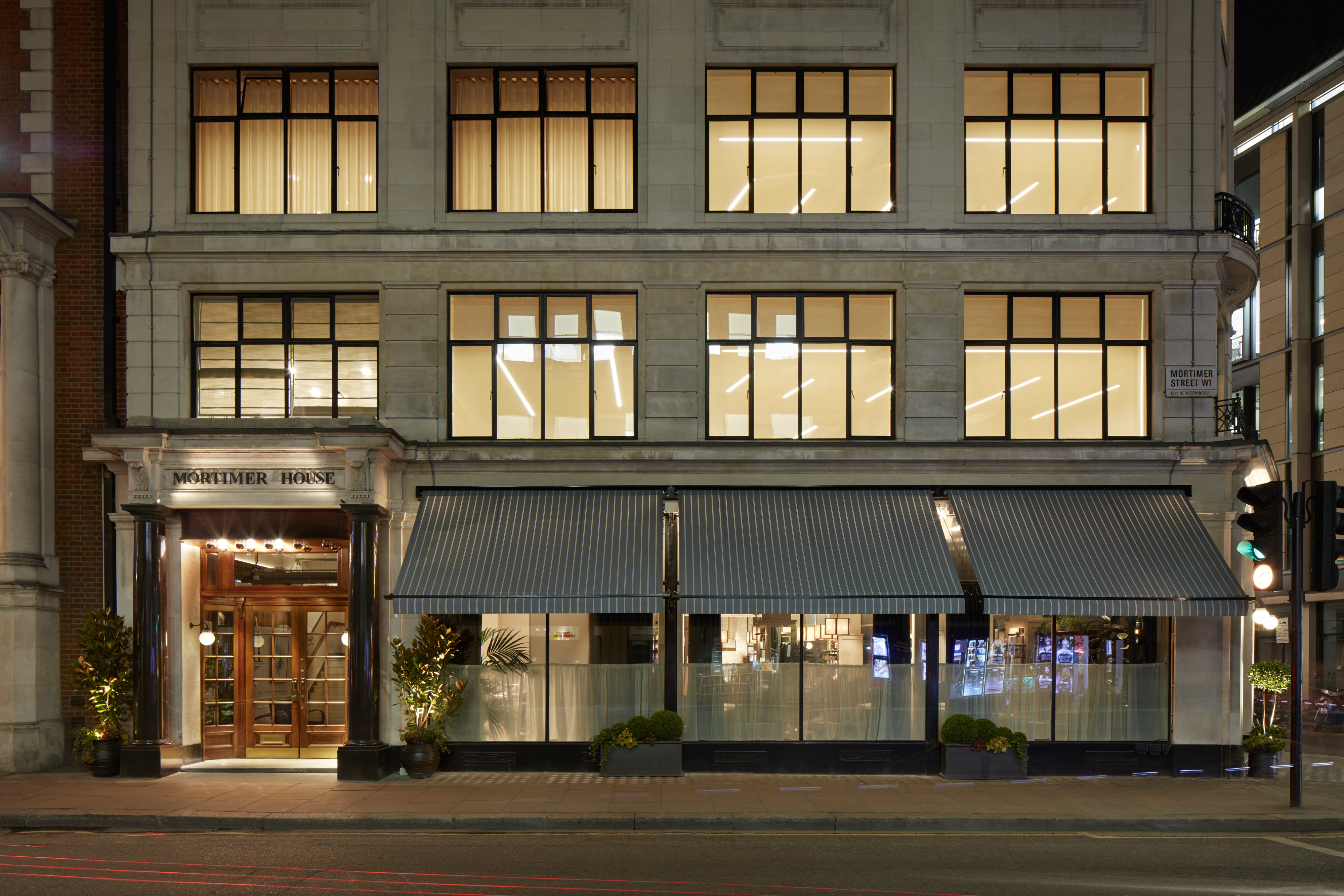 In the heart of Fitzrovia, surrounded by contemporary furniture showrooms, sits Mortimer House – a new workspace and wellbeing destination that boasts a sophisticated, welcoming restaurant.

Opened on the 20th November, Mortimer House sits on the crossing of Wells and Mortimer Street; a majestic six-storey Art Deco building, the site has been lovingly restored by interior design firm AvroKO to become a new premium workspace and wellbeing London destination. Members of Mortimer House can use the space for discussion and communication, allowing them to create, work or relax in the multi-use space.

Mortimer House combines post-modern design with features that have been exposed in the original 1930’s building; the six-storey Art Deco structure includes a public restaurant on the ground floor, four floors of workspace, a gym and a yoga studio.  Former hotelier Guy Ivesha, the founder and CEO of Mortimer House, developed the concept for the space - the idea is derived from the venue’s namesake, Abraham Maslow, and his well known psychological theories surrounding human motivation and happiness. Maslow’s Hierarchy of Needs has been visualised throughout the building by interior designers AvroKO, translating the philosophy into the design and layout. Maslow’s idea that basic human needs are 'simple but crucial' has been channelled through the tightly focused design narrative. First of all comes the “physiological needs” base level of Maslow’s Hierarchy, which has been adapted into the ground floor restaurant, Mortimer House Kitchen.

Open to both Mortimer House members and the public, the restaurant features original details from the Art Deco building, such as marble mosaics, wooden floors, concrete columns and terracotta ceilings. AvroKO have carefully exposed these features, melding them with newly constructed (but period specific) details and furnishings such as festoon lighting and long mirrors. Focusing on health and wellbeing, the restaurant is adorned with a variety of indoor plants and is kept bright by the natural light seeping through large windows and glass ceiling in the 'conservatory'. The next level of the Hierarchy, “social belonging”, is shown throughout the four co-working floors for Members, which provides fully furnished and intricately designed workspaces. These workspaces range from private studies, communal living rooms and a variety of meeting rooms, one of which has its own kitchen. Members can also easily order items off the Mortimer House Kitchen menu to be delivered up to their chosen workspace.

These co-working floors have been designed to nurture a sense of community; gathering spaces have been strategically placed throughout the floors and the classic tea trolley has been reintroduced to foster conversation between strangers. AvroKO has also used a specifically neutral palette of colours on these floors to allow the Members' individual working styles to define the aesthetic of each space. Moving up, the fifth floor of Mortimer House is home to the Living Room and Den, which has been influenced by Maslow’s “esteem” level on the Hierarchy, exploring self-confidence and human curiosity.  The layout includes a central bar, fireplaces, a mid-century library and an outdoor balcony with views of the London skyline. Meanwhile, the interiors have been carefully chosen to work with the Art Deco building, and feature a diverse collection of vintage, 1940’s furniture mixed in with modern pieces. Everything on this floor is designed to inspire natural curiosity in its visitors by mixing old and new, whilst offering them an informal social setting.

Finally, the Loft & Gallery is situated in the sixth floor; it acts as an events space, quiet work floor, and also a gallery of rotating art installations. The floor echoes the “self-actualisation” of the Hierarchy, and has been designed as a simple, white-washed space with no material ‘clutter’. Altogether, each floor works together to bring the inspiration of Maslow’s Hierarchy of Needs to life. Of the design and inspiration, AvroKO principal Adam Farmerie said, “we, as a design company, think about this type of psychology often, bringing what we call 'hospitable thinking' into projects that aren’t 'traditional' (restaurants, hotels, etc.) spaces, and so the connection to Maslow’s Hierarchy of Needs pyramid felt naturally sympathetic.”

Though much of this magnificent Art-Deco building and its carefully designed interiors are only open to the Mortimer House members, this is not something to be disheartened by. Mortimer House Kitchen operates almost as a separate entity to its big brother, Mortimer House, and is open to the public seven days a week for breakfasts through to dinner. It is a sophisticated, open-plan restaurant that offers dinners the hospitality and beautiful interiors that Mortimer House pride themselves in, without them having to buy a monthly membership.