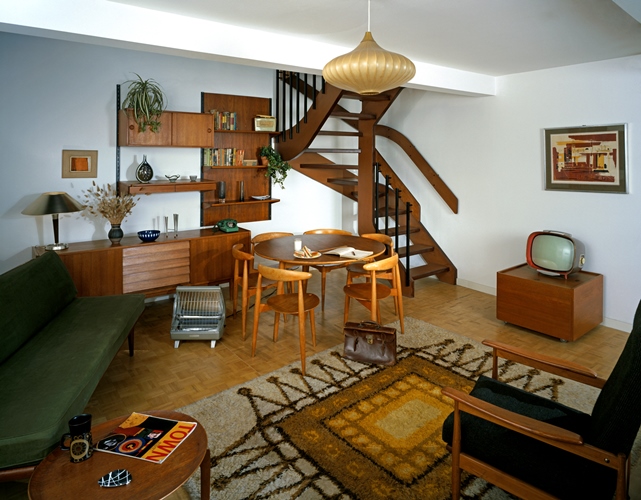 Interior design has changed a lot over the years. Looking back to the past it’s hard to imagine how people lived without modern luxuries like electricity and heating. Thinking about it, it really was impressive.

The Geffrye Museum of the Home in East London has created a brand new interactive tour that allows you to step back in time and see what living was really like back in the day.

Travel back through four centuries of London's urban homes and interiors, from before the Great Fire of London in 1666 up to today.

Each room reflects the ways in which the middle classes, who had steadily grown more affluent in the years following the Industrial Revolution, lived at home.

Here at DesignCurial, we found it all fascinating so we thought we would provide you with some highlights from the tour.

A typical 18th-century parlour from a Covent Garden townhouse

This luxurious townhouse displays exotic goods from the East India Company's early imports. The look includes walnut chairs with upholstered red seats made with woollen cloth. These chairs were known as 'India back' chairs because they were inspired by East India Company imports. A hall which stood before the Great Fire of London

Often located on the first floor, this typical hall in a London home in 1630 has interior design consisting of oak panelling, or 'wainscot' as it would have been called at the time, casement windows, green woollen curtains and a woven rush mat on the floor.

A 19th-century drawing room in Clapham

This was the era when the middle classes could afford to have a separate drawing room, just like the upper classes. The interior design focused on large windows and elaborate drapery, and the fireplace became less important. Other highlights of the room are the Regency-imitated carpet and classical furniture and flourishes.

The 19th century saw the middle classes move out from the centre of the city to the quieter suburbs. This meant that the drawing room or parlour could be located on the ground floor and often at the front of the house. As havens of comfort, peace and warmth, Victorian homes like this one contained elaborate curtains and fitted carpeting, richly decorated furniture and plenty of ornaments and pictures.

When it came to the 20th century, the living room was typically smaller. This replica of a traditional Streatham flat's living room showcases the minimal interior design, which would either be modernist or neo-Georgian. Colours were pale and plain designs can be seen throughout rather than elaborate patterns. Rugs would sometimes be used to add a dash of boldness or colour.

A modernist townhouse living room from a small Highgate estate

Open plan to maximise space, this townhouse living room displays the domestic informality of the era. No longer is the fireplace the centre of the room as the TV has taken over with furniture pointing towards this new piece of technology. Storage units were practical and simple, and the coffee table lies low so as not to get in the way of the TV.

A loft-style apartment in Shoreditch

During the 90s there was a boom in open plan warehouses, built to meet the needs of the expanding financial sector. Defining features of these apartments included vast amounts of space and an industrial aesthetic, far removed from conventional homely builds. Walls would be mostly white, with an ‘accent wall’ painted in a bright colour. Including the kitchen in the living space is one of the most enduring aspects of loft conversion living.