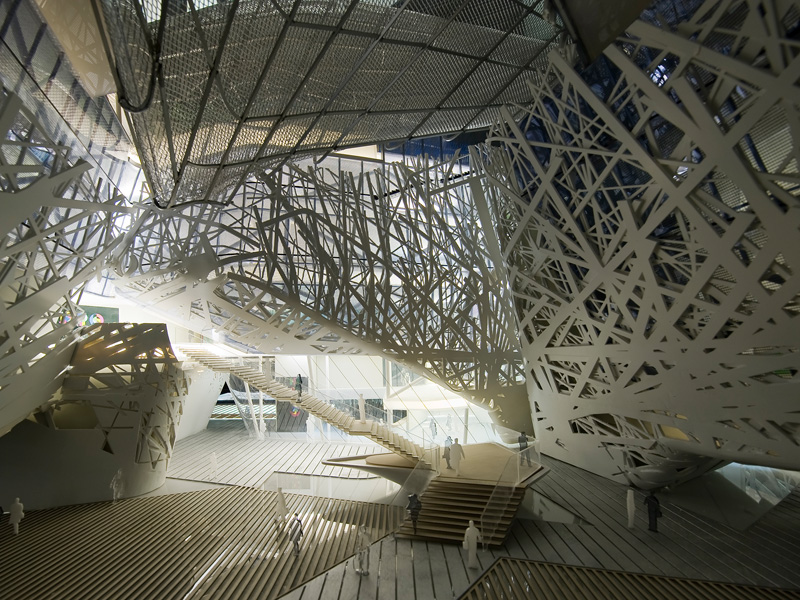 Scientists and architects have some things in common: an attention to detail for one and a futurefacing attitude to know what will benefit the built environment for another.

Rachel Armstrong, a professor at Newcastle University, is best placed to kick off a discussion about whether material technology is going to save the built environment.

Following in the footsteps of Peter Cook in the Seventies, Armstrong works in the field of experimental architecture and, more specifically, building materials that can repair themselves.

She says: 'What I am getting at is that matter possesses some life-like qualities that we can apply in ways that opens up new ways for engaging with the built environment.

'We're already "there" working with living things inside our buildings. Construction company Arup only opened its BIQ house to the public recently. This is a set of apartments that has a living facade that contains water, which houses algae - or little green cows - plant-like cellular systems that munch on carbon dioxide and sunlight to turn this into biomass, which is then harvested, dried and burned back inside the building to offset energy use.'

At Central St Martins, researcher, designer and curator Carole Collet is exploring biological principles and living technology through design. One of her most prominent projects was Biolace, in which she genetically controlled plants to make lace while producing food, part of a process Collett calls biofacture. So could we reach a point where we get blackberries from the same starting point garments or textiles? She says: 'This is a post-2050 design scenario as we are encouraged to address a looming ecological crisis caused by resource shortages and overpopulation. If plants could be designed to replace textile machinery while providing food, this presents a radical stride.' The Deep Nocturne Corian bar at the Tincan pop restaurant.

Dutchman Daan Roosegarde is another pioneer, pushing material boundaries. Smart Highway is one of the artist's most recent projects. Its goal is to make smart roads using light, energy and road signs to interact with traffic. Here lines of light charge in the day and glow for up to eight hours at night. In a neat bit of historical referencing the thousands of twinkling stones in the Van-Gogh-Roosegaarde path are designed to resemble the painter's Starry Night work, and is built in the city of Neunen where Van Gogh once lived.

Moving indoors, another of his projects is the sustainable dance floor, an interactive dance floor that generates electricity through being danced on and installed in Club Watt in Rotterdam. Says Roosegaarde: 'We believe sustainability is about doing more, instead of less. Via smart technology a sensual and interactive environment is created in which dancers are engaged in a sustainable experience.' Interactive flooring seems to be having a moment. Desso and Philips recently partnered up to develop the pioneering Luminous Carpets concept. Videos, info graphics, and logos can all be displayed underfoot and changed at the click of a button. It can also provide wayfinding information, business news or point out emergency exits. One of its first practical applications was at Bild, a leading German media brand. 'We knew this was ideal for the entrance of our future newsroom,' says Bild chief editor Kai Diekman. 'Our main goal was to create a new space that would fully integrate BILD print and online operations.' The Luminous Carpet here displays the live newsfeed on the floor through an RSS feed.

Surface specialist DuPont has long been a science-led company, with its Corian product regarded as the gold standard in terms of solid-surface materials. Whereas once it was any colour as long as it was white, now specifiers can enjoy six new brown shades thanks to DuPont's Deep Colour Technology, an FX Award nominee. This follows on from the launch of several blacks, which were used in the temporary Tincan restaurant by AL_A. Says AL_A founder Amanda Levete: 'We can't come in and paint things black; we have to do something a bit special and the new deep black of Corian made an absolutely perfect backdrop.'

While Hi-Macs understandably keeps its cards close to its chest on exactly how it does it, the dark solid-surface options that are durable, easier to thermo form, seam and finish, and with colours such as Deep Mink with hues of green and brown and Deep Bedrock with its flecks of golden tan, black and ivory, it's a pretty design-led product too.

Further shades of grey are coming this year. DuPont has also teamed up with Power Matters Alliance to allow for Corian surfaces to be integrated with wireless-charging capability.

Using a wireless dongle plug-in, smartphones can be charged on a hotspot on the Corian surface. This was also in evidence at the Deep Nocturne Corian bar at the Tincan restaurant. Snook Architects specified Heradesign from Knauf to help transform a dated Eighties' office block into an aspirational working environment for a firm of solicitors. Neil Dawson of Snook says: 'We wanted an alternative to the traditional suspended ceiling. Heradesign ceilings are clever because, although a panelled system, the concealed grid disguises the fact that it is suspended (particularly with the nice chamfer detail on the edge of each panel). Moreover, their natural colour and size softens the feel of the space.'

Another household name in surface finishes, Dulux has also had its boffins at work when it came to the newly launched Chromalock. Dr Thomas Curwen, research scientist at Dulux says: 'Chromalock is the result of combining our fundamental understanding of paint film formation with our in-house polymer technology to deliver paints with excellent durability. 'Essentially Chromalock makes paint particles stick together better so the freshly painted look remains for longer.'

The world Expo in Milan, which features 147 countries and organisations, is where technology, construction architecture and design collide, and is the place where some material innovations can be found too. These include the Italian pavilion, one of the few permanent structures of the huge Expo space on the outskirts of Milan. Here, Rome-based architecture practice Nemesi and Partners has proposed a 13,000 sq m urban forest. This will be enveloped by a six-storey lattice structure made from 900 panels of i.active BIODYNAMIC cement that captures air pollutants before converting them into inert salts. As well as purifying the atmosphere the pavilion will also generate energy through the inclusion of photovoltaic glass.

Rachel Armstrong concludes: 'I don't know about material technology saving the built environment; that's like saying we've "solved" the city. But experimentation will allow us to shape new toolsets for the construction of spatial programs and design tactics that potentially share many common features with the biological realm - without being biology. This is interesting as it opens up a broader palette for design than currently exists and enables us to see new opportunities within the urban landscape.'