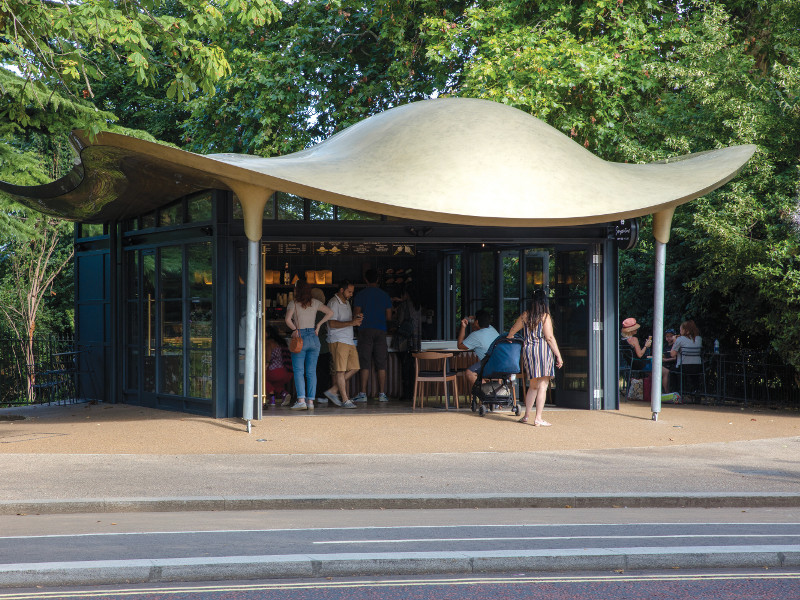 Mizzi Studio has just finished its sculptural coffee house for Hyde Park in London to complete its ‘fleet of kiosks’ across the Royal Parks. The Serpentine Coffee House is the largest of the structures, and the first with internal seating. As Mizzi explains, the roof is designed to look like a stingray moving through water, as if having taken flight from the Serpentine Lake behind it. The glass structure below is inspired by the traditional Japanese tea house – calm, simple pavilions often situated within gardens.The concept has been altered to feature transparent walls, while optimal weight distribution minimises the need for support points, allowing the canopy to ‘float’ while visitors below can enjoy the backdrop of Hyde Park. The 11 x 9m fluid canopy required close collaboration with Arup engineers and manufacturer mouldCAM to develop its semi-monocoque structural external skin, which is reinforced with carbon and glass fibre. This was manufactured using a large-format five-axis CNC milling machine. Alongside this state-of-the art technology Mizzi introduces a hand-feel: the canopy has been hand-painted to give an aged-brass finish – you can even see the finger-marks – while the underside is textured with snakeskin-inspired dimples, described by Jonathan Mizzi, the Maltese-British founder of Mizzi Studio, as ‘the glistening reptilian underbelly’.

The cafe and kiosks are run by Colicci, a family-grown business established in 1982. The other sites across the parks vary from steambent oak structures to a flagship brass horseshoe kiosk that will sit in front of Buckingham Palace. The series of kiosks will be completed this autumn. Maich Swift Architects’ proposal has won the third Antepavilion commission to build a temporary structure on a rooftop in Haggerston, London. The name, the Potemkin Theatre, references the faux villages erected by Grigory Potemkin to make Russia appear prosperous to his lover Catherine the Great. From one side the three-storey building appears flat (and visually references Monsieur Hulot’s house in Jacques Tati’s Mon Oncle) while the opposite side reveals open galleries. Here there is a rooftop theatre and cinema, activating the site with a programme of public events until the end of the month.

On 9 October 2019, from 12-9pm, the Furniture Makers’ Company holds its annual Young Furniture Makers exhibition. Open to students from GCSE through to post-graduate level as well as young professionals, the event is a chance for young makers to show off their work to the industry, and be in with a chance of winning a number of prizes, including the Young Furniture Makers Bespoke Award, design and innovation awards, School Design prizes, and the Blum Best in Show Prize.

Adding to its US presence, Camira Group has acquired San Francisco-based Luna Textiles. Founded in 1994 by Anna Hernandez, Luna was known for its portfolio of distinctive textiles for commercial interiors and a reputation for whimsical, fashion-influenced marketing strategies. Hernandez passed away in 2016; in her honour, an undisclosed sum is being donated to the IIDA Foundation’s Anna Hernandez/Luna Textiles Visionary Award, which recognises and supports female business owners in the industry.

César Pelli, the Argentine-born architect, has died at the age of 92. Pelli was known for skyscrapers such as the twin-spired Petronas Towers in Kuala Lumpur (at the time, the tallest in the world); One Canada Square in London’s Canary Wharf; and the Pacific Design Center in Hollywood. Early projects with the Finnish architect Eero Saarinen established his name, and he then went on to win multiple awards, including the AIA Gold Medal in 1995, while he also served as the dean of the Yale School of Architecture. He is survived by his two sons: Rafael (partner at Pelli Clarke Pelli) and Denis Pelli.

My Work Booth launches in Birmingham

My Work Booth offers rentable meeting rooms in public spaces booked and accessed using an app. The first two booths will be located in key Birmingham retail locations for a six-week trial: Grand Central Mall above New Street Station and the Bullring. Users can select the date, time and duration of their booking, starting at £12 for 15 minutes. Until 24 November 2019, the Vitra Design Museum, in Weil am Rhein, Germany, presents a solo exhibition from critical designer and artist Alexandra Daisy Ginsberg. As design discourse embraces ideas of biotechnology the museum saw the importance of displaying her work. With an interest in design’s premise of ‘making things better’, Ginsberg casts a critical eye on the idea of for and by whom is this ‘better’ designed in synthetic biology. The emerging technoscience – the focus of her work and this exhibition – might be more simply put as the design of living things. Trained in architecture and interaction design, Ginsberg has been interested in synthetic biology since learning about it as a student in 2008, and in the intervening years has collaborated with synthetic biologists while encountering the many associated political, cultural, economic and technological implications of the field. The exhibition presents six projects developed in collaboration with experts from different fields between 2009 and 2015, to offer different narratives that might lie behind the design of ‘Better Nature’. They include man-made companion species to support endangered animals and plants; an imagined future of genetically engineered plants capable of producing everyday consumer goods; and bacteria engineered to make biodegradable plastics and genetically modified bacteria that can diagnose disease when ingested.

Two new projects from 2019 are also on show here: Resurrecting the Sublime, where visitors can smell an extinct flower, and ‘The Wilding of Mars’, which proposes introducing plants to the planet rather than colonising and exploiting it with a human presence. Milan’s first robotic bar opened on the 26 July, offering a futuristic twist on the city’s aperitivo culture at a location overlooking the historic Duomo. The View by Makr Shakr Rooftop is the second such bar designed by MIT professor Carlo Ratti, the first having been a residency at the Barbican to accompany the exhibition AI: More than Human. The robotic arms in action display advanced technology and Italian craftsmanship, impressing with precise but ‘dance-like movements’, swiftly choosing from 150 bottles to make up classics, cocktails from reknowned bar staff across the world, and guests’ own custom drinks – all ordered via an app.

Future Designs has launched a new competition, Lightography, for Instagram photography. The brief asks that there be no manufactured light interference and only natural light used, and that photos must be taken on mobile phones. The judging panel includes Gareth Gardner, design photographer; Jane Wells of The Children’s Trust; John McCalllion from Multiplex; tp bennett’s Julian Sharpe; Phil Hutchinson of BDG Architecture + Design; Mark Ridler of BDP, and our very own Theresa Dowling, editor of FX.

The architect Cristiano Toraldo di Francia, best-known for co-founding radical Sixties and Seventies collective Superstudio, has passed away at the age of 78. Superstudio was hugely prolific in ideas if not buildings, calling into question working methods of design and architecture and proposing something radically new. After Superstudio’s demise, as well as teaching, his solo work included Florence’s Statuto Railway Station and the Livorno waterfront.

Gensler has unveiled a design for a temporary place of worship while the recently devastated 850-year-old Notre Dame cathedral is being restored. No permanent plans have been agreed for the restoration of Notre Dame and its lost spire, but Gensler’s temporary proposal is for a translucent structure – emphasising its ethereal qualities – using translucent polycarbonate walls and a roof of ETFE cushions. Following the dimensions of the cathedral, the temporary space also references its Gothic forms and ‘structural rhythms’. Moveable panels behind the altar allow for a view of Notre Dame, while other panels open the space up for performances and markets. Gensler describes it as a ‘humble space’ to serve the community while the cathedral is restored.

Awarded for the creative use of Spanish tiles, the 18th Tile of Spain Awards has a prize fund of €39,000 for three categories: Architecture, Interior Design and Final Degree Project. Projects can be anywhere but must make significant use of Spanish tiles. Grimshaw’s Camden Sainsbury’s Superstore becomes the first purposebuilt supermarket to receive a Grade II listing. The London supermarket is part of the Grand Union Complex built on a brownfield industrial site in Camden, which also includes 10 houses and two flats that border the neighbouring Grand Union Canal. As an example of the high-tech style, built between 1968 and 1988, both the supermarket and housing (a rare example of high-tech residential) have received the listing, while the accompanying creche has not. The bespoke building was a number of projects the Sainsbury family commissioned at the time, such as the Sainsbury Centre at the University of East Anglia, Norwich, and the Sainsbury Wing at the National Gallery (by Foster + Partners and Venturi Scott Brown Associates, respectively). The superstore is their most significant retail commission. An open-plan shop floor with curved trusses sits between two cantilevered double-height volumes providing ancillary accommodation. At street level the glazing is set back, while the exposed steel frame and aluminium cladding above is designed at a scale that matches the grand Georgian terraces opposite. U+I has secured planning permission from the London Borough of Hillingdon for the regeneration of the Old Vinyl Factory’s Powerhouse in Hayes. U+I is developing a number of other sites for Plus X across London, Brighton and Manchester. This new space for Plus X will be transformed into a 29,000 sq ft innovation hub. The original building is a 1907 power-generating plant for EMI’s global manufacturing headquarters. The new building and timber extension is designed by architects Pilbrow & Partners, while U+I’s development of the Old Vinyl Factory site includes 642 new homes, 550,000 sq ft of office space, an academy school, and retail and leisure facilities. The V&A Museum has acquired a series of objects documenting the global project of Extinction Rebellion (XR), the global activist group calling for urgent action on climate change via peaceful protest. The objects have been collected for the V&A’s Rapid Response Collection, which it started in 2014 to quickly acquire and display design objects ‘that address questions of social, political, technological an economic change’.

Recognising the role of design in XR’s work, the museum’s acquisition of the objects places them in a lineage of designing for protest. XR has embraced the power of design to create an impactful and recognisable visual identity across the globe. It has strong graphic symbols and established design principles for a coherent aesthetic, with bright signature colours and woodblock prints.

Significantly, XR has also used open-source design methods to create and share artwork, such as the open-source Extinction Symbol created by street artist ESP in 2011 and adopted by XR in 2018, which can be downloaded for free online. Digital acquisitions include the digital file of the Extinction Symbol as well as the website where it is available to download, and a digital file outlining XR’s open-source design programme, which provides its graphic materials. On the physical side there is the first printed pamphlet issued by the XR group with its Declaration of Rebellion; printing blocks of the logotype and the symbol; a green, blue and pink flag designed to stand out in crowds; six screen-printed patches featuring XR’s slogans; and a child’s high-vis jacket for the V&A’s Museum of Childhood. Denise Scott Brown will receive a Lifetime Achievement Award from the Lisbon Architecture Triennale. She is best known for her architectural writing – her first book, Learning from Las Vegas, co-authored with her partner Robert Venturi in 1972, is a landmark text looking at the symbolism of the 20th century city. In practice, Scott Brown was prolific in urban planning and advised on the development of the World Trade Centre, but often was not recognised for projects done in collaboration with Venturi. She will receive an artwork by artist Leonor Antunes.