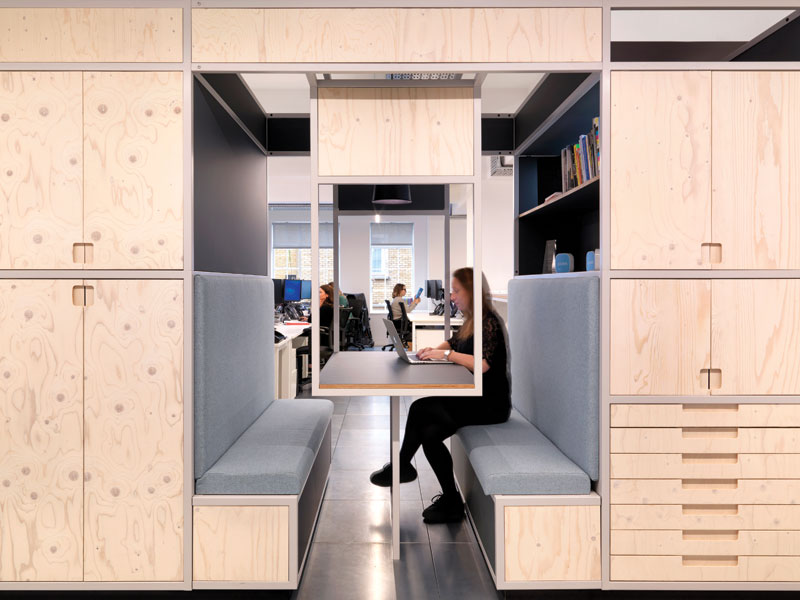 A 40m-long inhabited wall is the focus of Threefold Architects’ new Covent Garden workspace for housing developer Pocket Living. Creating an ‘active threshold’ that unites and separates the public and private sides of the office, the materials used reflect the company’s own ethos of modest and affordable living, utilising Nordic white-stained spruce plywood, grey structural steel framework and matt midnight-blue laminate for alcoves, display tops and counters – cost-effective and hard-wearing. The wall houses a private meeting room at one end, more open spaces for informal team and solo working, wellness rooms, breakout and canteen spaces, and cycle storage. Vistas open up between the two sides and towards the cityscape seen through the windows.

Introduced at Salone del Mobile in Milan this year, Panasonic Design has launched Vitrine, seemingly just a glass cabinet with a simple wooden frame, that transforms when switched on into an OLED display. To allow technology to integrate and blend into interior space the technical components are hidden in the frame, and the screen itself appears as a pane of glass. This prototype results from a two-year R&D project with furniture brand Vitra and Scandinavian designer Daniel Rybakken. Rybakken said: ‘The model carefully balances art and design. As a screen it no longer dictates its placement nor its role in the living space. The dominating large black surface is instead transformed into something that can highlight what’s behind, what’s displayed or nothing at all.’ To celebrate 25 years of practice, Sarah Wigglesworth Architects has announced its artist-in-residence programme, selecting British artist and academic Becky Shaw from around 150 applicants. As Sarah Wigglesworth explained: ‘We were immediately impressed with Becky’s poetic approach to what is traditionally con sidered as the purely practical. For example we loved her recent work exploring the emotional attachment of the citizens of Calgary to their water infrastructure….’

Shaw is known for her time-based works that explore the relationship between the individual and the social – ever relevant questions in design discourse. Other public events to celebrate the practice’s 25th year include an education roundtable, open studio, cycle tour and retrospective exhibition.

Mjösa Tower, in northern Norway, by Voll Arkitekter, is the world’s tallest wooden building to date at 18 floors and 84.5m tall. Both ‘skeleton’ and ‘skin’ are made of wood, consisting of glulam columns, beams and diagonal members, with lift shafts and staircases made of CLT. Prefabricated wooden elements and the lightness of materials meant that the structure could grow very quickly – at a rate of almost one floor a week. The building is mixed-use, with housing and office space.

During a period of growth for Manchester-based architecture practice 74, Bianca Yousef has been appointed an associate. After four years at the firm, previously working as a senior interior designer on a number of award-winning projects, her new role will see her take on increased responsibility in project-running and resourcing.

EGGER has won an award for its apprenticeship scheme at the North East Business Awards. More than 10 per cent of the workforce is or has been an EGGER apprentice, and 60 have completed the programme at its Hexham plant since 2004. The furniture manufacturer was commended for its close work with the local community, schools and universities for apprenticeships that cover engineering, manufacturing and administration, and offers tailored training, mentoring and further studies as well as long-term opportunities.

With a 21:12 female to male ratio, and 50 per cent of its staff from ethnically diverse backgrounds, workspace creator Halkin has been awarded for its work in promoting workplace diversity with the Hubble Office of the Future Awards. An all-female panel selected Halkin for co-working spaces with creches and was impressed by features such as a prayer room at its Paris Gardens Centre. Varun Bhanot, head of PR at Hubble said: [It’s a] unique feature which was not seen in many other spaces.’

Artist and designer Steuart Padwick has redesigned the Nunnery Cafe for charity Bow Arts, a popular hub for the local community and artists. Adjacent to the Nunnery gallery, the cafe’s interiors feature bespoke designs for both furniture and lighting, all created by Padwick. The colour scheme of four contemporary ‘Nunnery colours’ was inspired by the gallery’s original Victorian mosaic floor tiles, using custom paint colours created with sponsor Dulux. Working with a limited budget of only £3,000 from the Bow Arts and a time-frame of only six weeks, Padwick had to be resourceful in order to realise his signature playful and inviting designs. The interiors used low-cost and environmentally friendly layered-paper drums as bases for stools and tables, while shelving, a curved bar and table tops were made of birch plywood provided by Galliford Try, and finished simply with clear varnish.

A highlight of the design is the pendant lights, made from orbs and coloured discs. These too were custom-made by Padwick with parts provided by LEDVANCE and Astro Lighting. At the 10-year anniversary of Clerkenwell Design Week, KI, one of the world’s largest manufacturers of workplace and education furniture, will open a pop-up showroom in the stunning Paxton Locher House – worth a visit in itself to see its retractable glass ceiling. With a flagship party on 22 May, KI will hold a number of events and workshops on ‘Achievable, affordable co-design’ from KI design director Alex Gifford, Bute Fabrics & Natasha Marshall, and a workshop with designer and recent RCA graduate Freyja Sewell.