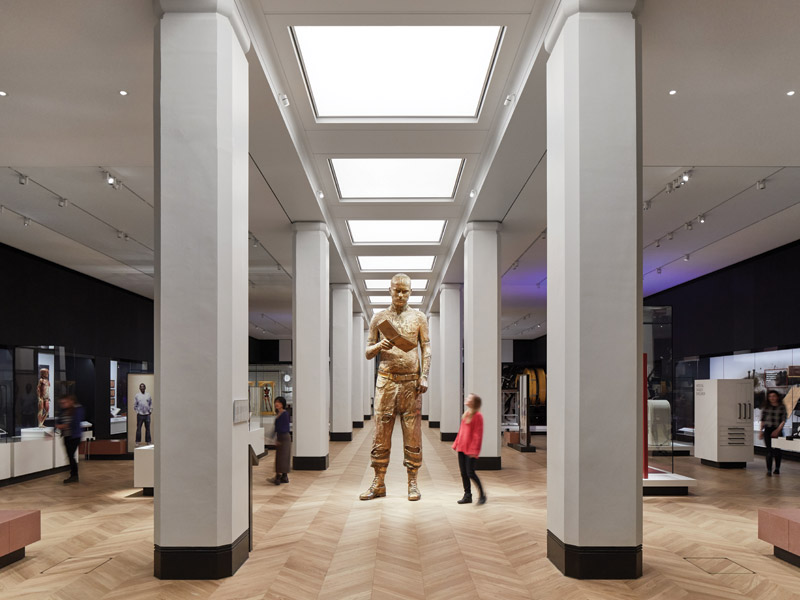 Architecture firm WilkinsonEyre has created the largest gallery space in the world dedicated to telling the story of medicine for the Science Museum in London, with 3,000 sq m of permanent display space containing more than 3,000 exhibits.

Located on the museum’s first floor, Medicine: The Wellcome Galleries draws on objects from the collections of Henry Wellcome and the Science Museum Group, with displays across five distinct themes: Medicine & Bodies, Exploring Medicine, Medicine and Communities, Medicine and Treatments, and Faith, Hope and Fear. The old galleries were half the size and found on the fourth and fifth floors. The opening of the new galleries marks the end of phase 1 of the museum’s masterplan.

As well as astounding objects, features incorporated into the design include a 1911 pharmacy shop front and interior, and a padded cell dating from the 1930s, with a replica alongside that visitors can enter. Artworks from Marc Quinn, Eleanor Crook, Studio Roso and Sian Davey complement the exhibits.

The elegant galleries cross different spaces, with light-filled galleries in the middle, and more intimate spaces either side. A prominent lift bank is disguised within a glass and steel cabinet of curiosities containing 1,000 varied objects. In Faith, Hope and Fear, purple surfaces and dramatically lit statues of icons create a potent space to consider illness and mortality.
wilkinsoneyre.com

Mark Major, principal of Speirs + Major, has been appointed Master of the RSA’s Faculty of Royal Designers for Industry. The appointment was made during a ceremony on 28 November. Major has been a Royal Designer for Industry since 2012, is a fellow of the International Association of Lighting Designs, a fellow of the Royal Incorporation of Architects in Scotland, and a corporate member of the Royal Institute of British Architects.
thersa.org

British design practice Liqui Group is launching in North America, setting up a studio and production in LA. Known for coffee shop design, the practice has clients in Saudi Arabia, the UK and the Netherlands. Founder Cameron Fry says: ‘The coffee industry in Southern California is moving at a real pace, and as one of the leaders in the sector it seems silly not to embark in this new venture.’
liquigroup.com

Regeneration specialist U+I has announced it is backing a series of high-tech innovation hubs launched by a new business called Plus X. Sited in London, Brighton, Birmingham, Manchester and Oxford, the hubs will support entrepreneurs, start-ups and stimulate economic activity on brownfield developments. Taking a 50 per cent stake in Plus X, U+I is investing £30m in the Brighton and London locations.
uandiplc.com

Haworth Tompkins has had its plans approved by Camden Council for the £14.5m redevelopment of the Warburg Institute, one of London’s leading cultural and academic institutions. The project covers refurbishment and extension of the existing building, to allow for library expansion, plus also addresses infrastructure issues and facilitates a public-facing programme.
haworthtompkins.com

CPMG Architects has announced the promotion of Ruth Evans and Jason Evans to associate positions. Ruth will head up a team delivering high-spec interior design schemes, as well as growing the company’s client base. Jason has worked in the education, commercial, residential, MoD, and transport sectors.
cpmg-architects.com For the third year, Squire & Partners has launched its Winter Windows scheme, where it partners with local schools to create window displays. This year, The Department Store in Brixton will be lit-up with designs from the pupils of Landsdowne School, a special needs secondary school in Stockwell, London. After two workshops with the architects, the children created designs with coloured pipe cleaners. The resulting window displays, created with LED lights, feature reindeer antlers, fairy wings, microphones and a rainbow. The display will be up from December and through January, after being launched on 29 December by Lambeth deputy mayor, artist Philip Normal.
squireandpartners.com The British carpet maker Brintons has launched a competition with FX Magazine to design a commercial product, suitable for use in the hospitality market, that it will manufacture at its factory

Brief: Through pattern and colour, can you represent and bring to life your own interpretation and relationship with the word ‘ritual’?

The word can represent different meanings to different people – culture, history, spirituality and traditions are often connected to the idea of a ritual.

Your idea could, for example, be related to a simple everyday ritual, a sequence of words, gestures, a recurring behaviour, or even a treasured object.

Entry requirements: Please select one of the following options to develop:

– Use a maximum of 12 colours
– Optional: Include a mood board of your ideas OR a brief summary of your concept
– Your idea must be uploaded via a Jpeg file

For all competition information and to enter, go to: brintons.net/fx-competition London-based designer Emily Forgot has designed the Assembly Series of artworks to celebrate the 10-year anniversary of furniture manufacturer Very Good & Proper (VG&P). Inspired by the brand’s ethos of ‘simple yet playful furniture’, its processes, techniques and materials, and Forgot’s own processes and influences, the assemblages sit between 2D and 3D, and are made of removable parts made of powder-coated aluminium and oak. The three designs find inspiration in the architecture of post-war schools, which links to VG&P’s first-ever product, the Canteen Chair that was inspired by the classic British school chair of the post-war period.
emilyforgot.co.uk | verygoodandproper.co.uk