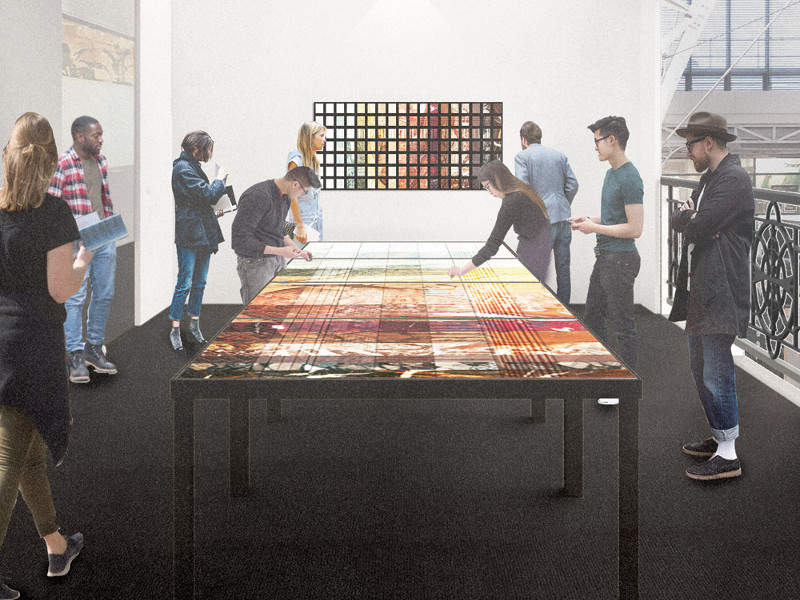 Squire & Partners has been invited by the trade association Stone Federation to design the Stone Knowledge Hub at the Surface Design Show (SDS) 2020. A regular feature for the association’s Stone Gallery, the hub showcases innovations in the use and application of stone in the built environment.

The bespoke installation is made in collaboration with Italian furniture maker Lema SpA and natural stone supplier SolidNature, while the display is illuminated by independent lighting specialist Atrium.

SolidNature collaborated with Squire & Partners to curate a collection of samples provided by SolidNature and three British suppliers. Showcasing the variety of natural stone on offer in the UK, from marble, onyx and quartzite to slate and limestone, the display creates ‘a tapestry’ rich in colour – ranging from off-whites, greens, yellows and pinks to red, browns and blacks – and patterns and texture, with seven different finishes including polished, honed, sandblasted, leathered, corrugated, ribbed and pillowed.

With sustainability in mind, photographic postcards with supplier details are available for visitors to take away instead of bulky, heavy and wasteful stone samples, while following SolidNature’s sustainability policy a third of its samples are created from off-cuts.

The hub will be open throughout SDS, from 11–13 February at the Business Design Centre in London.
surfacedesignshow.com

Entries are now open for the carpet design competition that British carpet maker Brintons has launched with FX Magazine.

Entrants are invited to design a commercial product for use in the hospitality market; a sample of the winning design will be made by Brintons in its factory, while cash prizes range from £500 to £100.

The brief asks for personal interpretations of ‘ritual’ – often connected to culture, history, spirituality and traditions, it might also relate to an everyday ritual: a recurring behaviour, a gesture, a word or a treasured object.

The deadline is 17 April 2020. For all competition information and to enter, please visit: www.brintons.net/fx-competition

Hackney council has ordered the removal of two Antepavilion projects – 2019’s Potemkin Theatre by Maich Swift Architects, and 2017’s H-VAC by PUP Architects – for incongruity with surrounds and a resulting ‘loss of amenity’. Following this news, the 2020 edition of the Architecture Foundation’s annual commission asks for proposals for a floating pavilion on Regent’s Canal, as was seen in 2018, rather than a rooftop one.
antepavillion.org

Bisley has announced three appointments to its Group Board in the shape of Robin Bayliss, group sales director; Richard Costin, commercial director; and David Botterill, group finance director. On the appointments, John Atkin, CEO, said: ‘I am delighted to welcome Richard, Robin and David as Group Board members – their collective experience, expertise and leadership will enhance and strengthen Bisley to ensure the long-term sustainable future of the business.’
bisley.com

During January’s Consumer Electronics Show (CES), Toyota announced plans to build a prototype ‘city’ of the future at the base of Mount Fuji in Japan. Across a 175-acre site, Woven City will be a living laboratory for a fully connected ecosystem, powered entirely by hydrogen fuel cells. Toyota commissioned Bjarke Ingles of BIG to design Woven City, and also invites further collaboration from commercial and academic partners.
big.dk

On 25-28 February 2020, the biannual International Federation of Interior Architects/Designers (IFI) Congress and General Assembly will take place in Dubai at the Park Hyatt hotel. Organised in collaboration with the Association of Professional Interior Designers and hosted by the City of Dubai, UAE, the event hopes to bring the international design community to Dubai to discuss the theme ‘Design 2050 – Technology. Design. Education’. The event will feature the GAP Prize, given to an individual or collective that has made an outstanding international contribution to the fields of architecture and design.
ificongressdubai.com

The 2020 RIBA Honorary Fellowships – for individuals who have made outstanding contributions to architecture but who are not architects themselves – are awarded to Pam Alexander OBE, Jude Kelly OBE, professor Yoland Barnes, Sadie Morgan and Morag Myerscough. Alexander is a Chartered Geographer, a former policymaker and senior civil servant, and an influential member of national bodies English Heritage, Peabody Trust and the Design Council; Barnes is a pioneer in property research and is now professor of real estate at UCL; Kelly is the founder of the Women of the World Festival, confronting gender injustice worldwide; Morgan is a founding director of dRMM and recently founded the Quality of Life Foundation, an independent body working in the built environment; while Myerscough was recognised for the contribution her colourful and patterned work has made to educational, medical and urban environments over 25 years.
architecture.com

New president and vice-president for FEMB

Michele Falcone has been elected to president of the European Office Furniture Federation (FEMB) for 2020 and 2021. Falcone previously held the position in 2010 and 2011, and has 30 years of experience in the furniture sector. Supporting Falcone as vice-president is Ruben Fernández, commercial director of the Spanish manufacturer Grupo Fora 5 and an engineer by training.
femb.org

Students from IED Barcelona Design School, Esade, and the Universitat Politecnica de Catalunya BarcelonaTech (UPC) were invited to CERN, the European Organisation for Nuclear Research, for the sixth edition of Challenge Based Innovation. Based on UN sustainable development Goal 11, focusing on sustainable cities and communities, they were challenged to look at accessibility, a transition to new modes of transport and inclusive urban planning, pollution, and the allocation of urban space. The 37 students from 12 nations worked with CERN’s facilities and scientists before presenting prototype solutions in December. Projects included a flood evacuation system using AR to project risks to users, while another was a guide for rental bicycles using data to suggest less-polluted routes.

Bennetts Associates has completed the Advanced Product Creation Centre for Jaguar Land Rover in Gaydon, Warwickshire. The £500m project provides more than 50,000 sq m for the Jaguar Design Studio, moved from its birthplace of Coventry to join its sister brand’s studio. The new facilities include offices, a restaurant, a 400-seat hall and a visitor building.

Sustainability was a priority, aligning the new centre with Jaguar Land Rover’s ‘Destination Zero’ mission, where it aims to take a leading role in improving the automotive industry’s impact on the environment and society. Above a supporting steel ‘super-grid’ the building has a timber roof – one of Europe’s largest – and the large oversailing rooflights provide natural light while spaces are also naturally ventilated.

Located on a former WW2 airbase, the old runways have been incorporated into the plan of the new structure.

Beyond the building, landscaping has enhanced the existing facilities for the benefit of staff, while also helping the centre to blend into the rolling Warwickshire countryside. New features include a lake, and green space where there was previously car parking. 70,000 trees have been planted over eight years on four miles of newly created earth banks, designed to reduce noise and provide privacy for secret prototypes.

VitrA Bathrooms is opening a 5,600 sq ft flagship showroom in London’s Clerkenwell. The location will provide a space for its design-focused bathroom products, including a ground-floor area to showcase the designer ranges made in collaboration with Ross Lovegrove, Sebastian Conran, Terri Pecora, Claudio Bellini and Arik Levy. On the lower ground floor a dedicated specification space will be equipped with elements from tiles to flush plates, and will offer VR headsets and a 4D theatre.

VitrA has previously run a series of talks with leading architects in collaboration with RIBA; with the new flagship it hopes to serve the architecture and design community with further talks, exhibitions and workshops.
vitra.co.uk