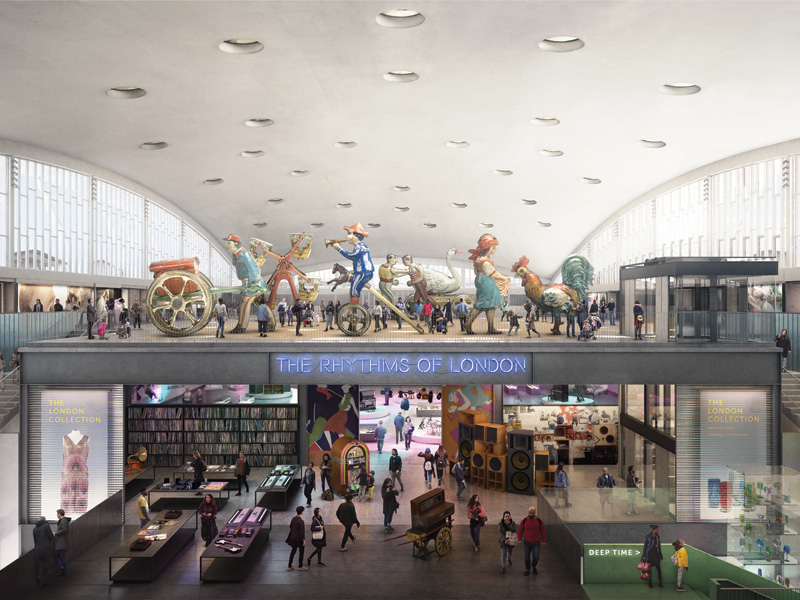 Stanton Williams, Asif Khan and Julian Harrap Architects’ designs for the Museum of London’s new West Smithfield location have been publicly revealed. The derelict historic buildings of Farringdon’s West Smithfield market will be preserved and turned into a ‘24-hour cultural destination’, and as Paul Williams, principal director of Stanton Williams, describes, ‘a living museum for the 21st century’.  The plans reveal an ambitious scheme: atmospheric exhibition spaces that make use of the buildings both above and below ground, an enhanced visitor experience to better engage the public in the museum’s excellent collection, and a world-class learning centre to realise the museum’s aim to reach every London schoolchild. Visitors can see and comment on the plans at the new site and the Museum of London’s existing London Wall location. The updated budget is £323m, in response to detailed studies on the condition of the 19th century buildings and the ambition of the design. The planning application is due before the end of this year, with an expected opening date of 2024. The World Architecture Festival, taking place 4-6 December in Amsterdam, has just announced its shortlist. There are 534 shortlisted projects from more than 70 countries and the list includes: Helsinki Central Library Oodi by ALA Architects, Safdie Architects’ eco airport in Singapore, the National Kaohsiung Centre for the Arts by Mecanoo, Solstice on the Park by Studio Gang, and the controversial Vessel by Heatherwick Studio.

Bhupinder Singh Chawla and Craig Sheach have both been promoted to the role of partner for UK architecture firm PRP. Both are from the London studio, and have worked at PRP for 20 and six years respectively. Their promotion marks a period of high growth for the firm: the London studio has grown more than 25% in the past six months, and PRP has expanded its masterplanning and town regeneration capacities.

Speirs + Major’s charitable fund was founded to support students with the interest and potential to successfully enter the field of lighting design. The winners this year are Apoorva Jalindre and Merethe Granhus. Jalindre is completing her second Masters degree, in Architecture, Design and Health at the University of Michigan’s Taubman College of Architecture and Urban Planning. Granhus is studying for a Professional Diploma in Architecture (RIBA Part II) at the Sir John Cass School of Architecture, London Metropolitan University.

Flooring manufacturer and family business Bolon is celebrating 70 years of business. Focussing on its ‘curiosity and diversity over generations‘, the new collection Diversity celebrates the company’s embrace of plurality in its approach. Consisting of Bling, Buzz and Bouquet, the three designs are woven on jacquard looms using Bolon’s signature environmentally friendly, phthalate-free recycled materials.

Hyperform is a data-driven design tool that uses augmented reality to allow architects and planners to collaborate in virtual space. Created by digital studio Squint/Opera, BIG and UNStudio, multiple teams can access it in real time, immerse themselves at a 1:1 scale or interact with a scale model, and share maps, site images and data. The tool aims to reduce international travel and make the design process more efficient. Hyperform has been developed from a 2018 prototype after a period of testing by various architects.

Entries are now open for the next Surface Design Awards. In addition to the Interior and Exterior categories for each of the following – Commercial Building, Light + Surface, Housing, Public Building, Retail Building, Sustainable Surfaces and Temporary Structures – there are two new categories for 2020: Affordable Housing and Public Realm. The closing date for entries to this year’s competition is 27 September.

Situated on Lake Zurich, Le Corbusier’s final pavilion and last work was reopened on 11 May this year. The pavilion is run as a public museum by the Museum für Gestaltung Zürich on behalf of the city of Zurich. The colourful building is the only one of Le Corbusier’s made entirely from glass and steel, and is designed entirely according to his Modulor system: an anthropometric scale of proportions based on the human body and the golden ratio. The World Heritage Committee has announced the addition of Frank Lloyd Wright’s 20th century architecture to the UNESCO World Heritage List. Comprising eight of the American architect’s major works, this is a significant increase to the number of sites in the US, which previously amounted to only 24 of the roughly 1,000 sites on the list worldwide. Considered the most important 20th century American architect, Wright’s addition is not surprising, but the nomination was 15 years in the making and took considerable work and renomination after referral in 2015. The committee made the official decision at its meeting in Baku, Azerbaijan, this year. The works span 50 years of Wright’s career. The earliest is the Unity Temple, constructed in 1906-1909 in Oak Park, Illinois, and the latest is the Solomon R. Guggenheim Museum, constructed in 1956-1959 in New York. In between are the Frederick C. Robie House (constructed in 1910 in Chicago, Illinois), Taliesin (begun in 1911, Spring Green, Wisconsin), Hollyhock House (1918-1921, Los Angeles), Fallingwater (1936-1939, Mill Run, Pennsylvania), the Herbert and Katherine Jacobs House (1936-1937, Madison, Wisconsin), and Taliesin West (begun in 1938, Scottsdale, Arizona). The buildings represent a considerable contribution to 20th century modern architecture. Perhaps best-known is Fallingwater, but of great importance are the ‘Usonian homes’, of which the Jacobs House is considered the first. Built for only $5,000 for the young couple, it was designed to fit in with the natural surroundings and is considered a predecessor of the American ranch-style house. At New Designers, an annual event showcasing the UK’s design graduates, the top Design of the Year prize was awarded to Rimal Bhatt from the University of Hertfordshire. His design – a low-cost fire evacuation respirator mask combined with radio frequency technology that tracks people entering and leaving a building, and logs the numbers left inside – was developed following the Grenfell Tower tragedy of 2017. It was described by the judges as ‘a very simple solution to a very current issue’.