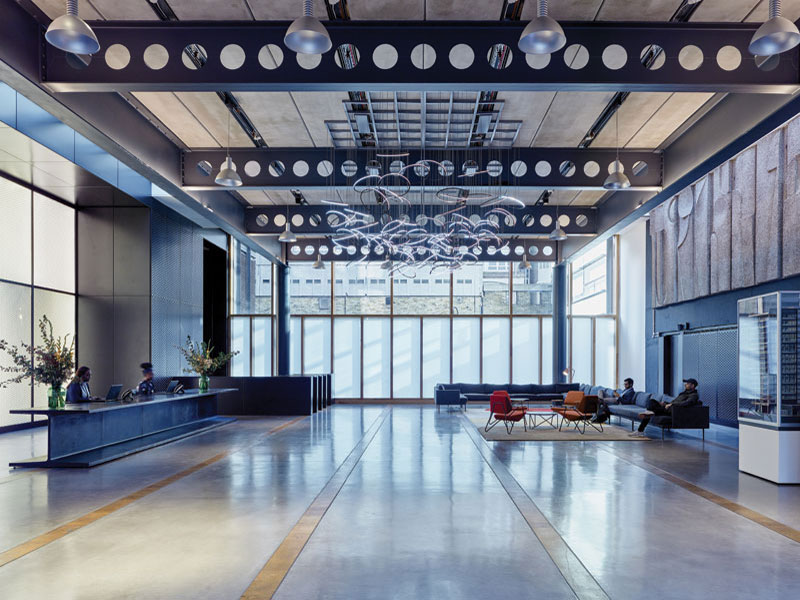 Phillip Turner, lead architect on The Bower, had been cycling past the site on which it stands for 15 years before working on the project. He remembers noticing the space and thinking of its potential; he describes it then as being ‘a bit of a dump’, with two dated buildings cornering a car park. Sitting on the corner of Old Street and City Road, just behind Tonkin Liu’s award-winning 2006 ‘Promenade of Light’ scheme, the two buildings were originally created in 1967 for British Telecom. There was the corporate office building on the street, and behind, the warehouse they used for printing telephone bills. In order to make the 450,000 sq ft office and public realm project a success, both client and architect felt it necessary to make a destination of the space. A retail street was introduced between the buildings where the car park previously stood, onto which the architects put the new entrance to the office space. The project was concerned with the ‘urban condition’: despite the prominence of the front building, Helical had been keen to to spend money on the public realm. Next, they directed their energy first on the back building, leaving the more prominent but more problematic tower building until afterwards. The architects felt this needed a new skin, having been reclad with a mirrored surface in 1980, but the back building, still retaining the original bricks, framed windows and distinct precast decorative cladding that once covered both buildings, could be left relatively unchanged externally – AHMM just ‘put new windows in, cleaned the frame up and fully insulated it.’ The back building fared better internally too; it was more solidly built, with higher ceilings, and benefited from the unusual feature of distinctive columns with large flared heads across the warehouse’s eight floors. While the columns are girthy on the lower, more load-bearing floors, as you ascend up the building, the shape becomes accentuated as the columns get increasingly narrow before angling out to the same large head. These factors, as well as the current desirability of warehouse buildings, made this now the more suitable of the two for a contemporary office environment, despite the front office having been built for this purpose. In terms of the interior materials palette, AHMM used the same design language across the site. This consisted of expanded metal lath in a couple of different scales, durbar plate, and diamond embossed panels (of these, some were demountable to conceal necessary equipment and others function as acoustic absorbers). The entrance flooring is Lazenby polished concrete, its expanse interrupted by borders of end-grain timber from Havwoods. Glazing with spruce mullions unites the ground floor of both buildings, that ‘softens and warms the retail and lounge areas that visitors first encounter’ according to Turner. The cafe area, just after the entrance, is furnished with comfortable seating, and Eames’ room dividers. The front building consists of the 14 original floors, now with expanded floor plates, as well as a new upward extension. The new floors feature high ceilings and near-panoramic views, but faced with the original floors, and unable to change the restricted ceiling height or move the double row of columns in the middle of the floorplate, the architects came up with a unique solution to open up the space. The architects hung a suspended extension front and back of the building, but rather than ‘being greedy’ and filling every floor, they persuaded the client to alternate with the extension into this space, therefore producing double-height spaces that connect two floors and bring light and space inwards. The double-height sections are staggered; on one side the floor looks up to a double height ceiling, while on the other side, the floor is set back creating a mezzanine level over the floor below. In the entrance space is an artwork of LED rings by Jason Bruges Studio. Credit: Tim Soar / AHMM

Whereas this interconnectivity between floors lends itself well to multi-storey lettings, the decision was made to allow the floors to be singularly let. Helical was nervous about potential tenants’ concerns over privacy, so as a solution, there is the option to attach a 1m louver out from the transom of the balcony wall, so the tenants below can ensure they are not overlooked.

The building is now 82 per cent let, and proving popular with its current occupiers such as luxury fashion retail platform Farfetch. They have used the space in what AHMM describes as an ‘ideal manner’, with ‘very successful’ interior design by Studio Fibre. Keen to remain in The Bower as their business expands, Farfetch wished to take more of the warehouse building, but as the other floors were already occupied, this provided an opportunity for AHMM and Helical to convince Farfetch to take space in the front building by showing the design thinking and potential common to both buildings. Convinced, Farfetch have decided to take three of the interlocking floors, uniting them further by planning a two-storey staircase on one side of the office linking the three levels. In terms of the interior materials palette, AHMM used the same design language across the site. Credit: Tim Soar / AHMM

In the joint entrance space between the two buildings is an artwork of LED rings by Jason Bruges Studio, which references a historic ‘bower’ of trees on the site and is meant ‘to appeal to [the] creative industries’ that occupy the local area. The area of course had a preexisting history: Phillip Turner believes in a sort of harmony between The Bower and the council estate beyond as contemporaneous buildings, and describes local pub, The Old Fountain, as perhaps the biggest success story overall – from back street pub, to ‘craft ale pub’ (via several years as a ‘site pub’) – a neat illustration for the regeneration at hand. Integrating into the area while making The Bower a destination itself, AHMM’s strategy considers the ‘placemaking’ that is demanded of workplace environments today.