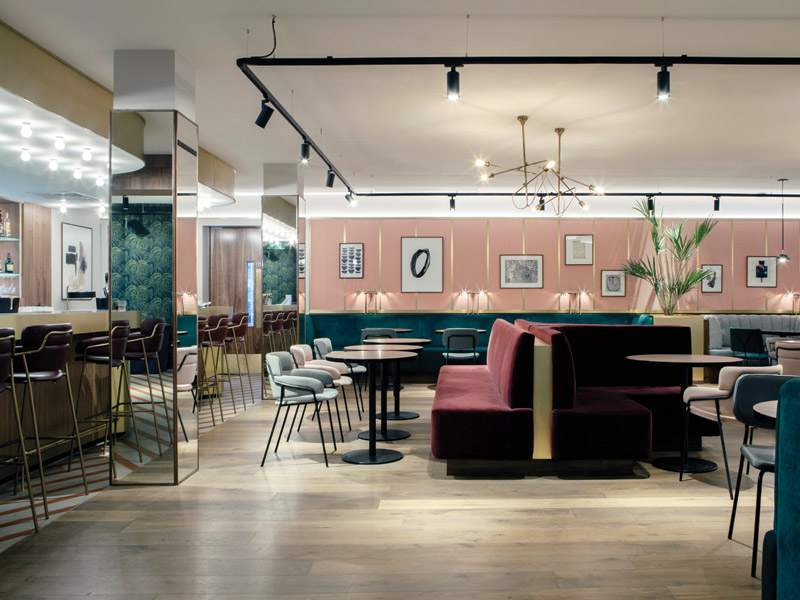 Adding a modern addition to Dublin’s historic Georgian Merrion Square, the hotel’s make-over has used Irish products and a new discrete cafe to make it a lively and welcome neighbour

Situated on a corner of Dublin’s Merrion Square, The Alex is a modern addition to the Georgian garden square, which brought life and prosperity to the Southside of the city after the Earl of Kildare had a home, Leinster House, built here in 1748.

The area is layered with different uses and styles from across its history, being constantly reincarnated from the Georgian townhouses of Ireland’s most wealthy, to a key industrial area complete with tramlines, and now as the Georgian cultural heart of the city and a sought-after address for office space. Although The Alex was only built in 1990, it is a part of the cultural landscape, and now this is has been reinforced by an interior refurbishment that draws on its rich historical context to make something new but considered.

A welcoming entrance to the hotel’s restaurant

The brief to designers at 21Spaces was to create something ‘playful and not too formal’. With this, 21Spaces has been able to inject character and energy into The Alex. The design alludes to the site’s former life with discreet details such as ticket tape running along the lift area, in reference to the defunct tramline adjacent to the building. This is complemented by a distinctly Fifties interior, steeped in modernism, which both celebrates the area’s unsung industrial history and offsets the background of Georgian Dublin.

The most palpable change 21Spaces has made is the spatial reconfiguration. Moving the entrance to the middle of the building enabled it to open up the hotel and flood the entrance spaces with natural daylight. The new Steam cafe welcomes everyone with its discreet entrance

In place of the hotel’s previous entrance, The Alex was afforded the space to open a standalone cafe, The Steam Café, to cater to the surrounding offices. The cafe offers something different to a usual hotel eating area – it is fastpaced, has a separate identity and puts the hotel on the map for the offices as something that is useful to them and their clients. The design of this new landmark employs natural materials with ash timber-clad walls and complementary ash lobby doors. The main focus of the space is a curved service counter, highlighted with brass skirting, which continues across the walls tying the space together.

The dead space created by the original corner entrance has become purposeful. This afforded space for a dedicated working area – satisfying the ever-increasing demand for hotdesking facilities. John Henry Boyle, founder and director of 21Spaces says: ‘The refurbishment of The Alex hotel could not have been better timed. The demand on a central location and the demographic shift following the relocation nearby of multinational companies such as Twitter’s European headquarters, has meant that since the redesign The Alex has become a busy and lively all-day destination’.

In realising a bespoke, detailed design, 21Spaces championed Irish designers. The two long desks in the cafe’s working area are crafted out of solid walnut by Abbey Upholstery in Belfast, while a perpendicular bookcase next to them was constructed on site from perforated polished steel panels, incorporating layers of LED lights, by local specialist Jade Metal. Bespoke rugs adorn the reception area, handmade by Rugs for Design, also a Dublin firm. In the hotel guest rooms, soft wool throws from Foxford Woollen Mill in County Mayo are draped over beds, which have leather headboards from Cork’s O’Donnell Furniture Makers. 21Spaces has recognised the fact that a hotel is not just that anymore. It is a cafe, a meeting place, a bar, a landmark. 21Spaces has built The Alex a new identity. It is obviously first and foremost a hotel and this is seen in Its open, welcoming reception desk, the traditional rack of newspapers suspended on walnut rods and its luxurious, relaxing guest rooms. But The Alex now offers something more. With its sleek, flexible working areas, private conference rooms and a standalone cafe, all in a distinguishable modern design, the hotel now provides for tourists, workers and locals alike. The result is a diverse offering, catering to the modern clientele in the heart of Georgian Dublin.

Rugs
Bespoke 21Spacesdesigned rugs made by Rugs by Design