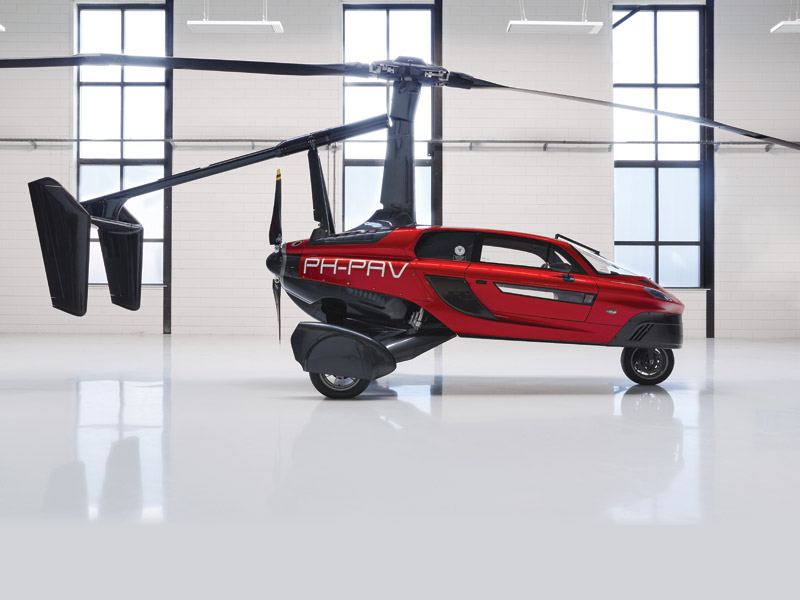 Say goodbye to sitting in traffic jams, as flying cars are on their way. From as early as next year, these vehicles — once the sole preserve of sci-fi films — will start to be rolled out. But what are the challenges — and will our city skies really be full of cars soon?

The long-held dream of flying cars is set to become reality next year. Really. In 2020, a petrol-powered, three-wheel, two-seat, gyroplane that can drive on regular roads and then fly up into the sky to avoid congestion will launch — the Dutch-born PAL-V Liberty is just going through the final stages of certification now — and many other associated electrically powered Vertical Take-Off and Landing taxis (eVTOLs) and passenger drones are set to follow. There are currently 130 electric flying vehicle projects underway around the world.

The idea for PAL-V came via co-founder John Bakker becoming frustrated about flying private planes that invariably had to depart from, and land at, inconvenient locations like runways. ‘The PAL-V allows our customers to fly-drive from door to door instead of from platform to platform,’ its spokesperson Joris Wolters says, ‘and it fits within existing [air and road] regulations, the most important factor in getting something to the market.’ At €499,000 (£429,000), PAL-V’s first flying car is not cheap and even its Liberty Sport follow-on model isn’t exactly priced for mainstream private mobility at €299,000 (£256,800). But Wolters says the business has also had interest from other types of customers, citing border control, military, police and ‘first response’ emergency use cases too.

The PAL-V Liberty, an eVTOL, is going through the final stages of certification now

Perhaps more exciting are the myriad electric small flying vehicle projects that could lead to everyday benefits to a larger cross-section of society through more affordable, ground congestion-beating short-hop flying taxis, and available for hire rather than outright purchase. Big money is being invested in these ideas and many of the development firms are far from just independent dreamers with capital.

Indeed, ex-NASA man and now Uber’s engineering director of aviation, Mark Moore, announced publicly in late 2018 that the taxi app firm is working on an eVTOL flying taxi service to operate by 2023, starting in the US cities of LA and Dallas. Uber has entered into partnerships with aircraft manufacturers including Aurora Flight Sciences (now a subsidiary of Boeing), Pipistrel Aircraft, Embraer, Bell and Karem Aircraft. Moore says their eVTOL will be able to fly at 150mph and reduce the current circa-80-minute car journey from LAX airport to downtown LA to 10 minutes. ‘Don’t imagine Star Wars’-style high-density starships above your head,’ Moore explained at the LA CoMotion conference in November 2018. ‘It will be scalable, but I see millions of air taxi trips between 2023 and 2028. Within 30 years I think it will reshape cities and change where people live and work.’ The trips are expected to be competitively priced in comparison to earth-based vehicular transport too, with Moore citing an Airbus Group helicopter service called Voom already operating in São Paulo, Brazil from hotel-top to airport for about €65 (£56) and taking 12 minutes rather than 120. As Moore enthused, ‘that’s a small price to pay compared to a car stuck in gridlock.’

The nascent eVTOL technology has many functional benefits over helicopter rides. As the vehicles typically have multiple electric rotors mounted above a passenger capsule — akin to a large drone carrying a few humans and a pilot — a few rotors can fail and yet the vehicle still fly. eVTOLs’ electric power makes them much quieter too — as Alex Zosel, co-founder of eVTOL company Volocopter, explains: ‘Our eVTOL is designed specifically for inner-city missions. It features an extremely stable flight, allowing it to manoeuvre micro turbulences around skyscrapers, thus offering a smooth ride. At a flight height of 100 metres it cannot be heard over the typical background noise of a city.’ Volocopter’s eVTOL is specifically designed for cities, with a flight height of 100m and the ability to manouevre around tall
towers

Zosel is convinced air taxis will be a mainstream means of transport in 15 years, similar to car-sharing services today: ‘We do not believe that air taxis will be owned privately like we own cars nowadays,’ he says. ‘But as a service, yes they will be mainstream in megacities, where going into the air is a sensible efficient addition to traditional traffic.’

eVTOLs are also cheaper to make, run and maintain, as Jörg Peter Müller, head of urban air mobility programs and strategy at aircraft manufacturing giant Airbus, points out. ‘Helicopters are complex machines, expensive to build, not built in big numbers and generate high operating costs,’ he begins when we speak. ‘A “flight-hour” for a helicopter costs $800–2000 (£606–1515) depending on its size. Spare parts are expensive and there is a lot of maintenance. eVTOLs have a very similar drivetrain and power requirements to a high-performance electric car. In the future they will provide very strong synergies which will help us bring down cost levels.’ For its part, Airbus has already shown the autonomous, electric, part-car part-drone, modular Pop.Up concept in conjunction with VW Group’s Italdesign at the 2017 Geneva Motorshow and a more advanced Audi-badged version called Pop.Up Next in 2018. The electric city commuter concept could be 10 years away from being production- and cost-viable, but it shows that the big transport players are taking the idea of flying cars seriously.

Another huge name in aerospace, Rolls-Royce, is working on alternative propulsion systems and also two flying concept vehicles — both shown at the 2018 Farnborough International Air Show (and one designed with luxury carmaker Aston Martin). ‘Rolls-Royce has pioneered every significant development of the aviation industry and it is only natural that we play our part in this exciting next step,’ says Sarah E Jones, a spokesperson for the company. ‘We also bring unparalleled experience in VTOL aviation through our involvement with the Harrier, the F35 and the V22 aircraft. Our interest is predominantly in the power and propulsion system. [But] we believe that as these new aircraft require an even greater degree of integration between the propulsion system and the airframe than before, they present a need and an opportunity, for us to build capability at vehicle level.’ The tech behind both Rolls-Royce concepts is called ‘electrically-enabled distributed propulsion’. ‘We use a gas turbine as the primary source of power,’ adds Jones. ‘However, instead of driving a propeller or fan, the engine drives a generator providing electrical power. This is distributed around the aircraft to motors that provide highly controllable thrust. Like in a hybrid car, we can also support the engine with power from a battery during short-term or transient operation, such as take-off or landing. This gives us valuable back-up power in the event of a system fault or damage.’ Safety issues and environmental impact make many suspicious of the speed of the flying car revolution. eVTOLs might be cheaper than helicopters but won’t they eventually just replace road-based congestion with airborne traffic chaos and associated accident concerns? In real life, Syd Mead, the legendary illustrator who imagined exciting sci-fi tomorrows filled with flying vehicles in films like Blade Runner and later Elysium, is a bit worried. ‘The whole individual flying machine question would be easy to answer in North Dakota,’ he says, ‘but in the middle of the aerial traffic soup which characterises any metropolitan area, it is a genuine concern.’ Independent advanced mobility designer Dan Sturges is excited but with caveats too: ‘The part I’m not sure about is having our skies potentially become “black” with swarms of moving crap. But I can imagine self-flying taxis in managed air “corridors”, where the sound doesn’t impact others too much, and visually, the skies seem fine.’ That view chimes with that of Uber’s Moore. ‘We want to give local communities a say in where our sky ports are situated — the first ones will be at the top of elevated parking garages where some noise already exists — and we’re committed to our flying taxis all being electric so no local emissions. The idea is to make air taxis part of a multi-modal mobility solution, which opens up more efficiency compared to adding a highway lane or an additional subway stop.’ Moore even thinks autonomous versions of flying taxis could become mainstream before the much-vaunted autonomous car, freeing up the seat vacated by a human pilot in the process. ‘By 2028 they will really come of age and there is a pilot shortage anyway. Autonomous cars operate in a very cluttered environment. It’s way easier to manage the sky as other vehicles broadcast a signal on where they are.’ What’s more, in the sky there are no erratic kids or dogs running out into the road to consider and birds can be seen from far off.

Uber is currently in negotiations with the US’s Federal Aviation Administration (FAA) — especially relating to LA where year-round good weather should help the roll-out — but the issue of regulation is the ‘biggest challenge for the commercialisation of flying taxi services’, according to Joe Praveen Vijayakumar, a senior mobility industry analyst at global research company Frost & Sullivan. ‘Framing regulations for flying cars and for companies to comply with those regulations will take time. If air taxis are to become a mainstream mode of transportation you need to have landing pads and charging points for eVTOL crafts. In 2018, Uber and Volocopter unveiled some air taxi station concepts and we foresee buildings of the future being so equipped.’ The Volante flying car visualised over London. If Crossrail doesn’t end up being quick enough...

Local politicians and the public need to be onboard too. Alan Wapner, president of the Southern California Association of Governments (SCAG) which is the largest metropolitan planning organisation in the US, representing 191 cities and 19 million-plus residents, sees issues but also opportunities. ‘Air traffic and congestion management of these vehicles will be critical,’ he reasons, ‘but in terms of economic concerns, flying vehicles have an advantage in that they require much less expensive infrastructure than an elevated train or tunnel project and here in Southern California, congestion continues to worsen — Angelenos spend 100 hours a year sitting in traffic! Necessity is the mother of invention.’

Airbus’s Müller says his business is keeping its eye on the 130 electric flying vehicle projects around the world, including jet-based, inter-city eVTOLs with tilt rotor technology from the likes of German company Lilium, so competition is fierce and business cases varied. But ultimately, the design must not only function well, be affordable and as safe as other forms of flying, but also desirable, as the self-styled ‘visual futurist’ Syd Mead concludes: ‘Of the actual personal “flying car” notions, I like the Terrafugia concept the best (the current production vehicle is too ‘wingy’) because the design does not look ridiculous,’ he says. ‘I would not feel like some tech-nerd driving this down the freeway or back home and parking it in my driveway.’ Wise (and very grounded) words, Syd. This article was originally published in Blueprint issue 363. Buy the issue here, or subscribe to Blueprint