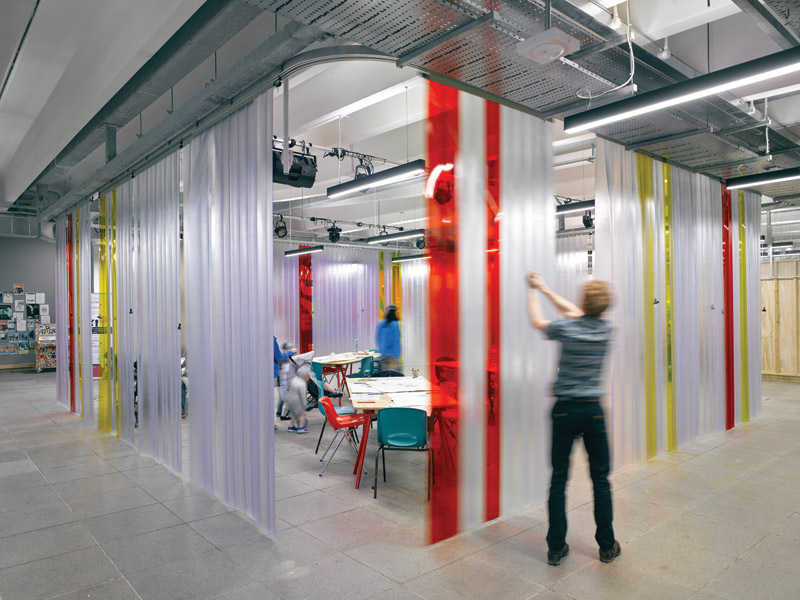 The new arts centre for Wrexham has been located in among a city market and multistory car park, to great community acclaim.

Three years ago, Wrexham’s cash-strapped council was taking some serious flak from sections of its community for a decision to build dedicated premises for local art gallery Oriel Wrecsam inside a purpose-built council car park from the Nineties, sharing the ground floor with an existing covered market.

Locals could be understood for querying the logic: after all, what does art have to do with parking, or markets? However, the prospect made sense for the newly combined local government departments of regeneration and culture, not just for economic reasons but for infrastructure: to attract people from the council estates on the far side of the car park, sliced off from the city centre decades ago thanks to a dual carriageway and huge retail parks that had been inserted between them. In fact, what better vehicle than a revived, street food-enhanced market and a lively, seven-day-a-week cultural offering, from art and dance, to theatre and music? A colourful PVC curtain can be drawn to create a more intimate space in the new internal public square. Image Credit: James Morris

Fortunately, a few months after the 2018 opening of Ty Pawb (Welsh for Everyone’s House), there is little sign of the antipathy that had locals pasting protest posters on the walls of this traditional market town. There is a decent crowd of maybe 30 people gathered in the new internal public square, listening to a classical guitarist perform inside the colourful PVC curtain screen that provides privacy from the market hubbub at these free Thursday lunchtime concerts. And there are even more locals around the corner, sat at the big, wooden sharing tables that now populate the area between the reformatted market stalls and a new line-up of pop-up food outlets. A first-floor ceiling has been removed over the central gallery, while plywood panelling half lines the upstairs circulation routes. Image Credit: James Morris

There is also a crowd of some 100 people milling around the gallery entrance, heading towards its state-of-the-art performance space to continue a day-long conference programme focused on resisting the evils of modern-day slavery. Ty Pawb’s artistic director Jo Marsh is delighted to see how the community is increasingly occupying all of its spaces. ‘It was kind of a marriage of convenience initially, or of serendipity,’ she says. ‘Oriel Wrecsam [now absorbed into Ty Pawb] knew we were going to have to move out of our old building. And we were going to have to deliver arts in a different way. Simultaneously this building was deemed not to be working. There are three markets in Wrexham, the other two are properly historic and beautiful. It was thought that maybe bringing these two together could work – for the future of both to be safeguarded by that coming together.’

And if the mood has shifted, it is thanks to Marsh and architect Featherstone Young’s shared vision for the whole ground floor, which allows Marsh to weave a huge range of cultural and retail activities into its supremely adaptable spaces. Permeability and flexibility are what this scheme is all about, says Sarah Featherstone, co-director of Featherstone Young, who dubbed its vision for this hybrid building ‘baggy space’, to infer a design that can meet the widest range of current and possible future needs. ‘I don’t think there’s anything we didn’t envision,’ says Featherstone. From pop-up pizza nights to music festivals, Ty Pawb can accommodate them all; it proved so recently when a major annual music event, Focus Wales, was at risk of being rained off, but a switch to Ty Pawb meant it could comfortably accommodate the acts in almost every spare corner of this building – taking particular advantage of the aforementioned performance space. A slice of the facade is painted black, with the name Ty Pawb picked out in silver letters. Image Credit: James Morris

A large chunk of the work that has been done to this building is invisible. While the budget of £4.5m is not insignificant – much of it coming from the Arts Council of Wales and Wrexham Council – according to Featherstone: ‘Probably 40 per cent of it was spent on services and heating and ventilation. Previously, the building was treated as more of an open-air market, so we had to start from scratch with heating and electrical and lighting.’ A further element of the crucial but invisible work comes from Featherstone Young’s planning of the whole ground floor to make the shared interior streetscape work: for example, breaking up the traditional grid of market stalls to create frequent cut-throughs between clusters of newly timber-lined stalls. This frees up flow between stalls and public areas, and reveals where the action is as well as the exits and entrances. To keep costs down, the gallery itself was crafted within an existing concrete two-storey structure in the western perimeter, previously reserved for the mayor’s own parking spaces. Says Featherstone: ‘We took the performance space and gallery walls away from the outside walls of the building, so there’s a sort of buffer zone. It was quite difficult to bring that main building fabric up to the right sort of environmental standards. We had to create walls that were fully insulated, as well as provide humidity and heating controls. And it works quite well that all the way round the back [of these walls] we’ve storage and back of house.

‘Otherwise, we spent the budget quite modestly, and reworked and reused as much of the building fabric as possible. We reused floors and added materials that were readily available, like block work and timber ply. Nothing was particularly expensive in that respect. Likewise the way we treated the outside of the building – we decided not to repaint the whole of it in the hope that it would look better.’ Instead, diagonal flashes of black paint attract the eye, with the name Ty Pawb picked out in bold silver lettering.

What was previously the mayor’s garage now features two exhibition spaces, a shop and the aforementioned performance space – for main funder Arts Council of Wales, dance and theatre were priority art forms for this region. Gallery 1 is the largest, at 250 sq m, and is fully temperature-controlled and suitable for large travelling exhibitions (Grayson Perry’s tapestries and ceramics will be a highlight this year). Gallery 2 at its centre is looser, more suitable for free exhibitions, and immediately adjacent to the performance space. A first-floor ceiling has been carved out above this central gallery to create an internal balcony and bring daylight down into the core from new, slimline lightwells sliced out of the previous structure’s roof plate.

This porous design continues upstairs with handmade plywood panelling half-lining the upstairs circulation routes – so visitors and staff can peer down and see the buzz below them – as well as apertures cut into the timber-panelled walls that line office and meeting partitions.

Porousness is also communicated in the wire mesh that separates the gallery doorway from the wide, light-flooded entrance hall. The mesh, says Featherstone, was chosen ‘to keep that permeability, but it’s also playing on the language of it being a semi-utilitarian, industrial building.’ She gestures to the high concrete ceilings above the ground-floor spaces, all painted white now, with pipes and ducts visible. ‘It’s really sculptural,’ she says. ‘The mesh is just borrowed from that. Even the market stalls, we wanted everything to go right up to the ceiling because we wanted to draw attention to this really nice roof going all the way through.’

The only other major structural interventions are two new glazed public entrances, which bring the total to four, encouraging percolation across the site – cheerful street signs painted on to concrete pillars (part of an uplifting and unified graphic signage strategy by Elfen studio) flag up the attractions both within and beyond Ty Pawb’s walls. On the sunny, south-facing side of the block, an area dedicated to building services and machinery at street level has been removed in order to create a double-height, 6m-high entrance that now floods the food hall with daylight. Currently that entrance is occupied by the volunteer-made caravan that Oriel Wrecsam deployed as a pop-up gallery for two years after it was moved out of its previous home in the town hall.

The scheme’s simple, robust palette conveys a delightful honesty and expediency as well as craftsmanship. Featherstone praises the local joiners who worked throughout the year-long project – Parry Joinery. She says: ‘It was a design-and-build contract, which is always challenging, but the guys that did all the panelling, all the doors and windows, they were just here from beginning to end and when things got tough these guys just kept going. They got what we were trying to achieve.’ Tying the whole scheme together, as well, is the work of Manchester-based cabinetmaker Tim Denton, who created the furniture used throughout the ground-floor public areas, (as part of the Crafts Council’s insistence that one per cent of build costs be given to commissioned art work). Hand-turned legs for stools, chairs and the demountable tables were designed by Denton and made with an assortment of helpers in local community workshops; he says the task of hand-turning a single detachable leg seemed a good way to make the achievement manageable for these mostly amateur volunteers.

It also chimes nicely with the project’s overall spirit of bringing multiple elements together to make much more of the whole; Denton’s craftsmanship is also apparent in the red lighting cages which hang over the food tables, as well as all the gallery’s shop furniture. As Ty Pawb settles into its first winter, Marsh is delighted at the way activity is blossoming within the new public spaces.

Coming from an arts engagement background rather than the usual curatorial one, she says: ‘I saw an opportunity in this co-existence. There’s a richness that comes from the intersection of activities that overlap.’ But she is possibly even more thrilled at the way in which neighbouring residential areas have been drifting increasingly towards Ty Pawb, as hoped. ‘The summer holidays were an unprecedented success. We put a lot of stock into the summer holidays because local families are a really key audience for us. There’s a council estate very close to us.

We wanted to make a big effort for there to be something free or low-cost on every day through the summer holidays, and that’s worked. People are coming back.’

The scheme has been announced as a 2019 Finalist in the Civic Trust Awards – and highly deserving of it too.