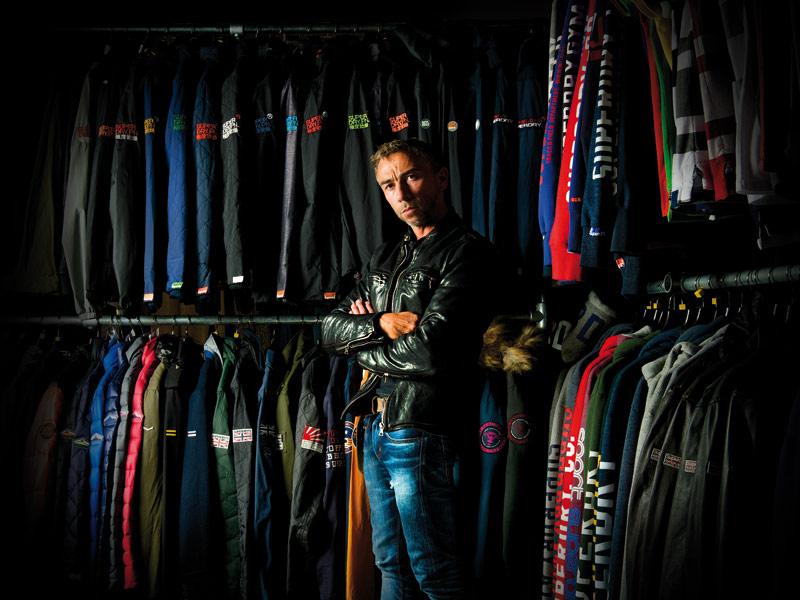 From selling T-shirts out of the back of his mum’s car, via Bench, to co-founding the phenomenally successful Superdry brand, design director James Holder is not one to sit back and reflect on success. He is always looking for the next new idea, whenever and wherever it comes to him: he’s an original beer-mat sketcher, he declares.

James Holder is a blurred image, a speeding car appearing as a ribbon of brilliant colours in a time-lapse photograph. Dynamic, energetic, friendly, with the slightly haunted look of a handsome, maturing rock star still travelling the fast lane. He is articulate, apologetic -- he is late, curses how busy he is, but laughs and adds 'In a good way!' -- and is absolutely passionate about his work. Holder started out selling T-shirts out of the back of his mum's car. Superdry's market worth is now put at £1.2bn

Now brand and design director of major, global retailer Superdry, Holder was once a 'magpie' teenager and fledgling entrepreneur; an enterprising, design obsessive, selling T-shirts from his mother's Austin Metro at skateboard and BMX events. He moonlighted at the screen-printing facilities of Leamington Spa Art College where he studied graphic design, and used his parents' garden shed for product storage. Holder even took the park furniture, on which he practised skateboard tricks and sketched design ideas, as his brand's name: Bench. Inside the Superdry store, Islington, one of a group of wholly owned or franchised outlets in 100 territories

'When I started Bench,' he explains, 'I had a deep love of typography. I came up with really high impact imagery for the Bench brand, and because it was going so well, it showed me what sort of effect high-impact imagery could have on a product. What was exciting for me was how I could take imagery and typography and use it on garments. That had never been done before.' Bench eventually 'got away' from him. While Superdry found its cultural references and nuances in Japan, it is a British company with its HQ in Cheltenham...

A promising partnership with a Bristol-based businessman soon turned sour, and when his majority shareholder decided to sell up, Holder was left with little choice but to relinquish the company he had started. To his credit, he admits he might have enjoyed too much success, too young. He also shows humility, claiming that he was perhaps not the most business-savvy person on the planet at the time. He believes, however, had he and Bench not parted company, Superdry might never have happened -- a karmic, existential observation that has its grounding in what was to come. The one constant, in what were difficult times, was his deep business connection and like-minded relationship with Julian Dunkerton. Now CEO of Supergroup, parent company of Superdry, Dunkerton was the owner of multibrand retailer Cult Clothing when the two first met in the early Nineties. An order for thousands of garments from Cult helped turn Bench from cottage industry to major urban streetwear competitor. 'We formed an early bond,' Holder explains. It was here they found the cultural nuances, inspiration and vision for the Superdry brand. 'There is no greater homage to attention to detail and intricacy of design,' Holder reveals. 'Hidden secrets you can do with typography and colour, and we both share a love of British tailoring. We combined it all together and created the Superdry corporate identity; the Superdry wording with the Japanese symbols over the top and those cheeky brackets around the symbols.' From the moment the design concept revealed itself in their heads and on paper they knew they had something really innovative and unique. This was not misguided arrogance, Holder assures me, but a genuine belief in product. There was no doubt in their minds that they could be as big as Ralph Lauren.

The turn-on was the Japanese angle, with its roots in Holder's childhood, and manifest in his later designs. I think I was very comic-obsessed when I was young,' Holder says thoughtfully. 'I was a big fan of 2000AD and those sorts of comics and that kind of drifted to manga, and it was then kind of clashing the two. You'd be taking wonderful, lumpy, bold typography, like Helvetica, or Avant Garde... and then clashing that with the high-impact dynamic of manga graphics; the sort of thing you'd see on the streets of Tokyo in neon lights, all running the whole way throughout their packaging. So, it was taking big, bold, classic typefaces and just throwing in this electric dynamic of Japanese influence, and it just worked so beautifully.' In 11 years, Superdry has developed from innovative start-up, with its founders sharing a computer, to global smash-hit. It has grown from five Holder-designed T-shirts, including the iconic 'Osaka 6' still sold by the company, and five polo shirts, to a prolific 6000 designs a year. Superdry is now sold in owned and franchised stores, and via its online presence, in 100 territories. Its flagship store is in London's Regent Street, and the company claims David Beckham, Leonardo Di Caprio and Pixie Lott among its customers. The brand has 3000 employees and, despite assumptions about its oriental origins, it is headquartered in nothing more exotic than Cheltenham. A collage of Superdry badges

In March 2010 ( a mere seven years after being founded) Supergroup, the parent company of Superdry, was floated on the stock market with a value of £395m. By December 2010 the market capitalisation of the brand had risen to £1.2bn. It had cornered the retail market with fresh and ground-breaking designs, laced with a seductively attractive Japanese vibe.

But great success can be fleeting, and there is no respite for the fast-moving and enthusiastic design chief. 'We are not basking in the glory of how amazing a garment is, and when you are selling millions of garments a year you could get caught up in your own hype,' he admits. 'This is the danger. People... completely forget the reason they started, and the incredibleness and electricity they had when... they were making those first products that people fell in love with. Whether it is the smallest accessory or the most beautiful, intricate, artisan, hand-finished leather jacket, we approach every single product with a blank sheet of paper. We think, how can we do this differently?' New lines for Superdry designs include ski wear, being launched this winter

For Superdry to stay at the top, both Holder and Dunkerton are of one mind: they have to be constantly progressing, pushing boundaries in design and business. 'As you experienced today,' Holder laughs, referencing his being late for the interview, 'time is very short, time is very tight in Superdry. It is a very accelerated world. So, what we do everyday with our team of 25 designers, from branding to accessories, from womenswear to menswear to footwear to denim to shops, is like being in creative heaven. It is a very galvanised company.' Holder leads by example. In the fast lane of design and with a huge product line to look after, he is forever on the fashion highway to Superdry's next style success. His mind is constantly ticking over with ideas that demand to be captured and distilled into the next million-selling garment or accessory. 'I could be sat here talking to you,' he tells me. 'I could be looking at a bottle we picked up in Harajuku (a district of Shibuya, Tokyo) and I could be thinking, my God that wording is incredible: where can we link that on to a piece of branding on a jacket?' It offers an insight into how he operates as a designer. 'I am absolutely a back-of-a-fag-packet or beer-mat sketcher,' he says with total conviction. 'Some of our biggest-selling designs have been taken from the most basic sketches. A good example would be our windcheater. We sold two million of these. It's a jacket with a double collar and three zips... an absolute adventure of a product, which was inspired by a bag on a luggage carousel. That was a proper beer-mat job.' At Superdry, nothing is ever quite finished. Holder is constantly driving the design team, and himself, to find off-ramps to exciting new ideas: 'No matter how incredible a design can be and what huge success we have with it, we won't then think, well we've made it, this is it, we're perfect. We never ever think that. The second we hit perfection with that product, we're thinking, how can we make it better?' For Superdry it is always about building on success without alienating the consumer, incorporating sub-brands into the original design, variations on a theme if you like, stretching style concepts and keeping the customer satisfied. The triple-zip windcheater is, for example, retained but reinvented and updated as the microfibre wind bomber, or the hooded Arctic windcheater, or the windtrekker for the men's market, or the wind hunter soft-jacket, or the Marl wind skier for women.

For Holder, nothing stands still. 'We are just launching Superdry ski wear this Christmas,' he reveals enthusiastically. 'We've this fantastic women's jacket. It's very retro, almost Eighties' Benetton it is so retro. That was designed on the M40 while my missus was driving. So, I was scribbling in the car, taking photos, sending it to China to the office. We were working tag team over the next few days between sketches and the jacket was coming to life in the sample room from just these sketches being pinged over the phone. If you've worked with a very dedicated group of suppliers that tap into the Superdry mindset, you'll know it's a very different mindset to most other brands out there.' From rough to reality -- the Intrepid Ski Jacket

Holder is that time-lapse ribbon of fantastic light, pushing on with his innovative and evolving designs. With Dunkerton they exhibit a ruthless fashion-cum-entrepreneurial cutting edge that underpins their brand's success. 'There is a kind of semi-mean streak, where you kind of want to annihilate the competition,' Holder admits. 'So, we've got this very tight team and everyone is best in class, super-talented and super-dynamic. You've got this... infectious combination of myself and Julian's drive...and you've got a love affair with product, always wanting to be the best.'

Then he's off. Returning to that ever-accelerating motorway to the next million selling Superdry jacket, T-shirt, bag or accessory. Off to the next design thrash-in, board meeting mash-up, or water cooler cloud-busting conversation with Dunkerton. Superdry, meantime, is all right tonight.