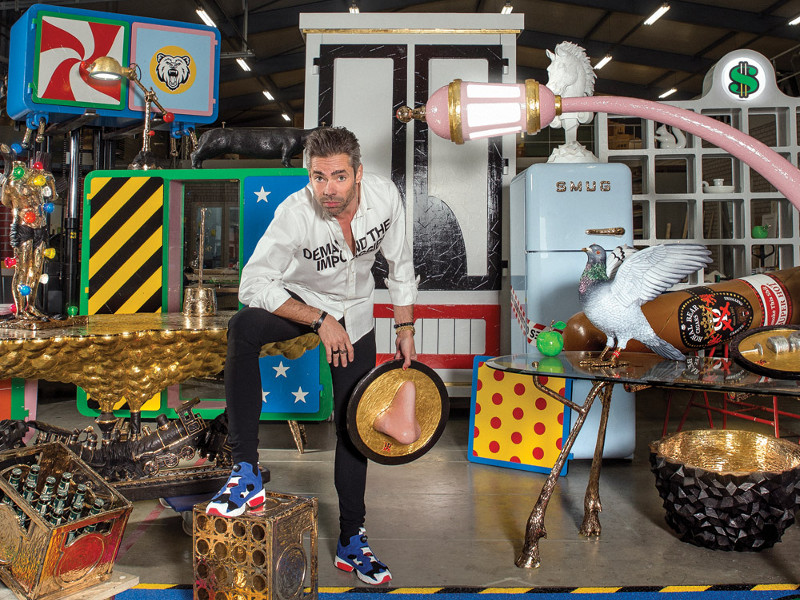 Netherlands-born and Milan-based Job Smeets set up his subversive design atelier, Studio Job, two decades ago. But after a public decoupling from his partner and a growth of his art practice, Smeets is setting his sights on an even more diverse and playful future

‘Italians are lovely. It’s not all about reading Excel spreadsheets like with the Dutch. It’s about working hard together but also having good fun,’ says Job Smeets over the phone from his Milan base.

After graduating from the Eindhoven Design Academy in 1998, Smeets set up Studio Job two years later in southern Holland and has been straddling the worlds of art and design ever since, having been featured in 400 exhibitions and counting. Over the past two decades, Studio Job’s back catalogue includes pieces as diverse as a bronze artwork of Chartres cathedral (2009) and postage stamps featuring the Dutch king (2013), of which 40 million have been produced. Design-wise, the studio has been prolific, from furniture, lighting and flooring among its collaborations for Moooi (2006–present) to clocks and condiment servers for Alessi and mosaic tiles for Bisazza (ongoing collaborations since 2012 and 2007 respectively). The studio has grown to over 30 people, from sculptors and stained-glass window artisans to experts who know their way around a 3D printer. In 2000, Smeets was joined by Nynke Tynagel, a graphic designer who remains his business partner today. Formerly husband and wife, the couple symbolised their romantic break-up in 2015 with a bronze piece, Train Crash Table, at Design Miami/ Basel which showed two steam trains colliding, a typically Studio Job ‘in-yer-face’ way of announcing a conscious uncoupling.

The current setup sees Tynagel based in the Studio Job office in Amsterdam, a mere 90-minute hop from those designers, metalworkers and painters who form the Studio Job Atelier based in Tilburg in the Netherlands. Milanbased Smeets meanwhile remains head of Studio Job and is art director and artist; he says that with FaceTime, WhatsApp and all the other modern communication methods in between, the long-distance business relationship works out well. Today, he’s ‘feeling very at home’ in Italy’s design capital, combining work and play with a group of creatives that he says ‘could be the new Memphis’. It includes artist Maurizio Cattelan, Gufram owner Charley Vezza and Stefano Seletti, who is at the helm of the design brand that bears his surname. ‘I was accepted as one of the guys — I was always on my own before,’ Smeets says, laying bare some of his psyche. He adds that it was freeing being able to work and socialise with designers, artists, fashion designers and musicians; developing projects together without having to define where one creative discipline ends and another one starts. He has form in this type of cultural cross pollination: he and his good friend Rolf Snoeren (of Dutch fashion label Viktor & Rolf ) were the creative thinking behind the slogan dresses that set Instagram a-liking early this year, with millennial-friendly motifs such as ‘Sorry I’m Late I Didn’t Want To Come’ and ‘I’m Not Shy I Just Don’t Like You’.

Of his move to Milan in January 2019, he says: ‘I was ready to make a change. I looked at the world around me and I always wanted to subvert it, to beat it. I was definitely ready to open a new chapter.’ To mark the occasion, he hosted a ‘housewarming’ event during this year’s Milan Design Week at the self-styled House Of Job, a new permanent gallery space for the studio in Porta Venezia, home to new sculptural work as well as classic pieces of product design from the Studio Job back catalogue. ‘I wanted to invite people into my home rather than on to an exhibition stand,’ he says. House of Job in Milan, which opened during this year’s Salone del Mobile and displays new and old Studio Job work, is intended as a ‘living gallery and studio space’. Image credit: Antinori

This merging of work and life is a theme revisited at intervals throughout Studio Job’s existence from 2011’s Studio Job House in Bergeijk in the Netherlands — where his and Tynagel’s weekend home evolved into a museum showcasing Dutch and Belgian design — to 2018’s Studio Job headquarters in Antwerp, which served as Smeets’ own residence as well as a workplace and gallery featuring art and design pieces ranging from large-scale sculptures down to cocktail stirrers. Containers I was one of Studio Job’s earliest sculptural art collections and featured its first full project in bronze. This was followed up with Containers II in 2011 with everyday household objects such as a coffee pot, pickle jar and a rubbish bin elevated to luxury status thanks to being formed with Val Saint Lambert crystal. ‘Plastic should have better PR,’ muses Smeets on this latest Containers iteration. ‘When it was first introduced in the 19th century, it was a luxury alternative to animal-based product,’ he says, adding that it wasn’t until recently that it became public enemy number one to the environment due to its single-use, throwaway nature. ‘When I first started working, it was in plastic; we shouldn’t see it as a material slave, we need to try and change that view so that people want to create gorgeous plastic objects.’

He also rails against wealthy Western nations simply solving the issue of waste by passing the problem on to poorer ones. He cites the example of the Canada–Philippines waste dispute where 103 shipping containers left Vancouver for Manila in 2013, mislabelled as recyclable when it was in fact household waste, resulting in a six-year diplomatic row, as a case in point. Job’s love of plastic was celebrated with Bronze = Plastic, a series of pieces including lamps made from both materials

Another string to Smeets’ bow is Blow, a collaborative brand between Studio Job and Seletti (so called after the priapic association with Smeets’ first name, geddit?) It’s billed as ‘a collection made for design lovers who are looking for special objects and furniture at an affordable price’, sometimes much to the chagrin of those dealing with Studio Job’s higher priced work, Smeets says.

What started in 2017 with seating shaped like a burger and a hot dog, a banana lamp plus more pop art-inspired objects including rugs, neon lamps, porcelain plates and mirrors, has expanded further this year. The Pop and Lock collection at Seletti’s Corso Garibaldi flagship store is a reimagined metal storage design from the manufacturer’s archive, which features Americana-inspired details such as a pop art pattern based on Donald Trump’s hair, hand-painted red stripes and white popcorn stars. There’s also the new Lazy Painter and Lazy President chairs, a tongue-in-cheek take on the American lazy chair obsession. ‘It’s a radical, crazy brand,’ Smeets says. That palpable sense of the kitsch espoused in the Blow brand can also be seen in Always Close, a project completed in 2018 for asset managers Creutz & Partners in Luxembourg that plays anything but safe. Located in a 19th-century building in the heart of the Old Town, it is four floors of eye-popping pattern and colour with more than 100 original new art pieces by Studio Job. Heraldic flags, hanging signs and a neon mouth in the window at the entrance are just the start. The ground floor has squirrel-shaped piggy banks and a bucket full of gold coins; the second floor has a conference room with a large hanging cigar, while down in the basement there are church bells on the ceiling, skull seats and a fridge with bronze bespoke handles spelling out the word ‘smug’. ‘It’s like a crypt of a church but in a funfair way,’ Smeets says. ‘The fridge may contain traces of Class A drugs.’ Studio Job’s signature OTT style is also in evidence in its free-standing ticket office project in the works for the Moco Museum in Amsterdam, which is dedicated to contemporary art and design. Designed as a sculpture in the main museum square, it has a gilt nose on one side, a metal fist on the other and a banana on the top. While it might be easy to dismiss Studio Job’s design style as not particularly serious or sincere, Smeets is as affected by socio-political reality as the rest of us. ‘The decay of Europe is an inspiration at the moment,’ he says. ‘The next generation has a lot to deal with: population migration, climate change, the whole structure of political systems.’ For 2019’s Venice Biennale, Studio Job has come up with Sinking Ship, a work in polished bronze and hand-blown glass of the Titanic, to remind us of the ‘infallibility of modern life’. Among Smeets’ upcoming projects is his first solo artistic exhibition in Tribeca, New York, with gallerist R & Company, which specialises in design from 1945 to the present day. The show is scheduled to open in summer next year and will establish Smeets’ art and art direction work as distinct from Studio Job.

Other possible ideas for the future include more writing. ‘Maybe a book,’ he says, ‘in English. I’d never write a book in Dutch. Everybody knows a bit of English,’ adding that the English themselves are not exactly renowned for their abilities in anything but their mother tongue. My protestations to the contrary are met with a playful demand for a few exchanges in both German and French. I think I passed the Smeets linguistic test. Speaking of all things European, he is in favour of Studio Job being based across three EU countries, despite uncertainty in the continent. ‘I love it here in Italy and there’ll always be a bit of DNA of Amsterdam,’ he says. ‘We always try to have a nice life.’

This article was originally published in Blueprint issue 366. Buy a copy here, or subscribe to Blueprint