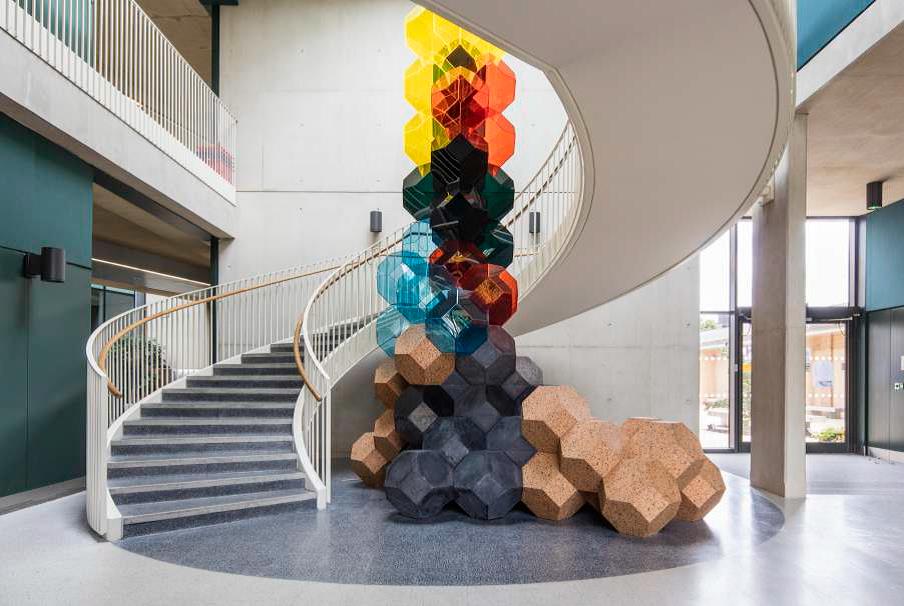 Award-winning, London-based architecture and design practice Draisci Studio has created a new sculpture for the Science and Technology Building at Oundle School, Northamptonshire.

Known for their sculptural installation designs and inventive use of materials, Draisci Studio is an award-winning practice that thrives on the interchange between architecture and design. Recently, they were commissioned by Oundle School in Northamptonshire to imagine an installation that would emphasis the role of the Sciences and Mathematics in everyday life.

In response to the brief, Draisci Studios decided to create an interactive artwork that would inspire pupils of the school to discover new ways of observing and experimenting with the world around them.  After all, most pioneering discoveries are made through practice.

The installation has been revealed and named STEM, as a reference to the space it exists in; it represents the first letters of Science, Technology, Engineering and Mathematics. The name ‘STEM’ is also an acknowledgment to the way that mathematical patterns always, surprisingly, manifest themselves in plants, nature, and organic growth. Made up of eighty modules, STEM takes the shape of a Truncated Octahedron – a geometric formation that tessellates, allowing the modules to fit equally alongside each other. The structure’s base is formed from concrete pieces, creating a link between the installation and the floor, as well as allowing for visible stability. STEM has been placed within the foyer of the Science and Technology building, with the staircase encircling the installation so that it almost becomes a sculpture in the round.

Further up the sculpture body, several units have been created from cork; these act as a contrast to the concrete base and can be used as informal seating for pupils of the school. Finally, above the cork modules of the installation is a section designed from four different colours of acrylic. This captivating element of the installation is see-through, allowing views of the staircase from varying angles and creating a gentle distortion of overlapping colours. Francesco Draisci, the founder of Draisci Studio said, "we see a strong link between the way the artwork consists of smaller parts making a whole, and the way individuals form a learning community with a recognisable identity."

The sculptural centre-piece of the Science and Technology building, STEM will allow viewers the chance to appreciate the dynamic relationship between the various materials and colours. Draisci Studios hopes that when light comes into the building from the skylight above the staircase, it will pass through the installation, enlivening the foyer with vibrant, colourful reflections.

As pupils and guests of Oundle School travel the staircase of the Science and Technology building, STEM will appear differently with its multitude of angles, providing inspiration for the viewers that there are always new perspectives to discover.