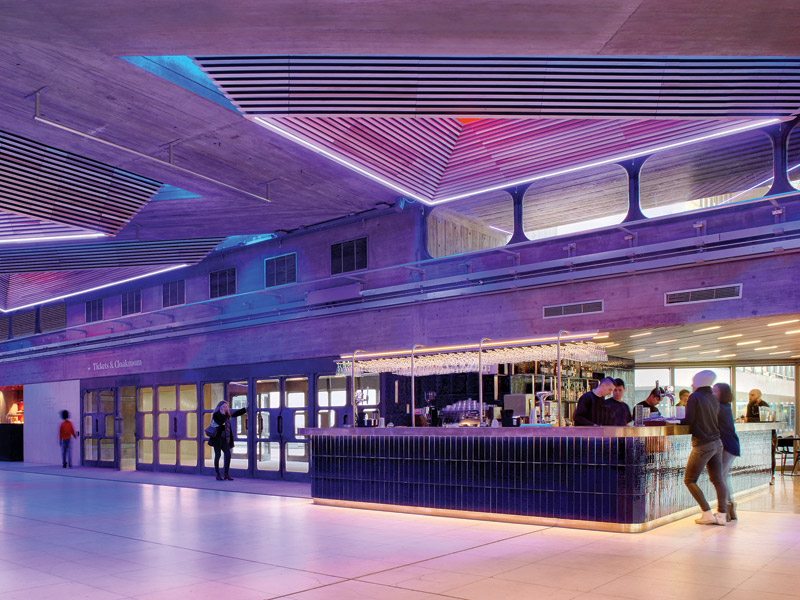 Bar & Leisure focus: There’s a new café/bar and interval bar by Archer Humphryes Architects at the Southbank Centre's Queen Elizabeth Hall, inspired by the striking brutalist building and and the light and colour 60s and 70s art movements

Rich indigo blue and red glazed tiles, bush-hammered concrete and satin brass are the dominant colours and materials employed for the new cafe/bar and interval bar at the Queen Elizabeth Hall’s refurbished foyer.

Archer Humphryes Architects, which was appointed by competitive interview for the interior project, has created an understated, elegant and welcoming space. The architect has enhanced and blended the building’s history with new contemporary elements that complement the original in an exciting and bold way.

‘Although the [1967] brutalist building is not listed, the design was developed by means of historical research, which referenced its location and vocabulary,’ says Laura Ferrer, project architect at Archer Humphryes. ‘The design had to meet a complex brief defined by the client, with the uses ranging from gatherings of hundreds of people for ceremonies, the brief but intensive service required for interval and pre-concert drinks, and the wide variety of events hosted within the Southbank’s programme.’

Prior to the restoration, the space had previously been used as a lounge area. As inspiration for its concept Archer Humphryes explored popular British art movements of the late 1960s and 1970s together with late expressions of post-war modern architecture. The existing structure and materials were retained, but the new bar/cafe, interval bar and seating areas were given their own language by employing strong colour and innovative surfaces.

‘The design responds to the concrete mega-structure of the Southbank Centre interior and its panoramic views of the River Thames,’ says Ferrer. ‘The interior’s excitement is generated through the use of hand-crafted glazed tiles thrown in Turkey and the execution of the dramatic details reflecting light and surface.’

The interval bar front incorporates bush-hammered concrete. This unusual approach not only maintains the focus on the concrete as an intrinsic characteristic of the building, but it also retains the connection between the past and present. A satin brass trim was employed at the base of both bars. The rich material was also used at the bottom of the new blue-leather banquettes and for the counter to the high-level stools.

‘The general light scheme introduced to the Queen Elizabeth Hall included the reinstatement of the inverted pyramidal forms across the ceiling alongside colour changing fittings,’ says Ferrer. ‘The use of black mirror surfaces sought to explore the light and patterns designed to create a retro 1960s op-art effect.’