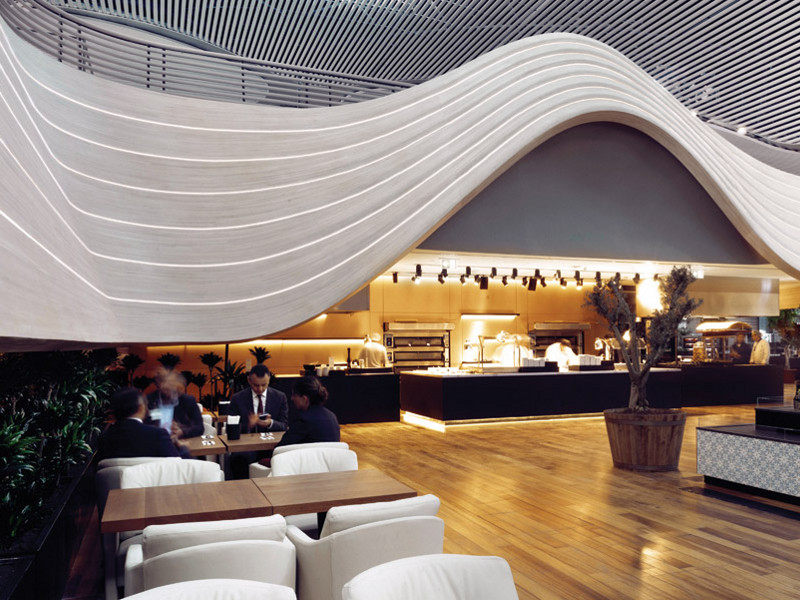 The Airport experience can be stressful, what with queues, lost passports, last-minute essentials, keeping a hold of a group or just the fear of flying itself. Apart from that last one, once in the air most of these worries melt away, as you are carried across the skies before landing in a different time zone, country and climate.

Attempting to make the time in the airport just as pleasant, Turkish Airlines has a new brand philosophy called ‘Flow’, which embodies a customer experience that is effortless, seamless, and uplifting, and it wanted a physical space in Istanbul Airport to reflect this. After an international competition Softroom was appointed to the project. The architecture firm has experience in the travel sector with projects such as the Virgin Atlantic Clubhouse at Heathrow, Virgin Atlantic Upper Class cabins, Eurostar lounges and a Virgin cruise ship. The design Softroom submitted was for 19,000 sq m of lounges joined by the ‘Flow Wall’, a parametric installation over a kilometre long. The wall’s undulating forms guide the passenger through the airport on a journey as smooth and ‘flowing’ as possible. Starting at the premium check-in desks, the various spaces and amenities needed by the passenger are connected by this singular wall – this, says Softroom, is ‘intuitive wayfinding, where the wall just leads you to where you need to discover’. That is if you haven’t been too distracted by the seven live cooking counters, sleeping suites or daybed rest areas, the cinema, newsroom, gaming zone, children’s play area, library, prayer rooms, work pods, or the museum display from Istanbul Modern’s own collection in the business lounge. Softroom has previous experience with parametric forms, recently completing a roof structure of glue-laminated timber and bamboo for the Orio Center in Bergamo. The form’s suitability for Turkish Airlines was apparent from its research in Istanbul in 2006, undertaken when creating the celebrated Jameel Gallery of Islamic Art at the Victoria and Albert museum in London, with Softroom saying it ‘had been struck by ribbon-like eaves as a building motif of Ottoman architecture, such as in the Topkapi Palace’. The design responds to the domes of Grimshaw, Haptic and Nordic’s terminal. Image credit: Büsra Yeltekin.

For this project, Softroom designed ‘a plywood structure with a surface of bleached oak. Seven flowing lines split the surface, one for each of the continents of the world – all connected by Turkish Airlines.’ The only break? A brief ‘punctuation’ of Turkish Airline’s crest at the entrance. Even a cinema is provided for customers. Image credit: Büsra Yeltekin.

The finished design also responds to Grimshaw, Haptic and Nordic’s airport terminal with its many domes. Underneath this, near the top of the building, the Flow Wall introduces a series of courtyards – open-air spaces common to Turkish design. The impact of the forms is amplified by the use of materials, where highly polished floors reflect what is above. The colour palette is simple, with black and white tones, while the LED lighting by Cinimod provides different ‘animated ambient patterns, including sending flowing waves of light across the rippling surface of the wall’, and can change colour ‘to celebrate important events such as the national day’. Softroom had a number of options for the ambitious design: ‘a CAD/CAM project like a giant surfboard’, or the preferred option of working with timber. This open attitude helped Softroom in the competition, but fortunately the firm was able to go ahead with its preferred choice thanks to Turkish company Ikoor, which had patented its fabrication technique when working on the interior of Zaha Hadid’s Heydar Alyiev Center in Baku. The technique is complex, and involves high levels of precision and care. Softroom explains Ikoor’s process of ‘engineered craftsmanship’: ‘It involved working with software to accurately construct a carcass from horizontal and vertical plywood members. Next, this surface was covered with two layers of MDF strips and one layer of white oak strips, successively glued, nailed, worked and adjusted until they precisely matched the desired geometry, and it was checked with topographical measurements during the whole process.’ Ikoor’s 280 staff worked double shifts for four months to fabricate the pieces in its Ankara factory, with a further four months on location with 60 staff to assemble the pieces. The project had a tight deadline, with only 30 weeks from being awarded the job to official inauguration. This meant Softroom had to work quickly too – with just six weeks before going to tender with its design. Seven lines split the surface of the plywood structure – one for each of the continents of the world, which are all connected by Turkish Airlines. Image credit: Ahmet Oktay.

The project accomplished a lot in a short time through good communication and working methods. Softroom had previously collaborated with Cinimod and structural engineers Atelier One, while a number of local consultants were regular collaborators of local partner Avci Architects. As Softroom director Christopher Bagot comments: ‘The Flow Wall is a groundbreaking project that transcends languages and which shows how creativity and technology can combine to reconsider the ways we delineate interior space and guide passengers through intuitive wayfinding.’