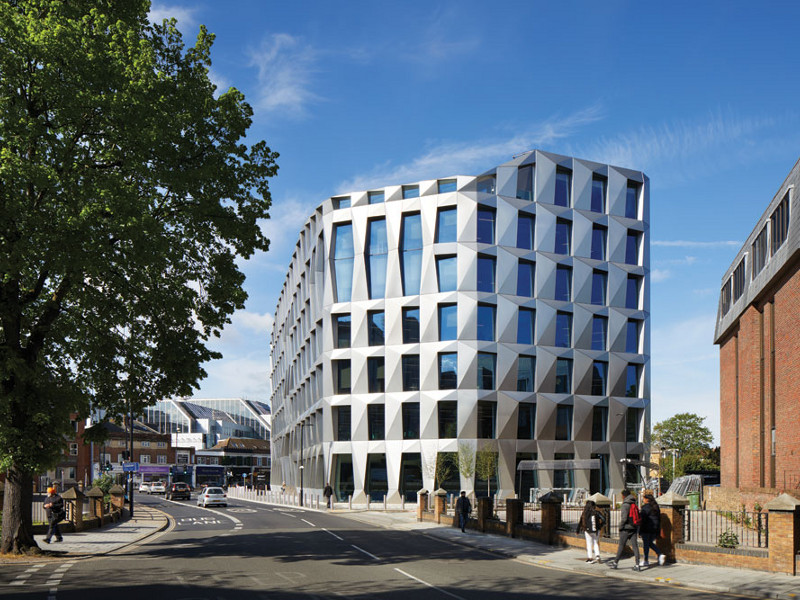 Accessibility and visibility were key requirements for this new, relocated civic centre in West London

Sitting at the end of the redeveloped Hounslow High Street, the new Hounslow Civic Centre is an unmissable fixture in the town centre. Its striking geometric facades of champagne-coloured anodised aluminium wrap around the whole building with a single repeating geometric pattern – but the angled panels rarely appear the same, taking on many hues in response to the light depending on their angle, the time of day, or the direction from which you approach. Accessibility and visibility was an advantage of the new site, its predecessor being out of the way in the middle of landscaped gardens – a picturesque setting for a sprawling brutalist building, but not practical for staff or locals. The old site has been sold off by the council for more profitable housing, while the new civic centre brings facilities including the public library into a more central location, making it easier for locals to drop in. Large atriums open up the civic centre internally and to the street, where depending on the light you can see key features of its design through large windows: an angular staircase pivoting between the floors alongside a light feature that also hangs through the connecting space between floors. The design is consistent inside and outside: the architecture team at Sheppard Robson and its in-house interiors team ID:SR started on the project simultaneously to set a unified agenda. The geometric motif is carried throughout the design – it’s used for wall decoration in meeting rooms, while similarly patterned carpet tiles from Milliken denote breakout spaces on each floor. The centrepiece staircase is made of dark timber set off by magenta on the underside – the brightest part of the colour scheme – with the predominant tones of the pared-back palette coming from the champagne aluminium outside and ash wood inside. A number of colours were considered, but it was important that whatever was chosen would be politically neutral. The building’s geometric motif is visible throughout

While the staff floors appear to be connected by both the staircase and the central atrium, they are not accessible to the public. The stair connects the ground floor to the public library, then separately links the staff floors. Soundproofing was necessary for this open space – acoustic panelling under the timber and on the ceiling between lighting and chilled beams ensures the noise of the public floors does not travel up to the staff areas. The only floor not connected by the atrium is the top floor, which required a large open area to serve as the civic space. It can be left open, whether for public consultations or to provide the council chamber, or it can be divided into five smaller rooms of different sizes. The rest of this floor is given over to the staff canteen area that hopes to encourage employees to leave their desks at lunch and enjoy the view stretching out across Hounslow and well beyond, whether through the large windows or on the south-facing roof terrace. Some compromises were made – for example, the furniture from previous council buildings has been reused rather than new items being bought

As a publicly funded building, both environmental and monetary efficiency is at the heart of the design. There are no opening windows, while the depth of the angular facade varies to offer the solar shading that each aspect of the building requires. Aluminium was chosen as a fully recyclable material, while the anodised finish means the building will self-clean – helping the council with maintenance costs. The design of the facade was influenced by the size of the aluminium sheeting to minimise waste, the largest panels – at the bottom of the building – used the full size of the available sheets. The architects worked hard to mix folds and joins across the facade to make the most of the light on the aluminium. Some finishing touches have been left off – for example, the furniture from previous council buildings has been reused rather than new items being bought. While this is a compromise for ID:SR’s design, the interiors still achieve a consistent design language with attractive spaces across the public and staff floors. The client seems happy and an increase in footfall suggests the project has been successful.