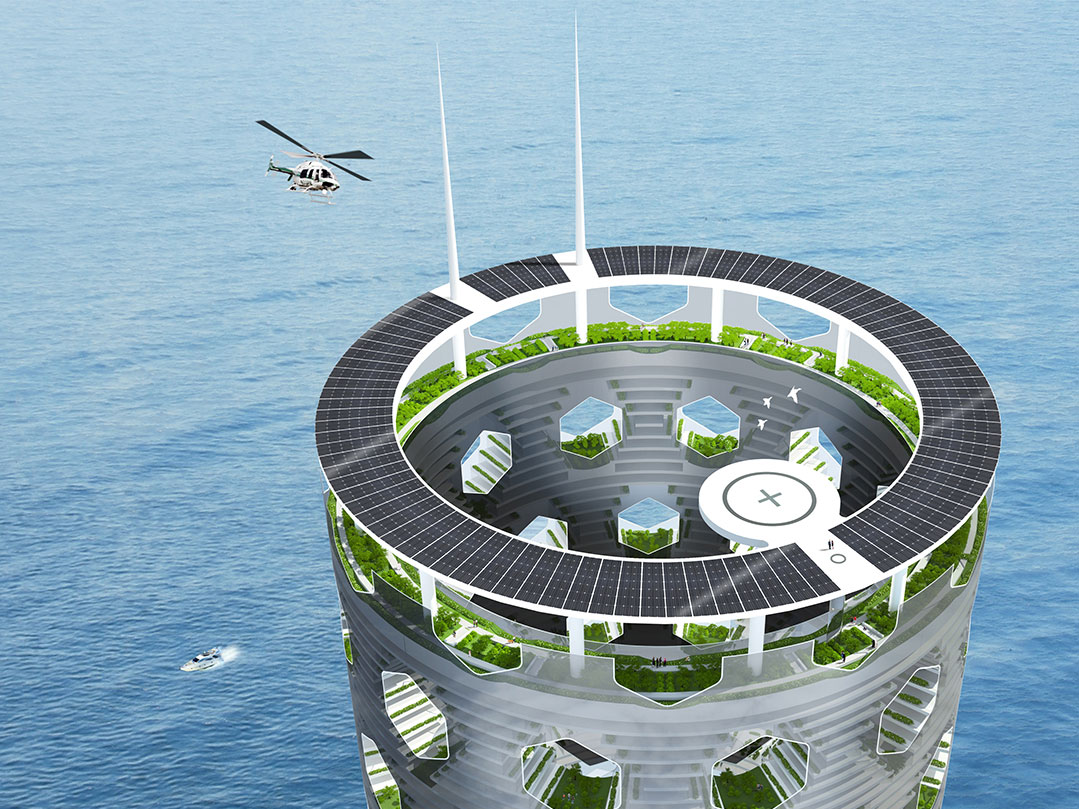 These megatall skyscrapers are not only sustainable, but built from the seabed up

As we reach the final stage to our future cities tri-series, we consider part three: vertical cities.

Read parts one and two.

Much like the growing number of skyscrapers in the world today, this concept also proposes building vertically; however, this city will be settled on the sea floor, making it perhaps the most impressive proposal of the three.

Keeping sustainability at the forefront of the project, Luca Curci Architects aims to build a zero-energy urban structure to address both population density and eco-friendliness. Although these vertical cities may echo that of the modern skyscraper, the similarities end there. While skyscrapers embody a compact form with a smooth exterior alienated from its surroundings, this project achieves an avant-garde twist with its open and perforated structure, plus implementing greenery on each level to provide light and ventilation. These green zones are located on most levels and provide a social space as well as private gardens. The purpose of the green spaces is to assist residents in achieving a healthier lifestyle - something many countries worldwide are striving for.

The skyscraper's key point of difference is that it is based on the seabed with underwater levels playing host to parking and technical areas. Facilities including spas, meditation centres, gyms and opulent hotels will be sporting impressive underwater sea views. If sea life swimming by while you're at the gym doesn't keep your mind occupied, I don't know what else will.

A semi-submerged bridge will provide access to the mainland by foot, car and public electric transport, in addition to regular access via water, land and air. There is also a helipad on top of the tower on the upper garden square, presumably as a quick-access route. The basement is fully equipped with internal and external docking facilities and three naval entries - allowing large boats to dock on the external berths. This way, smaller public or private boats may navigate into the inner gulf. Of the entire building, a huge 200,000sq m will be comprised of green space, that's 25% of the entire floor area (800,000 sq m) dedicated to greenery and supporting a healthier and more organic future.

Luca Curci Architects has crafted the building based on a 'modular structural prefabricated element' that is recurring both vertically and horizontally around the building. Being modular, the separate components making up the building produce a 3D network that is capable of sustaining each floor. Each repeated layer is 72m high and 155m in diameter, with 120m of free space within the building. Although the megatall skyscrapers are proposed to be 750m high, there are only 18 floors, which lead to the question of - what defines a single floor - in this multi-storey contemporary building. To put this into perspective, 432 Park Avenue, New York, is approximately 425m high with 89 floors. Therefore 18 floors will be able to provide a significant amount of space and flexibility within in level. A total of 58,000 sq m of floor space has been dedicated to housing, services, offices, stores and other facilities, which can host 2,500 inhabitants. Various levels of luxury are available to residents, ranging from apartments to duplexes and villas.

Architect Luca Curci of Luca Curci Architects proposes that, of the three future city projects, this vertically-focussed concept can be built sooner than the others.

'It's a modular project, so it can be built in just two or three modules to start, step by step.'

This way would be beneficial, given that the structure's effectiveness could be tested at the end of each stage to determine whether the energy savings outweigh the costs. FX Awards 2015: A snapshot of the evening

Is living together the future for cities in the Middle East?

Beehives and moons: Our future cities?