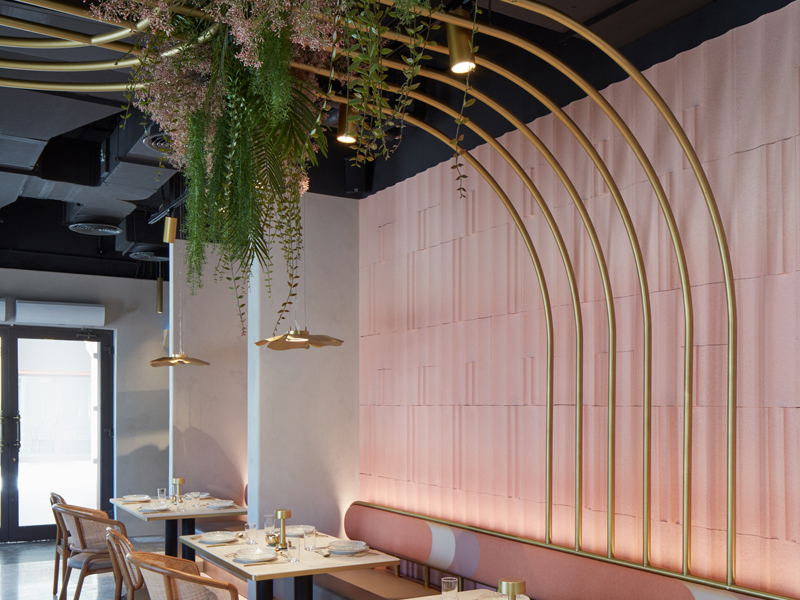 A popular Levantine restaurant in Dubai has been given an update by Roar, the interior design studio led by Pallavi Dean, inspired by the diverse ecosystem of a Levantine river valley

Words by Sophie Tolhurst
Images by The Oculis Project

The levant region is a large and approximately defined area, consisting of Cyprus, Israel, Jordan, Lebanon, Palestine, Syria, but sometimes also Turkey, Egypt, Greece, Iraq and Libya. The region’s cuisine, a rich mix of all these cultures, is perhaps most easily defined by meze, a mixed offering of numerous small dishes.

While Mezza House has successfully been serving up Levantine cuisine to Dubai’s citizens for the past two decades, in recent years it has needed an update to its interiors. The client recruited Dubai-based interior design company Roar, established by Pallavi Dean, to consider what a contemporary Levantine restaurant should look and feel like in Dubai today.

‘I have been a fan of Mezza House since it opened in the early 2000s,’ says Dean. ‘We wanted our design narrative to tell the original story of this iconic downtown restaurant and retain its legacy, yet reimagine it for the next decade.’ Beyond the framework of gold pipes the ceiling is exposed to maximise the low, existing height. Sprayed with acoustic foam and painted black, however, there is no loss to the dining experience

Capturing the cultural diversity of the region was important, and the team quickly came upon the Yarmouk River valley in the middle of the Levant region as offering ‘the perfect connotations’ for Mezza House because of the diversity of its ecosystem, which ‘encapsulates so many regional influences in one small patch of land’.

The Yarmouk River valley is where Jordan meets Syria, but beyond national borders it is also ‘where the lush riverbed rises up to meet the jagged mountains and where summer meets winter’, says Dean. With ‘an incredible array of textures and colours’ on offer as inspiration, it was simply ‘a designer’s dream’. As Dean adds: ‘It guided us in all our decisions, from the colour palette to the choice of materials and textures.’ Biophilia is one of Roar’s frequent points of return. The colour palette is landscape-inspired and there are many floral elements

Of this lush palette, rose pink and green come to the foreground, inspired by the Anatolian orchid and the Atlantic pistachio tree, both found in the valley. Levantine florals materialise elsewhere: a polished plaster wall relief above the banquette seating depicts the black iris – ‘rare, resilient flowers,’ says Dean – and among large bouquets of wildflowers hanging from the ceiling are pendant lights shaped like flowers, with delicate petals bent out of sheet metal. These and a number of other features were bespoke-made by Roar.

The use of colour gradients was again inspired by the variegated landscape of the valley: ‘If you stand at the bottom of the Yarmouk River valley and look around your feet, you can see the vibrant colours of the grass, the plants and the shrubs. As you gradually raise your eyes to the skies, the palette changes to the more neutral grey and beige rocks at the top of the mountains. The textures also shift from soft, smooth and round to rough, jagged and angular. We deliberately incorporated these contrasts all around Mezza House, from the back of the seats to the art on the wall.’ A sheltering, peaceful environment for the guests’

Bespoke banquette seating is upholstered in Kvadrat’s high-performance upholstery textile Chasm, using three colours to create a gradient effect, with the seat backs edged in gold piping – made of dull gold anodised aluminium. On the walls, uniquely moulded and ribbed GRP panels give the impression of handmade tiles; painted in pinks and blues, their colour and texture might offer some of the valley’s visual richness to the eye as it scans the room.

Spatially the restaurant is divided into different sections, and guests are subtly encouraged to move between the different spaces with a design feature of golden pipes curving overhead. As Dean explains: ‘The idea was to visually structure the space and create a delicate yet striking focal point. The gold piping became an obvious choice as it composes a subtle architecture without imposing too much on the space. I like the way the pipes draw arch-like compositions across the walls and through the ceiling as though forming a sheltering, peaceful environment for the guests.’

The brief also asked the design to separate the shisha (smoking) zone from non-smoking parts of the venue without disturbing the sense of unity across the space. Roar chose to create the divide with glass windows, so that nonsmoking and smoking guests can still dine as if side by side. Mirrors are used to keep the open feeling of the space, but also to maximise the view; because the restaurant overlooks Dubai’s downtown and the Burj Khalifa, strategically placed reflective roll aluminium helps carry this view throughout the space. For key points of transition, there are plastered archways or ‘portals.’ Echoing the curves of the arched pipes, their forms are highlighted by a strip of recessed lighting within the plaster surface

Following a number of extensions and works over the years, there were also variations in the building’s fabric to contend with. Roar made use of these differences: ‘Our design response was to give visual cues of the different functions and zones of the restaurant through the flooring type. We stripped off all the layers of the flooring to unveil that which was beneath. We retained some of the terrazzo tiles for the main dining area and some of the brick pavers from the outdoor patio for the shisha (smoking) zone.’

Wherever the diner sits in this Dubai restaurant to enjoy a meze menu, the interiors should transport them to the Yarmouk valley. Dean believes this is what restaurant design needs in ‘uncertain times’: ‘Now more than ever it is essential to call for “escapism” in restaurant design – creating worlds that have a slightly ethereal, out-of-the-ordinary edge will make the experience of dining out more special.’

Biophilia is a frequent touchstone for Roar because of its natural benefit to people’s wellbeing, and Dean’s choice of the rare and resilient black Iris is perhaps the perfect choice for the trials of the current period.

Furniture and lighting
Custom-made by Roar