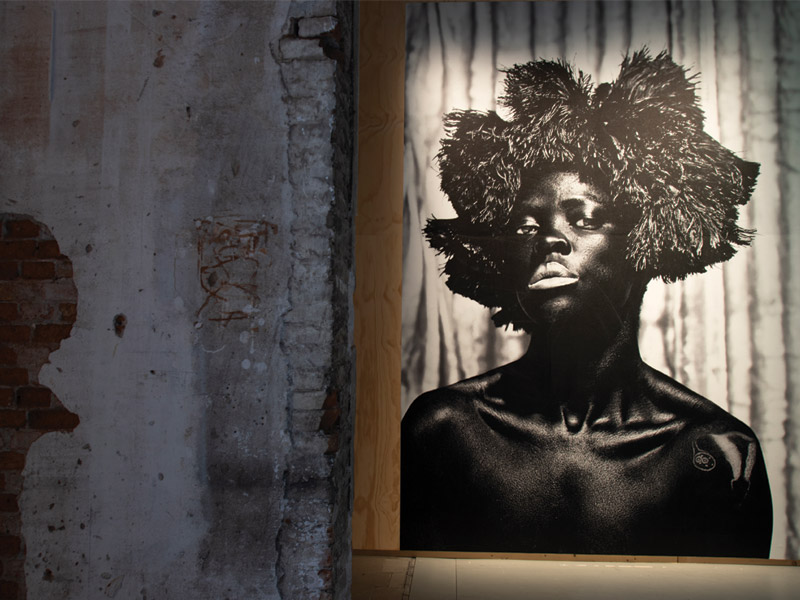 In many respects, the 58th International Venice Art Biennale is an emotional assault course, but nowhere more so than as you enter the main, monolithic exhibition hall of the Arsenale. Stepping into darkness — the better to see the many film and spotlit photographic works assembled in the first section — it can feel like a relentless parade of noise and intensity: strife, anguish, trauma, war, suffering.

The artists, selected by this Biennale’s guest curator, Hayward Gallery director Ralph Rugoff, certainly embrace the dark side of his brief: that alleged Chinese curse, ‘may you live in interesting times’. Works that stand out from the chaos include the US’s Arthur Jafa’s chillingly juxtaposed films of black-on-white, and white-on-black violence; Swiss-US Christian Marclay’s 48 War Movies, in which the titular films are squashed into a giant filmic sandwich representing 100 years of conflict, with their soundtracks similarly mashed; and the huge and haunting photographs of South African artist Zanele Muholi, who poses herself as a black and white minstrel or Medusa-esque tribeswoman, conflating mythologies and stereotypes both ancient and modern. This year’s curatorial choreography really comes together when the work is allowed to engage with the Arsenale’s generous volumes in the Corderie, such as Chinese artist Yin Xiuzhen’s Trojan (2016–17), a giant airline passenger crouching in the ‘brace’ position in her airline seat. Or Korean artist Lee Bul’s Aubade V (2019), a tower based on modernist utopian designs, constructed from rusting debris collected from the first South Korean checkpoint to be demolished in Korea’s demilitarised zone.

It is a relief to reach the distinct national pavilion environments at the far end of the Arsenale, including David Adjaye’s Ghana pavilion — the country’s first time at the Biennale. Adjaye has conjured a sequence of dark, elliptical chambers, their walls plastered with real Ghanaian mud. It’s a perfect foil for the exhibition curated by Nana Oforiatta Ayim, including works such as the spectacular textiles made of bottle tops and debris by Ghana’s biggest art star El Anatsui, or the eloquent three-screen eulogy for the nation’s threatened wildlife and landscapes by British-Ghanaian filmmaker John Akomfrah (The Elephant in the Room — Four Nocturnes, 2019). Barca Nostra (2019), the wreck of a boat which sank in the Mediterranean killing 800 migrants, was brought to Venice by Christoph Büchel. Credit: Andrea Avezzù

Sculptor Eva Rothschild, for Ireland’s pavilion at the Arsenale’s endpoint, offers us a breath of fresh air and a sit down with her exhibition, The Shrinking Universe. Rothschild’s robust forms evoke crash mats, scaffolding and building blocks, allowing inhabitation and interaction in a way that is rarely intended for either works of art or their ‘hazard’ architecture inspirations.

For his two curatorial spectaculars, in the Arsenale and Giardini’s central pavilions, Rugoff selected an extraordinary rainbow of nationalities, not to mention more female than male artists for the first time in the Biennale’s history. The 89 national pavilions strewn across the two main venues have their own agendas, but they too seem to be going all out to put forward their best female talent, as well as to challenge any visitor’s reserves of optimism. Imperialist walls within the German pavilion have been set up by artist Natascha Süder Happelmann to seep some kind of toxic brown sludge, the interiors either barren desert-scapes or occupied by a skeletal, scaffolding structure, combined with a throbbing, grinding sound work that makes you wish for ear plugs. Spain’s Itziar Okariz and Sergio Prego want you to witness vegetation being dissolved under spouts of acid rain, while Russia’s all-male curatorial team have created a glimpse into a hellish inferno of scorched automata and writhing red flames. There is no escaping the narrative (or the queues) for France’s Laure Prouvost, whose work requires visitors to plunge into a 20-minute, immersive journey through the sea, in a film and sculptural installation reminiscent of both Shakespeare’s Tempest and Homer’s Odyssey — certainly as rich in its imaginative worlds.

However, any disturbance caused by the artists inside the Biennale’s main venues is eclipsed by the rusted wreck that sits in the docks at the Arsenale’s northern end: a fishing boat which sank off the island of Lampedusa in 2015, drowning its cargo of 800 migrants. Representing the biggest Mediterranean shipwreck for decades, this ‘art’ work, called Barca Nostra (2019), has been salvaged and carted to Venice by the Swiss-Icelandic provocateur Christoph Büchel. No explanatory text was visible in the opening week — not that the collectors and gallerists would have noticed, as they stopped to take selfies beside it. It is generally true that the works which live longer in the mind and heart are those that give you space to react, rather than bludgeon you with the force of their apocalyptic narratives (and thrash metal soundtracks). Certainly that seems to follow through with Lithuania’s Golden Lion-winning installation, Sun & Sea (Marina): a beach opera, situated in an area of the Castello district that was formerly used by the Italian Navy. Seemingly peopled with everyday holidaymakers, on sand and loungers, the bikini- and speedo-clad protagonists occasionally burst into songs that articulate the stuff of life — from folk remedies for sunburn to fear of natural disasters. It makes for a compelling tableau vivant.

Also rewarding are the national pavilions that allow for inspired dialogue between art and architecture, such as the thoughtful sculptures and paintings (from Remy Jungerman and Iris Kensmil, respectively) in the Netherlands’ light and airy Gerrit Rietveld pavilion; both artists hail from Holland’s diaspora. In fact it is refreshing how fluid the boundaries of nationality are at this Biennale. Cathy Wilkes, who represents Great Britain this year, was born in Northern Ireland and has spent most of her life in Scotland (representing Scotland here in 2015). She has filled the Giardini’s bombastic building with an eccentric array of found or salvaged items, occasionally interspersed with moon-faced, long-necked, white, alien creatures; elements so strange, so intriguing they are, collectively mesmerising. Martin Puryear has done the US proud. The African-American sculptor, who is finally getting his due in his 70s, has created monumental sculptures, beautifully crafted, picking up on themes of freedom and migration — bearing witness both to the labour that went into them and the migrant blood sweat and tears on which the US’ wealth has been founded.

Off-site works also take the opportunity to sound out their surroundings, such as Sean Edwards’ Undo Things Done, a meditation on poverty, community and quilting for Wales in the chapel of Santa Maria Ausiliatrice in Castello. Or the sumptuously rendered installations of Portugal’s Leonor Antunes in the Palazzo Giustinian overlooking the Grand Canal. It may be hard work finding it, but Charlotte Prodger’s film for Scotland, SaF05, is worth getting lost for: in a small boatyard workshop beyond the Arsenale, her film layers the tracking of lionesses and nuclear submarines with tales of queer attachment and land use; landscapes often displayed out of sync with voiceover, mean we have to work to find the connective emotional tissue ourselves, rendering the piece somehow more personal, and more arresting.