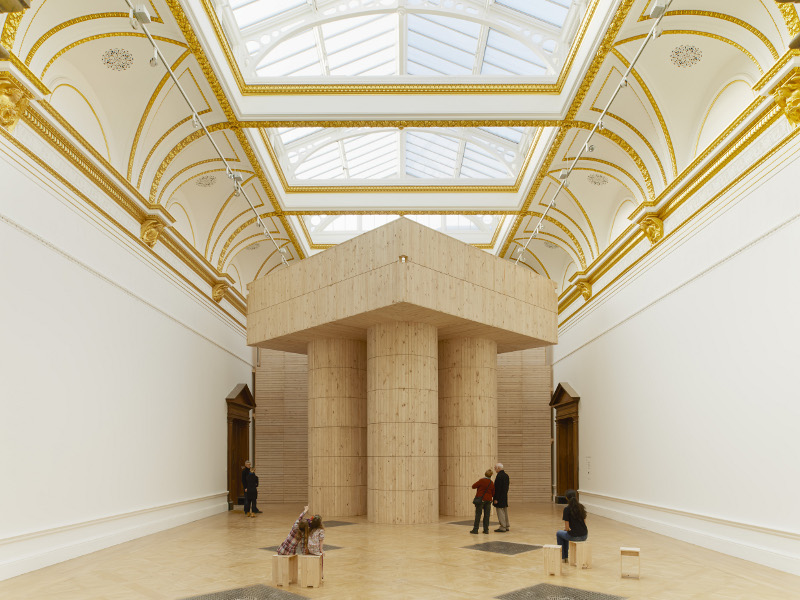 Raised high above the gallery floor, at the top of a monumental pinewood structure both futuristic and feudally fortified, you find yourself face-to-face with a gilded angel. The structure in question is 'Blue Pavilion' by the Chilean architecture practice Pezo von Ellrichshausen - the angel is one of many guarding the Beaux Art 18th century interiors of the Royal Academy Main Galleries. This is just one of the visual juxtapositions that make the exhibition Sensory Spaces: Architecture Reimagined an extraordinary show, featuring installations by seven architecture firms from across the world. The overall experience is a bit like moving through a tectonic gymnasium; from climbing the spiral staircases of the Blue Pavilion's cocooned cylindrical supports and descending its interior ramps, you move through Diébédo Francis Kéré's polypropylene honeycomb structure which squeezes through the doorframe of two galleries. In the same vein as artist Yayoi Kusama's Obliteration Room, the visitor is invited to insert a coloured straw into the honeycomb, thereby transforming the structure and its interior furniture into a multicoloured 'inhabited' space. Then there's Lia Xiadong's meditative study of Chinese notions of space in his hazel maze, the LED-lit floor panels leading to a central zen garden, and Kengo Kuma's secluded interiors where whittled bamboo stems rise together in interlacing arches, infused with scents of hinoki wood and tatami mats. Dublin-based Grafton Architects offer eloquent, inverted expressions of the act of enclosure in their sober geometric structures suspended from above, and regular collaborators Álvaro Siza and Eduardo Souto de Moura draw from the established architectural rhythms of Burlington House. Siza's abstractions of the courtyard's supporting columns can be viewed as you approach the building, while Souto de Moura has wryly modeled the elaborate archways of the galleries in high performance reinforced concrete. Each installation is essentially without function - it does not house, exhibit, protect, or produce. In a way, they speak of surfeit as much as the Beaux-Arts angels, who demand your full attention with their showy curlicues and gilty gleam. What's more, considering the progress being made in fields such as responsive architecture - the 'living technology' advocated by Rachel Armstrong or the interactive extravaganzas of Philip Beesley - the exhibition is hardly as 'sensory' as it could be. Installation by Grafton Architects. Photo © Royal Academy of Arts, London, 2014. Photography: James Harris. / © Grafton Architects
However, curator Kate Goodwin is doing something braver, more lastingly significant. Instead of providing the viewer with halls of 'scratch-and-sniff', poke-able projects, she has filled the 23,000 square feet of space with monumental expressions of how to live as expansively as possible: material, mass, light and form, as they are manipulated by some of the most insightful practices working today. Each installation is a suggestion of ideas that extend far beyond contained structures, enclosed spaces - the visitor leaves less with a sense of fulfillment than a promise of structural possibility.