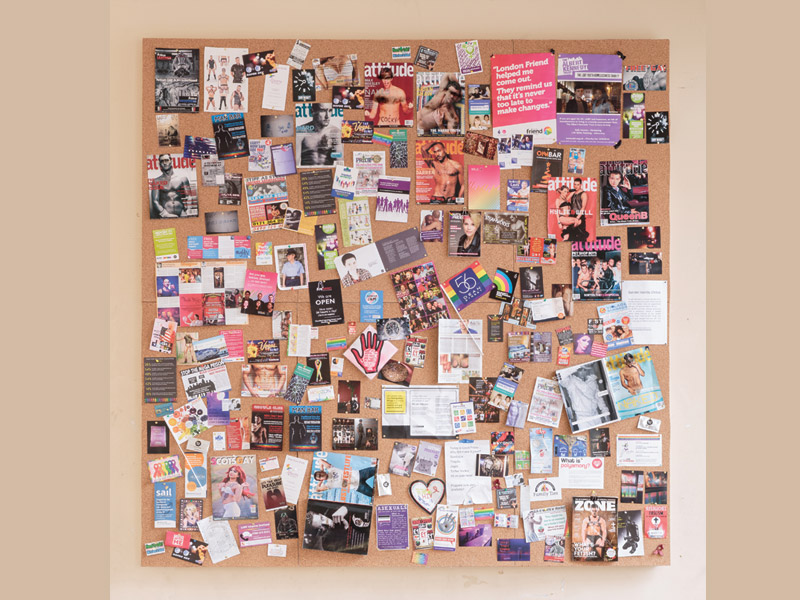 I once had a date in a bar housed across two Grade II-listed gatehouses at the entrance to Euston station. Now known unimaginatively as the Euston Tap, announced with a neon sign and a jacketless after-work crowd spilling on to the pavement, I had no idea that the Euston Tap had once been The Glass Bar, one of London’s few female-only spaces.

The Glass Bar is one of ten case studies in the Whitechapel’s current exhibition, Queer Spaces: London, 1980s – Today, which explores the transition of the capital’s queer scene over the past three decades. In a familiar tale, The Glass Bar was shut in 2008 when the landlord tripled the rent and backdated the increase.

In the decade to 2017, London has lost more than 70 of its LGBTQ+ venues. The city is supposed to be home to one of the queer citadels of the world, and yet the exhibition — hosted in the Whitechapel’s diminutive Gallery 4 — is a comprehensively researched record of community fightbacks against closures in a rapidly gentrifying city overwhelmed by market-led change, beginning with Thatcher and now on neoliberal speed. Rent hikes; demolitions to make way for luxury flats; or in the case of Soho’s First Out cafe — one of the few daytime hangouts for the LGBTQ+ crowd — demolitions for HS2.

In one of the show’s evening talks, assistant curator Cameron Foote elaborates on the story of The Black Cap, Camden’s foremost LGBTQ+ pub known for its drag drag-cabaret since the 1960s. Its closure in 2015 sparked a backlash and The Black Foundation was established. Foote, along with co-curators Nayia Yiakoumaki and Vassilios Doupas, has accumulated archive material on this uprising, from the letter issued by Camden Council approving the pub’s Community Asset Value status to highlights from the #WeAreBlackCap social media blitz.

First Out cafe in Soho, a rare daytime LGBTQ+ venue, was closed down in 2011. Courtesy Malcolm Comley and Robert Kincaid

Other case studies include the betterknown (and successful) campaign to keep the iconic Royal Vauxhall Tavern open. In beautiful work from UCL’s Urban Laboratory, an interactive map tracks the fates of various LGBTQ+ venues in the capital over time. This isn’t in the exhibition, but it is galling to note that London only has a single lesbian bar currently open, a tiny basement called She Bar. (The shuttering of queer venues is not just a pattern in London: witness the ‘regeneration’ of Manchester’s Canal Street.)

A small number of artworks provide commentary: The Scarcity of Liberty #2 (2016), an installation by Hannah Quinlan and Rosie Hastings, is a large notice board filled with collected flyers for queer events, gay magazine covers and public health leaflets — and is a clear portrait of the over-representation of cisgender white men with the bodies of Michelangelo’s David. (The Black Gay and Lesbian Centre was established in response to less-than-representative venues; Glass Bar founder Elaine McKenzie is still one of few leading women of colour on the queer scene.)

Doupas talks keenly about Tom Burr’s Blue Shoe Mirror (2005), a mirror placed on ground-floor level, taking inspiration from New York architect Philip Johnson, sexually closeted before coming out unambiguously in 1993, and his ‘blending of the public and private queer space’ as we see ourselves reflected and pass in and out. (I am never too sure how Johnson’s queer identity blends with his Nazi sympathies, mind.)

The most arresting piece is Ralph Dunn’s series of five photographs: Public Toilets (2004). The depicted toilet block, a notorious Lewisham cruising spot, has since been pulled down. Dunn’s photographs are a record of a now-lost civic, queer space. His employment of the flash — bouncing off the tiled walls — explicitly references his presence in the space; his belonging. It’s an active, not passive, work.

Ralph Dunn’s photographic series, Public Toilets (2004), documents a Lewisham cruising spot — a ‘civic, queer space’ — that has since been pulled down. Courtesy the artist

Queer Spaces has been put together because, as Nayia Yiakoumaki tells me: ‘There is interest in supporting London’s queer venues at the moment, but it doesn’t mean that government policies and public attitudes have changed. We feel the exhibition comes at a time when there are numerous organised actions and voices starting to be heard. But some are not aware of the struggles of queer people and the movement to save venues.’

As a reflection on the trends of LGBTQ+ spaces in the capital, the show is meticulously put together (much of the data comes from UCL’s 2017 study Cultural Infrastructure in London: Night Venues, 2006 – Present). It’s uplifting to see, in the collected materials, the spark and guts of a community which refuses to be erased, but it is thoroughly depressing to think that one of the world’s most progressive cities has a queer scene losing its glitter.

London mayor Sadiq Khan’s appointment of the so-called ‘night czar’, Amy Lamé (pioneer of lesbian club night, Duckie), was supposed to address this. But her record is far from solid and the future remains precarious. In truth, for a scene signified by the colours of the rainbow, the Whitechapel exhibition is a rather pallid affair, but if Londoners want to prevent the city calling time on its LGBTQ+ scene, it is at least inspiration to get our act together — and a reminder of how suddenly things can be lost.