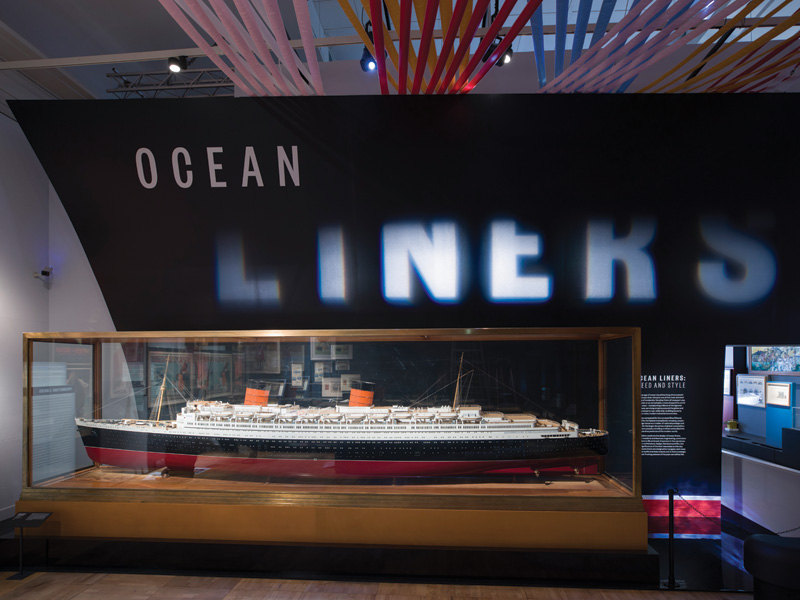 Ocean liners are the stuff of fantasy: a glamorous, self-contained world, with sleek art-deco interiors, where beautiful women in gold lamé glide down sensuous, curving staircases to be greeted by elegant men in evening dress.

As a new exhibition at the V&A, Ocean Liners: Speed and Style demonstrates, that was certainly part of the picture — but it also goes below deck to examine the origins of the liner, its engineering, the technology and the social changes behind the development of the vessels that revolutionised ocean travel from the mid-19th to the late-20th century. It is the first-ever exhibition to take a comprehensive look at the ocean liner as a physical and social entity across national and company boundaries, examining it through its material culture — in this case more than 250 objects.

It draws on the expertise of design, technology, fashion, maritime, architectural, art and cultural historians to evaluate the main developments in technology, interior design, publicity and sociology of the design of ships and the social rituals on board. The SS Great Eastern, designed by Isambard Kingdom Brunel, launched in 1859, — and built from iron rather than wood — was originally intended as a passenger liner, but proved too uncomfortable. Yet it set a precedent of new technology in the service of speed and eventually, comfort.

Some 11 million people emigrated from Europe to the USA on liners between 1900 and 1914, but the ships were also used to service the British Empire; transporting troops, civil servants and mail. When the USA changed its immigration policy in the Twenties, companies had to transform the image of a dirty, dangerous and unhealthy 19th-century form of transport into a highly glamorous, desirable and aspirational 20th-century one. They did so, as shown in the first section of the exhibition, with a mix of striking posters, ships’ models, imposing architectural shipping offices and luxury liner interiors.

Detail of Riveters, from the series Shipbuilding on the Clyde by Stanley Spencer (1941). Image Credit: ImperIal War museums

Walking up the exhibition’s entrance gangway, meant to evoke that of a liner, visitors enter a world of luxury that mirrors the scale and design of grand hotels over the period. An assembly of lavish doors, panels and furniture from the SS France (1912) — known as the Versailles of the Atlantic — is like an Edwardian hotel de grand luxe. This is followed by a selection of objects from the RMS Queen Mary (1934) and then the exquiste huge lacquered gold relief of Les Sports by Jean Dunand from the SS Normandie (1935).

These illustrate the curators’ thesis of the politics of style in liner design. The liner became a potent symbol of national identity and success; prized for its speed, design and luxury, but also importantly for its potential use in time of war. National governments sponsored and interfered in their design. The Normandie, subsidised by the French government, was the epitome of glamour and elegance, to be, according to its owners, ‘a ship which would embody the most modern artistic trends and be an exact reflection of the French nation’s genius’.

The British tended to go for a comfortable Country House style; the early German vessels opted for a heavy baroque ornateness intended to challenge British maritime primacy, while Hitler subsequently commissioned liners to promote his vision of Aryan supremacy.

After the Second World War, the Italians reacted with a Gio Ponti style and the Americans with sleek designs by Henry Dreyfus and Raymond Loewy, while the British responded with moderne interiors by Dennis Lennon and Hugh Casson. Luxury and fantasy is at the heart of the ocean liner’s image and is admirably demonstrated by the penultimate area of the exhibition, of ‘life on board’, including ‘on deck’ (complete with the then mandatory swimming pool) and ‘la grande descente’, the curving staircase.

These are populated by extravagant garments including Marlene Dietrich’s Dior suit that she was photographed in when sailing from New York — and a selection of glamorous outfits by Lanvin and Paul Poiret, belonging to socialite Emilie Grigsby. Lavish doors, panels and furniture from the SS France (1912) — known as the Versailles of the Atlantic. Image Credit: Victoria and Albert Museum London

The engine room is not forgotten — and the exhibition’s room focusing on ocean-liner engineering contains objects such as the pattern to cast the outer casing of the QE2’s high-pressure steam turbine (1969), displayed in front of the painting Shipbuilding on the Clyde: Riveters, by Stanley Spencer (1941).

The exhibition informs with a light but very enjoyable touch. The scenography designed by Casson Mann is very dramatic and atmospheric, giving visitors a real feel of different parts of the ship. Many of the objects are stunning, but each tells a profound story, be it personal, historical or technological. It is an unparalleled assemblage of poignant artefacts.

It would have been interesting to have had more information on the huddled masses for whom the liner may have been their first exposure to modern life. Understandably there is relatively little visual material still extant, although there are written accounts. The section of the exhibition dealing with the influence of modernism could also have been amplified.

Le Corbusier was a fan of liner travel, and many of the ideas and aesthetics find their way into his buildings (think of Unité d’Habitation). But these are small quibbles; this is an engaging show that covers all areas in the V&A’s remit and more. It knocks air travel into a cocked hat.