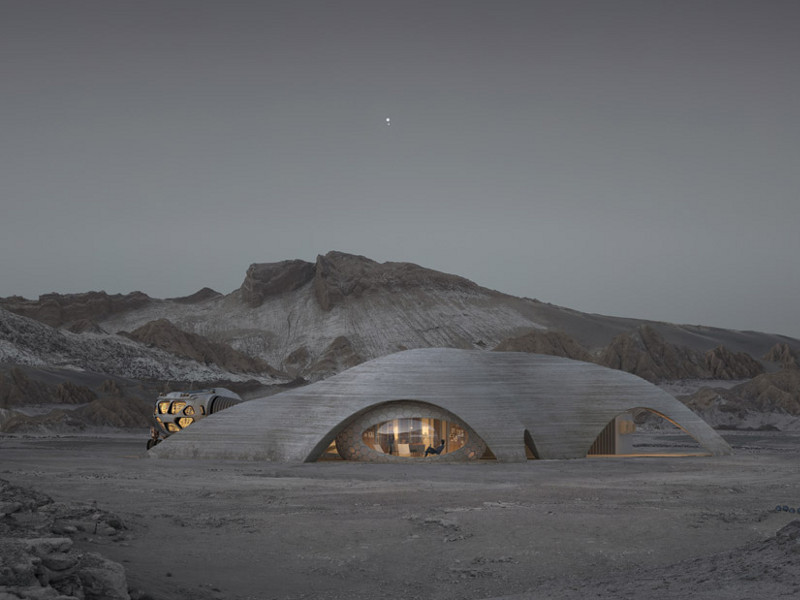 Until 23 February 2020
The Design Museum, London

Elon Musk wants to die on Mars, ‘just not on impact’. For the tech entrepreneur and founder of SpaceX, whose quote is featured in the Design Museum’s new show Moving to Mars, venturing to Mars is about humankind’s very survival. Stuck on Earth, we are vulnerable to an ‘extinction event’, whether self-inflicted through nuclear war or climate change, or from the type of catastrophic meteor impact that did it for the dinosaurs. A Mars colony plants the seed of humankind from which a new civilisation might grow. It’s a dizzying vision but, given the strides taken by SpaceX in its short life, not out of the realms of possibility.

This relationship, or often tension, between the imaginable and the achievable, fiction and reality, is at the heart of this fascinating, if a little uneven, exhibition. The question that immediately springs to mind is why this exhibition is taking place at a museum of design, rather than a museum of science. The answer, according to its curators — Justin McGuirk alongside Andrew Nahum and Eleanor Watson — is that because Mars is so inhospitable to humans (the extreme cold, dust and solar radiation mean we’d last little more than a minute unprotected on its surface), ‘there will be no experience of Mars outside an artificial bubble, whether in the habitat or a spacesuit’. Mars will require ‘the ultimate designed life’. The Mars Habitat project from Hassell would see a shelter created by autonomous robots out of Martian regolith. Image credit: Hassell + Eckersley O’Callaghan

The exhibition begins by looking at the origins of our fascination with Mars, which began as soon as we could see it clearly. There are some wonderful drawings by the 17th-century Dutch scientist, Christiaan Huygens, who was among the first to do so. Since then, scientific advances have gone hand in hand with Mars’ existence in the cultural imagination, a place of wonder but also of threat, whether in H G Wells’ The War of the Worlds, 1950s science fiction, or more recently in Ridley Scott’s film The Martian (2015).

While important for the exhibition narrative, this kind of thing is not what most visitors — who will no doubt comprise a good many children — are here for, and things really come alive with the full-scale replica of the ExoMars rover which is due to launch next year and land on Mars in 2021.

The next room shows us the type of terrain the rover would encounter on the red planet via a large video installation that aims to convey the barren vastness of the Martian surface. It’s here that the extraordinary scale of the challenge of trying to live on Mars really sinks in. Sci-fi has made us used to imagining the environments of other planets in terms of our own. Think of the way the most memorable planetary settings in Star Wars are actually ‘Earthen’ — sandy deserts, frozen hills and valleys, rainforests, remote islands. Mars is something else, oddly familiar yet totally unrelenting in its emptiness. A large video installation in the exhibition aims to convey the barren vastness of Mars’ surface. Image credit: Felix Speller for The Design Museum

The odd psychological effect of the installation succeeds in making the point that living on Mars is not simply about survival but about creating a meaningful and fulfilling living experience. We get an early glimpse of this idea, albeit applied to space rather than Mars, in several stunning early-Seventies drawings by the designer Raymond Loewy, who pointed out to NASA engineers that if astronauts were going to live happily on the early space station, Skylab, then they would need a window to the outside and a table they could all eat around.

The distinction between living and surviving is also fundamental to the Mars Habitat project envisaged by the design firm Hassell. Its proposal would see a shell structure created by autonomous robots from Martian regolith, which would provide shelter for prefabricated pods in which astronauts would live and work. The exhibition includes a 1:1 partial interior, complete with 3D-printed furniture and house plants. Whether this project is feasible or not, the essential thing is that it is identifiably architecture as opposed to purely functional engineering of, say, the Apollo lunar module. A replica of the ExoMars rover, due to land on Mars in 2021. Image credit: Ed Reeve

The exhibition does well to capture something of the essence of what it means for humanity to reach beyond its known frontiers, and what we might bring with us — both physically and philosophically — from one planet to another. A new project by Alexandra Daisy Ginsberg tackles this question directly through a computer simulation of how Mars might be colonised from Earth by plants and subsequently terraformed, but with no assumption that humans would necessarily follow.

Critics of the current fascination of going to Mars will inevitably question the political or financial motivations of its advocates and point out that we’d be better off fixing our planet first. This is usually countered by the important new technologies that will undoubtedly emerge (as they did with the Apollo programme), the species insurance policy and the simple fact that to explore is ‘in our DNA’. Yet as this exhibition begins to show, it’s actually more than all of that: it’s only through finding new horizons that we might begin to conceive the impossible.

This article was originally published in Blueprint issue 367. Buy a copy online here, or subscribe to Blueprint