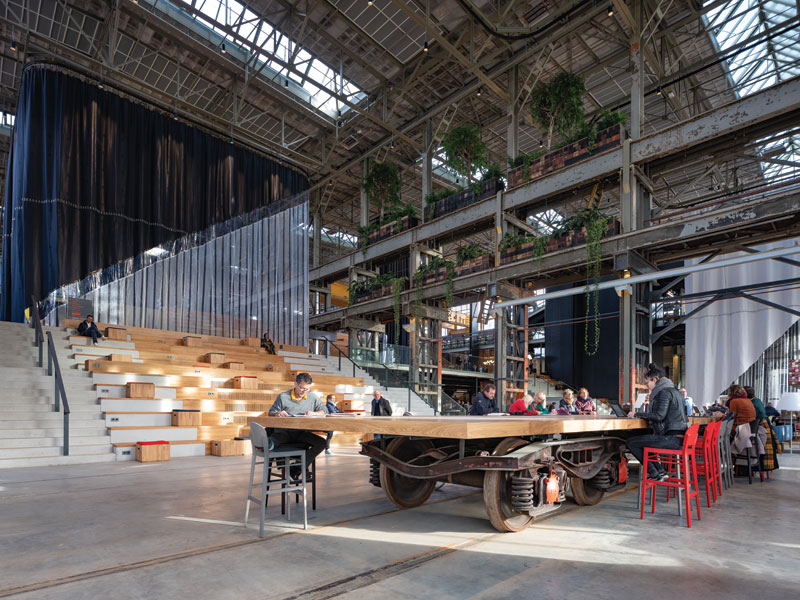 The Stephenson Quarter in the centre of Newcastle took its name from George Stephenson, the inventor of early locomotive, The Rocket, whose engineering works once filled the area. Not quite as well known, was the train and marine engine building company R W Hawthorn, which also had a huge engine shed in the area.

As locomotive building moved out of the cramped city centre, these fine old buildings took on a range of uses, with the Hawthorn Engineering Works ending up as a builders’ merchants before gaining a new lease of life as the North East Futures UTC school in a radical renovation by xsite. Partner Adrian Philpotts explains: ‘A particularly attractive part of the site was this listed Victorian engine shed made of brick with a slate roof and pine trusses. It was in need of refurbishment but there’s no way you could demolish it.’

Instead the engine shed has become a spacious, versatile space for the school, one of a new breed of university technical colleges established to provide a modern scientific and technical education for up to 600 14 to 19-year-olds. ‘Its aim is to give kids the opportunity to be innovators like Stephenson but around the area of life sciences,’ says Philpotts. ‘You have to provide teaching accommodation to the Government specification, so we did that by building a new five-storey block but setting it right next to the old building and stitching the two together so you have something unique. The hall can perform the big functions like assemblies and dining and a multiuse performance space. All the fabric and texture is still there, so it’s such an inspirational space. The new building has views over the old, and entrance is gained by walking across a bridge made from hot-riveted girders reclaimed from the original building.’

Architecture practices CIVIC and Mecanoo took a similar locomotive hall dating from 1932, next to the railway station in Tilburg, in the Netherlands, and turned it into a combination of a public library, cultural centre and co-working space called LocHal. ‘Everyone is welcome in the new living room of Tilburg, a world-class space for both young and old to read, learn and study, meet and gather,’ Mecanoo announced. The old tracks have been preserved in the concrete floor and the spacious cafe includes three large wheeled freight carriage-style tables that can form an extension of the bar, a movable catwalk or an outside stage. The industrial columns in the main space have also been preserved and fitted with wooden tables and lighting as places for reading and studying, while a giant wooden staircase with flexible seating elements provides both a link to the upper floor and an informal work area.

A disused but listed railway station in Luckenwalde, south of Berlin, was also turned into a library by ff-Architekten, with the aim of returning the building to a central role in the community. As well as converting the historic station buildings into a library, café and information centre, the German architect added a strikingly tilted, golden modern extension to form a new children’s library